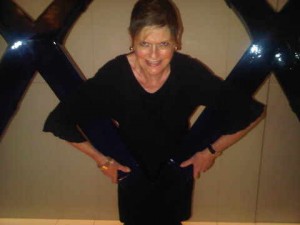 Restaurant entrances can make a statement, as Japanese owners have known for years (go in through hanging curtains and all the employees shout a welcome).  Some others have cottoned on to this.

In Hong Kong, enter Armani/Aqua, in Chater House, by being admitted through a black door, which reveals a 50-yard orange catwalk with infinity reflections either side.

At Jade on 36, on the 36th floor of Pudong Shangri-La’s tower, and you need to walk through, but not necessarily get entwined in, a 13-ft metal and lacquer ‘deconstructed rice bowl’, at least that is what designer Adam Tihany calls it.

Adam Tihany has one of the best brands in restaurant, and hotel design: interestingly, and relevantly, last night at the Forum conference that opened this week’s current International Luxury Travel Market ILTM here in Shanghai, Leonardo Ferragamo said protect your brand… 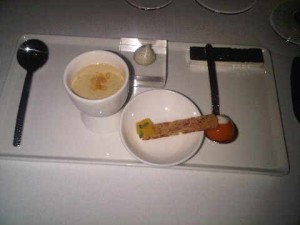 Jade on 36 place has several stand-out features.  It has a sensational view, across the Huangpu River – itself dotted with pleasure craft that are a kaleidoscope of fairy lights at night – to The Bund’s buildings, many of which are also illuminated.

Another is the faultless service, and yet another is the food.  See what naughtybusinessman says on cityweek.com.cn: ‘three hours of pure indulgence. Excellent service, great food and even a woman playing a harp!

The views are great and certainly the best brunch I’ve had and some of the best food in Shanghai. We’ll be back’. So the food, by the suave and bubbly Franck-Elie Laloum, a Parisian who has cooked at both the Michelin-starred restaurants at the Majestic and Martinez, in Cannes, and at the three-star kitchens of Pic, in Valence, and the Troisgros family, in Roanne (he has also cooked, for his sins, at the Mardan Palace in Antalya).

Tonight he starts us with what he calls appetisers, individual trays with, from left, a warm mushroom sabayon, a pinkie fingernail-sized seaweed meringue, a pinkie-finger of Iberico ham-smeared toast, a tiny ball containing liquid carrot and tomato juice…   next comes an appetiser, a simple bowl of chopped green asparagus bits with foam on top. 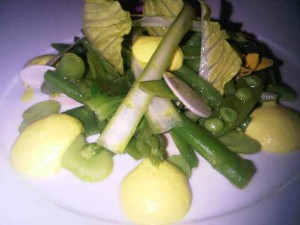 Salad with a modern-French twist

My salad, called Les Legumes Vert, is a mound of salad bits with blobs of dressing around.  My black cod, on a lemongrass skewer, looks like a slab of wagyu beef, pan-seared in Taggiasca olive oil, from Liguria, and served with spring onions and lemon balm.

My new friend Francesca is, indeed, having beef – fingers, yes more fingers, are set parallel, divided by equal sizes of foie gras, the whole caboosh held with lemongrass skewers, yes, more skewers.  The sommelier, has followed up glasses of Champagne from his ice-filled silver urn with his choice, Joseph Drouhin Côtes du Village 2010. 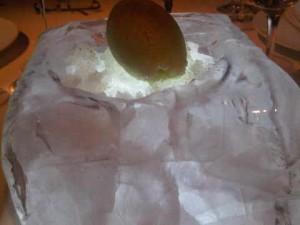 The meal, I assume, is finished (the conversation is definitely and divinely endless).  No, M Laloum thinks otherwise.  He sends out a postscript, individual bricks of ice that hold chipped ice that, in turn, hold dessertspoon-sized blobs of celeriac and vodka sorbet.

I go back up to my room, for I am indeed staying here – butler James Xing escorted me here in a fine royal blue Rolls Royce (the main dealer in Beijing, in The Regent Beijing, sold no fewer than 287 Rollers last year, and presumably his counterpart in Shanghai had the same success, and I am told by my good friend and business partner Amadeu Castanho that Rolls Royce has just established a dealership in São Paulo, despite the fact that final taxes will more than double the price). 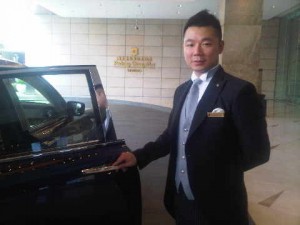 James opens the door of the Rolls

James is my butler. Now I will say it straight.  I do not ‘do’ butlers.  I do not want someone to unpack or pack for me, or open doors or squeeze my toothpaste.  But there are just a few who know the art of disappearing, yet instinctively re-appearing just when wanted.

James is one such genius.  He has been with this luxury hotel for five years, and moves in when he has a ‘child’ (also known as a VIP) to nanny.  I am here for you 24 hours a day, he says.

He researches his kid ahead of time, attends to their idiosyncracies, is discretion personified (I long to ask him who else he has nannied).  He has been to butler school, twice, and when not wearing a starched dress shirt and full tails he works in room service (sorry, private dining). 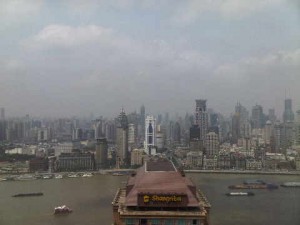 View across to The Bund from room 3362, Shangri-La Pudong Shanghai

There is a lot of thoughtfulness here, like two banks of four extra sockets, the full office kit that is Shangri-La standard, fluffy cashmere-type as well as fine cotton robes, and enough bananas even to satisfy a monkey.

3362 gives access to the 29th floor Horizon Club lounge, run by another real professional, Judy Leung, who defected from Shangri-La for a few years to help open the Fairmont at Vancouver Airport (where customers, she has to admit, did not exactly need the club concept).

Judy is elegant in a black tea dress with pearls, all uniform.  I escape from solid sessions of writing to head to the gym, empty except for two men who toy with equipment for about ten minutes and then leave, presumably having salved their fitness consciences.  After 30 minutes, I do the same. 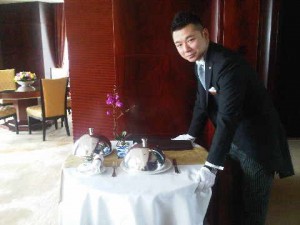 Bertie Wooster got jolly used to having Jeeves around

Later, I manage to evade James’ notice by nipping unescorted to the spa, for a memorably sleep-inducing back, neck and shoulders massage using my choice of element, wood, namely a chamomile and lavender concoction.

As I leave the spa, alas, I realise I have lost this point as James, white gloves and all, is waiting, which at least means I do not have to rummage for my key, to activate the elevator.

Later again, exactly at my requested hour, James knocks on the door, wheels in the requested lunch, tells me the kitchen is using a new oil for the fries, which certainly are light as air.  Somewhat grudgingly, I have to admit James is a definite asset and, as such, a contender for one of the best butlers in the world.