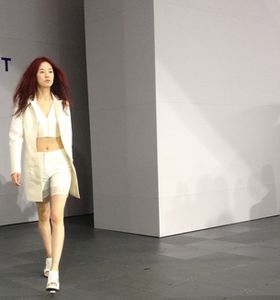 It is the twice-yearly Seoul Fashion Week – and actually much more fun than other fashion weeks because of the vivacity of the whole occasion. It is also sponsored by the Seoul Metropolitan Government, who make sure they have representatives (looking highly incongruous in business suits and ties) at each show.  Organised by Innocean Worldwide, and with other sponsors including Conrad Seoul, L’Oréal and Samsung, shows took place every 90 minutes during the period October 18-23, 2013, in three venues in an IFC building, conveniently next to the luxury Conrad Seoul hotel where the gal was staying. 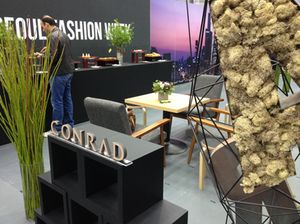 The hotel was prominent throughout. Many of the 74 designers stayed there, and on October 23rd it hosted the final gala.  For the whole event it looked after the VIP hospitality area in the IFC tower – and probably had to run three concurrent areas as shows take place on the 54th floor of the building and, a tiered venue, on the second floor and outside in a tent.  On the 54th floor, the VIP area was gathering point for hosted world media and for designers and hangers-on.  One of the most memorable had Helena Bonham Carter hair (=bushy), and a 1910-era squashed black hat, and a scarlet mid-calf dirndl frock with an orange shawl over. 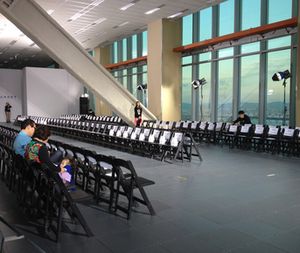 Waiting for the 54th floor show

She wore heels but 98 percent of the literally thousands of fashionistas patiently waiting in line to get into the Jarret show were in trainers.  A mother, probably the designer’s, got into the room first, with a baby. They waited patiently and then the crowds poured in, in neat lines. Three out of four were girls and with the exception of anyone previously mentioned, aged 16 to 27 and under 1.5 metres. Twenty minutes after schedule, the lights came up bright, the music blared and the first model, shown above, appeared. 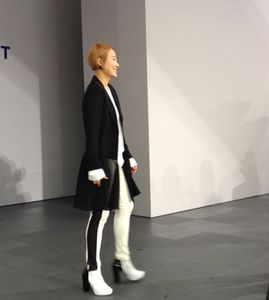 Jarret is the label of Ji Youn Lee and at the end she herself appeared.  As a blogger said the following day, her show was a mix of well-fitted pieces among oversized jackets and coats. Her main palette was black and white, with lots of plain all-peppermint or all-plain salmon and I would say when she got into patterns she lost her way, and she certainly is better at designing for girls rather than guys. The male models looked incredibly self-conscious in see-through jackets with wings at the back. 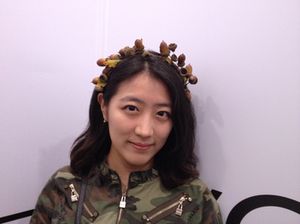 Fashionista on her way to the hall

Younger Koreans take fashion seriously and new magazines are starting up the whole time.  The October 2013 issue of Noblesse, an oldie that started way back in 1990, has 458 pages, including the cover.  Pick it up and one of the models might collapse. Fashion is for everyday life. We travelled up to the 54th floor of the IFC building with this chic onlooker, who had made her headpiece out of real acorns (back at my home, if she appeared in that a squirrel would immediately pounce – heard about an animal conservationist the other day whose only bête noire is squirrels because of their beady viciousness). 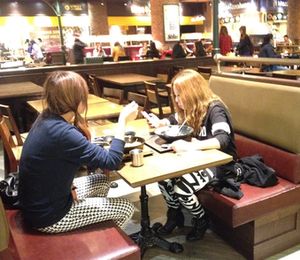 Yes, younger Koreans have a look.  We headed down to the amazing shopping mall that links, underground, the IFC buildings with two subway lines and the luxury Conrad hotel. At one of the many food courts in that three-floor mall, a couple were eating dinner, one of course on her latest-model Samsung. Fashion, out on the street – or down below it. And Seoul has one other exciting thing going for it, by the way – medical tourism. Bloomerg says the BK Plastic Surgery clinic in Seoul is getting amazing business from people travelling to the Gangnam area for chin implants and facelifts (BK owner Kim Byung Gun employs six surgeons and 30 interpreters speaking every language imaginable).