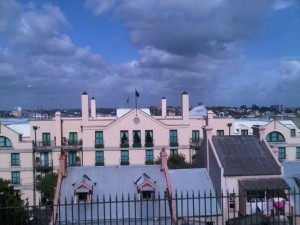 Looking north from Observatory Hill - it is 'pretty as a picture'

Running over the top of Sydney’s Observatory Hill, the gal saw what looked like a painting.  There to the north, down my side of Kent Street was a row of corrugated iron-roofed terraced houses, the kind of two-up, two-down type.

Across the street was the stately four-floor The Observatory Hotel and beyond and behind the hotel was Regent Seven Seas Voyager, towering over the scene.

Yes, Sydney has two cruise ship berths, the main one in Sydney Harbour, three minutes’ walk from Park Hyatt Sydney and this one, in the Millers Point area of town. 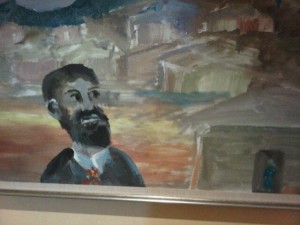 One of The Observatory's six (real-picture) Nolans, 'The Rainbow'

The Observatory Hotel is, not surprisingly, so called because it looks across at Observatory Hill, topped by the 24-hour Observatory, dating from 1858. The hotel is a mere stripling, built in 1993 by the Japanese company Nara.

The legendary James Sherwood, of Sea Containers and then Orient-Express fame, bought it in 2000, and put some absolutely sensational art in this luxury hotel.  Yes, these are real paintings; the portfolio includes no fewer than six by Sidney Nolan.  One of the nicest is Rainbow, showing a somewhat startled man with a beard. 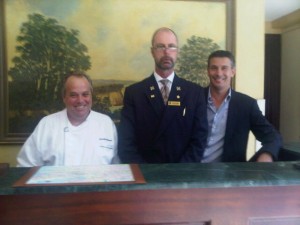 The gal then turned round and found her own man-with-a-beard, New Zealander Michael Anderson, one of Australia’s best concierges.  She turned around again for some more art.  Here is River Kwe, in the Philippines, again illustrating Nolan’s somewhat upset mind.

OK, Sir Sidney Nolan OM, 1917-1992.  He was a naughty boy, lost his wife Elizabeth because of his friendship with artists John and Sunday Reed – he had an open affair with Sunday but then went on to marry John’s sister Cynthia.

He was part of the Heide Circle, named for the house outside Melbourne where the Reeds lived (it is now the Heide Museum of Modern Art). Other Circle members included Arthur Boyd and John Perceval, and Nolan’s NEXT wife was Mary Boyd, a relation of Arthur and ex-wife of John Perceval. Nolan’s artistic following was highest in the 1950s-1960s – is he due for a resurgence? 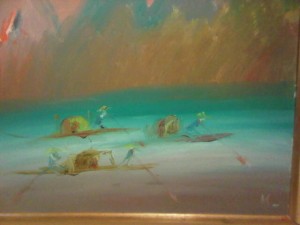 One of the six Nolans at The Observatory is part of the Kelly series, recognisable by a black square with two eyes.  The Irish-Australian bushranger Ned Kelly 1855-1880 is an Australian icon – some call him a Robin Hood – who was hanged in Melbourne Gaol for killing three policemen.

The black square, based on Kelly’s crude iron helmet, is a frequent Nolan symbol (Nolan deserted from the army during World War II). This Ned Kelly painting hangs over the fire place at the end of The Observatory’s long lobby, just right to look at, perhaps, as you enjoy afternoon tea 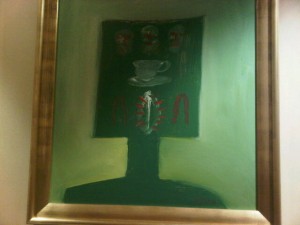 One of Nolan's Ned Kelly series

After such un-niceties it is a relief to think calm and beauty.  The gal headed down to the hotel’s basement pool, with its end trompe l’oeil painting of a beach with dozens of people about to leap into the water.

She went up to her room (301, The Observatory Suite) and fell into her mahogany four-poster, with its broderie anglaise hangings. Someone had thoughtfully put out a tea-kettle with sachets of drinking chocolate and Dr Stuart’s Valerian Plus Extraordinarily Good Tea. 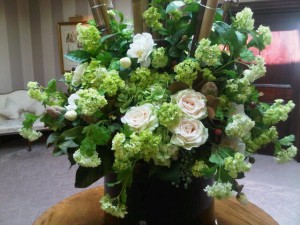 Flowers in the cupola lobby outside the door of suite 301

She preferred a glass of Duane Coates’ Organically Grown McLaren Vale Syrah 2008, and she caught up on her transport information by browsing Hamilton Ellis’ The Pictorial Encyclopedia of Railways.

Yet again, she thought, what reading material is put out in bedrooms tells so much about who runs a particular hotel – here, at The Observatory, the boss is the charming Ralf Bruegger, who as a young chef back in Dusseldorf looked through the Leading Hotels of the World book to find a hotel with a beach and a German General Manager, in that order, and as a result ended up wearing pale yellow Bermuda shorts with long socks at the Southampton Princess in Hamilton.

And then she thought of Orient-Express, owner of this lovely hotel – and so many renowned Italian properties (there, Orient-Express has just announced a gourmet package among its hotels, www.diningwiththestar.com, kicking off at the Cipriani, Venice, March 17-18, 2011.