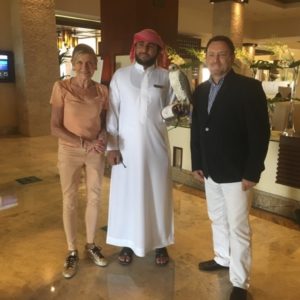 Welcome, from a falcon, and Jean-François Laurent

After Abu Dhabi, the gal could have been mistaken for thinking that Thailand was next on the itinerary but no, it was back to Dubai. Honestly, though, the serene Anantara Dubai Palm Jumeirah Resort & Spa, on Palm Jumeirah’s east crescent, is so plausibly Thai that it is a truly unique luxury hotel for this part of the world. Apparently Abdulla Bin Suleyem, the boss of Seven Tides, is such a fan of Thailand that he wanted this 519-room hotel to be as Thai as possible, even down to having some over-water villas. He was astute enough, however, to hire a first-class French GM, Jean-François Laurent, despite the fact that this was the applicant who turned up for interview in blue jeans, and on his BMW R1200GS 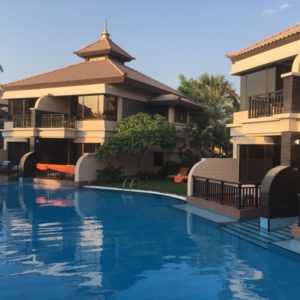 I loved villa 31 – see a video of it below. This is a beach pool villa, the blue-tiled pool about 40 feet long, the white sand immediately the other side. Walk up four steps from the resort’s wood-tiled road, just wide enough for a buggy, and you reach your outer courtyard. Go into the wood-floored, cathedral ceiling room, and thrust doors and windows open to outside. I meet up with Jean for dinner, and he tells me about his nonstop bouts of philanthropic fund-raising. He and Nadine drove the BMW back home to Toulouse last summer, through Iran and Turkey, every mile sponsored for charity. Tomorrow, Friday, October 21st, 2016, his chef, Maurice Fitzgerald, from Co. Kerry, supervises the preparation here of the world’s largest mound of mango sticky rice, to feed local children, and qualify for the Guinness Book of World Records. 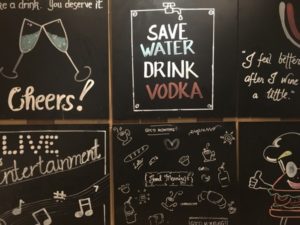 A thousand kilos of rice will be prepared, producing 3.5 tons that will be stored, outside next to the hotel’s own internal creek, in a mound that will measure 16 by 16 feet and around two feet high. This promotion is the start to the hotel’s second gourmet promotion, which runs October 23-29, 2016, and this year features Marike van Beurden, former pastry chef at Four Seasons Hong Kong’s Le Caprice restaurant; Xavier Caille, oyster champion at the Galway Oyster Festival in Ireland; Prin Poisuk, chef of Nahm in The Metropolitan, Bangkok; Michelin three-starred Claudio Sadler, from Milan, and Australian Tom Walton. Of course it is not surprising that a French GM takes food seriously, especially when he himself was once a chef. 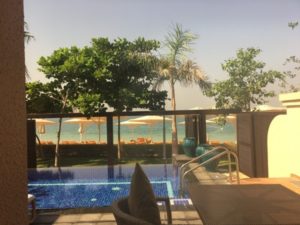 Final look over my private pool

Tonight, we start the evening with perfectly-chilled Taittinger on a longboat sailing around the Palm, to see skylines from afar: all the dozens of hotels blend perfectly, floodlit in golden or red light apart from the absolutely ghastly and thoroughly vulgar bright blue lighting that shows up the Rixos (that lighting should be banned). And then we head for the luxury hotel’s Beach House, for a sharing cone of yummy baby pre-meal calamari to go with a Gabbiano 2013 Chianti Classico. Great eating continued at breakfast, when I was really impressed to see the chef on duty at seven, and a menu that has a clear map of the multi-station buffets on its rear. Clever. NOW SEE THE VIDEO BELOW