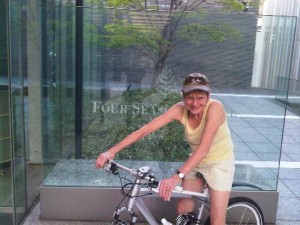 Not having been on a moving bike for nearly a week, the gal is going through withdrawal symptoms.  Take drugs away from an addict and it is known what happens.  Take sports gear away from fitness fanatics and guess what happens.

Half the hotel GMs in Tokyo this week are suffering pangs as their bikes have already been shipped to Ishigaki ahead of what I now see will be the ITU Triathlon World Cup 2012 this coming Sunday.  They are expecting 1,050 competitors from Japan, plus 50 coming in from overseas.

It costs JPY20,000 to enter, plus the three-hour flight from Tokyo and at least two nights’ accommodation.  The swim is two laps of 750 metres in Tonoshiro Fishing Port, wetsuit recommended; 40km of partly-hilly cycling and ten kilometres of flat running.  Good luck.

Anyway, my own withdrawal was temporarily assuaged by taking one of Four Seasons Hotel Tokyo at Marunouchi’s beautiful BMW bikes (which reminded me of my last BMW circuit, in Washington DC).  It was about 0545 and there was no traffic, so cycling the pavements I turned right along Marunouchi, went some way, turned right again, straight on and I came to the Peninsula.

The bike sensibly has the Four Seasons name and telephone number on it, in both English and Japanese.  I know a girl in New York who describes major cities in the world by proximity to jewellery shops.  My friend Anna in Dubai describes anywhere by proximity to the nearest Chanel store. For girlahead, it is map reading by hotels.. 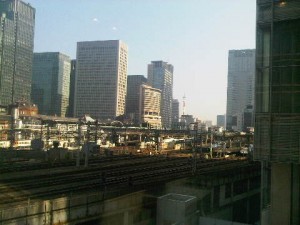 View from the window of 301, looking - silently - out at shinkansen ready to start their day

Transport in Tokyo is brilliant.  Even the spider’s web of subways and overground trains is now signposted in colours and English lettering.  Gone are the days when one would cry with frustration.  Which exit to take for a particular building?

Once, trying to get to the Tokyo Hilton, map in hand, I ended up diverting to a police station.  Hilton? Oh HIROOton, understood, that way, with a deep bow.  I love corner room 301 at this Four Seasons as it is on the level of, and only a few metres from, the Shinkansens at Tokyo Station.

Before going biking, I look out of my big picture windows and see the trains ready and presumably rarin’ to go.  Some will be going to Osaka, the route I took only a month ago.  No time to do that, this visit.  I cannot even HEAR the trains as the sound-proofing is so good. 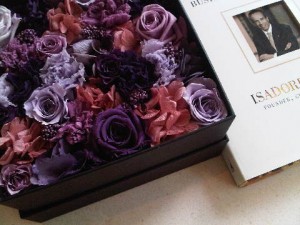 Subtle colours for flowers in the room....

The 57 rooms here were designed, way back ten years ago, by the lovely Toronto duo of Yabu Pushelberg (apparently they were doing Richard Li’s house in Toronto and he said, well, why don’t you do my new hotel, and this is how George Yabu and Glenn Pushelberg got into hotel, as well as residential and store, designing).

Richard Li is one of the two sons of Li Ka-Shing and one of his own companies is Pacific Century Cyber Works, which owns this tower, which is 31 floors in all.  The hotel operates on floors one (ground) up to seven, which, in rather Alice In Wonderland style, has reception.  Yes, you check-in at the top floor, and then go down to your floor.  301 is therefore four floors down from reception.

I kept on pushing the wrong direction buttons.  Actually were there not other things to do I would have spent much more time in the room, looking out at the trains and enjoying the calm ambience.  Colouring is muted, as is the flower arrangement.  One of the standing closets is completely covered in mother of pearl, the big desk is covered in hand-stitched grey leather. 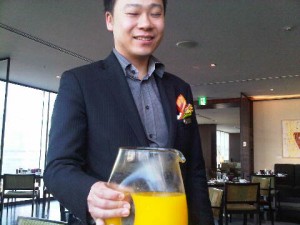 ..bright colours of the breakfast juice (and Masaru-san's Etro handkerchief)

After my bike ride, I am given my room key in an elegantly-printed envelope.  A Jura espresso machine, with paper cups as well as china, and jugs of fresh juice await post-exercisers and early-leavers. I head (yes, back up) to breakfast.  Masaru-san comes by with juice.  He wears the hotel uniform, Ralph Lauren suit with Etro handkerchief.

Etro will, apparently, bring a selection of (ladies’) clothes here, to the hotel, for one to try on – the locals love Etro, and pitcher Daisuke Matsuzaka is face of the brand. Certainly, right now I feel underdressed, particularly since everyone else breakfasting at this early hour is a dark-suited Senior Executive.

As one expects with Four Seasons (and one SHOULD, but not with justification, expect in every luxury hotel), the quality of the food is outstanding.  The multi-grain toast is so more-ish I ask for – more (well, there are four butter shapes so they need to be put to use).

A complimentary blueberry smoothie matches the aubergine-hued water tumbler.  Interestingly, the jams are Japanese, although I cannot read the maker’s name. The service is managed by a cool Australian, a former restaurateur called Gerard Eady, who is here at 0700. 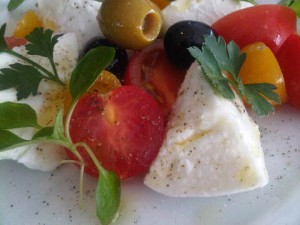 At lunch, tables of other Senior Executives are joined by groups of Office Ladies, and Ladies Who Lunch.  All are slightly too old for the latest Tokyo fashion, which requires long hair, sometimes dyed straw-coloured, a jacket, very short and tight shorts (sometimes torn-off blue jeans) over thick-denier black tights which emphasise the Japanese leg shape.

The look is definitely finished off by high-high heels and, sometimes, by the addition of a four-wheel wheelie bag in a bright colour, sometimes fuchsia.  Anyway, back to my lunch.  Oh the taste of every little tomato in the salad, so so good.  Were I by myself, I would have stayed at my leather desk and ordered the 15-minute menu, which appetisingly includes both a garden-green salad and an order of French fries and truffle mayonnaise. 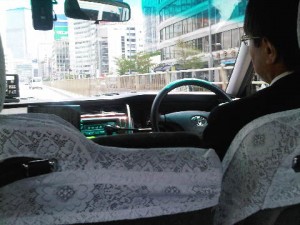 .. whereas the black car, with white lace seatback covers, is driven by a black-suited man in pristine white gloves

I pack my own wheelie, the black, two-wheeled Porsche Rimowa that is clocking up miles faster than any triathlete. It is taking its own journey.   I, meanwhile, get into a car, which of course has lace headcovers and probably the boot holds a feather duster and all the cleaning equipment the driver might need.  It probably stocks a supply of the pristine white gloves he wears, embellished with the MK logo of his company.  We head away, sadly, from Four Seasons.