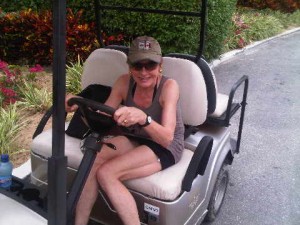 Solar-powered buggies – golf ones, although baby carriers too, perhaps – make a lot of sense in a land where there is searing heat day in, day out, and you long for cool (as here on Anguilla).  The gal first came across them in Rajasthan way back in 2008. HH Maharaja Gaj Singh II of Jodhpur is a Victorian-looking guy with bushy white beard above his tight army-style uniform.

One of his many prides and joys is his collection of old cars, which includes a 50 year-old Rolls Royce with a truck-style rear to carry the local cricket team.  Another is his collection of solar-powered vehicles, including bicycle rickshaws.  All have giant panels fixed horizontally above, in some case extending beyond the vehicle below.  The buggies at Cap Juluca are much more modest – many probably do not realise that the roofs above their heads are formed of small panels soaking in all those beneficial rays. 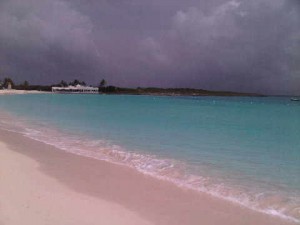 Looks like marble but in fact is beach, sea and powerful sky....

So here we are in the Caribbean, on the island of Anguilla, named for its long eel shape. Since 1980 it has been a separate territory in the British Commonwealth. You drive your buggies on the left, just as in the UK, though of course there they drive cars… Anguilla used to export cotton, fustic, indigo, mahogany, rum and sugar (now it imports, including tourists).

It competes for those tourists with other Caribbean islands and also with other destinations with beaches and amazingly coloured sea – Mauritius, Seychelles, the Maldives, Thailand, French Polynesia and so on. New competitors like Sanya come into play the whole time. And some of those competitors are easier, and less expensive, to access, and when you get there you are bowled over yet again by the amazing service. Stay at Sonu Shivdasani’s Soneva Kiri on Koh Kood, in the eastern sea of Thailand, and you appreciate what an a true luxury island experience can be. 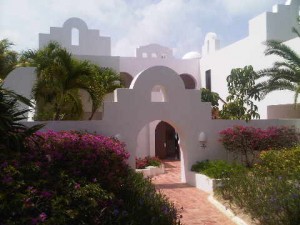 One of Cap Juluca's 18, all-white villas

Cap Juluca stretches over 179 acres of the Maunday’s Bay area of Anguilla and since May 4th this year it is once again owned by Charles Hickox and his wife Linda.  The only people who have made any money on it over the last couple of decades have been lawyers as one litigation case after another hit the courts.

The luxury resort was put into bankruptcy November 2011 and the group that had been managing it until then, led by one-time United Airlines marketing genius Adam Aron, who brought in other investors, including Manfredi Lefebvre, apparently lost a packet.   Someone discreetly paid for pots of paint to keep the 18 all-white villas in pristine condition; ten of those now belong to the Hickox pair, who want to buy some of the others.  Brilla Group, who own the lovely Art Deco Raleigh Hotel on Miami’s South Beach, own some – they were under-bidders in this month’s auction. 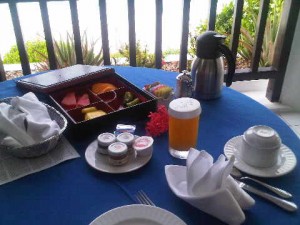 Complimentary breakfast, brought by Marilyn and set up on the terrace of 12-4

What is a typical day at Cap Juluca, a Leading hotel?  Breakfast in your villa room is free, as long as you do not want it before 0730 and you are happy with basic continental.  There is nothing wrong with the ingredients. A bento-box of fruit slices, juice, good wholewheat toast (if requested), coffee, American cream cheese, Austrian jams, New Zealand butters.

Incongruously, go to Blue Restaurant for the same and you have to pay for it (and there is no cream cheese, no fruit slices).  But this is a place for romance. Only the oddball would come here as a single, so there are other things to do besides hanging around waiting for breakfast. 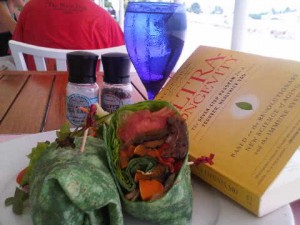 Lunch at Blue, a spinach tortilla wrap and a tome on longevity

During the morning there is the beach. And the beach. The good weekly guide suggests a bike tour, and water-borne excursions. There is a shared lap pool (some of the 71 rooms do have private pools), and the ocean is actually not too warm. Other alternatives are tennis, for the sauna-masochists, or croquet, or a walk through the undergrowth.

Lunch is back at Blue, called for its blue floor as well as the ocean a few yards away. They do a very good vegetable wrap in spinach tortilla: the couple at the next table had champagne (her) and Corona (him) and three courses, and she had her long hair down and he had his long hair up, in a topknot perched like a bird on the top of his head. 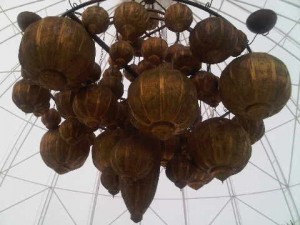 During the afternoon there is the beach, and the beach.  The sensible could always head for the two outstanding libraries, similar glass-walled rooms about ten by ten feet, with hundreds of desirable books and a total of three maxi-sized Valio computers with printers. There is also the spa, and the gym, which noone except yours truly seemed to care about finding. Tea, on the lobby terrace, goes on for hours, and is a popular nibbling place.  This lobby terrace is gorgeous.

A hemispherical white dome, about 30 feet across, soars overhead.  From it hangs a hundred-piece complicated metal chandelier.  It looks as Moroccan as the luxury resort’s villas but the wise young French GM, Bernard Sarne, brought it from Los Angeles  (he is wise through a few decades of learning how to get the best out of people, say in Bora Bora 15 years ago, and for a long time at luxury Orient-Express hotels and resorts, and now here, where the 400 employees obviously adore him). 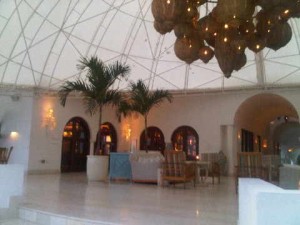 As evening falls, the lobby's exterior dome takes on a theatrical air

And so evening comes. A wedding party has taken over Blue for the evening (yes, this is a highly popular Caribbean wedding venue).  A couple sit in front of the big-screen television in the bar, called Maunday’s Club. Others head for the two adjacent restaurants, on tiled terraces cantilevered right out over the sea. Spice is a little more casual.

Its big-brother Pimms allows the French chef to show he can do basics well, say a flank steak with frites. A request for a glass of red wine brings just that, with no mention of what it is. As the gal steers her buggy back to the temporary home of villa 12, room 4, she realizes that only one person, a female concierge with a smile that would have conquered nations in the old days of empires, has called her by name.

At her last port-of-call (yes, in the USA, which does not usually top the polls of service worldwide) every single one of the employees knew her name, and used it, correctly. Can luxury and the Caribbean be compatible? Sarne says confidently, Yes.  He is closing Cap Juluca in August ‘for enhancements’ and when it re-opens this November, watch out.  Charles and Linda Hickox, with his help, are going to make this the best resort in the Caribbean.