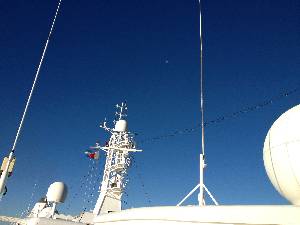 Silver Cloud presents what looks like sculptures at every turn.  Up on the ninth deck I look further up, and see shapes silhouetted against the azure sky.  I think back to luxury hotels that present similarly white outlines, with blue sky behind.

There is The Imperial, New Delhi, the Lutyens design that is so striking, right in the middle of town, and the Oetker Collection’s Hotel du Cap-Eden-Roc on the Riviera, and Red Carnation’s Twelve Apostles in Camps Bay, but where else are hotels all white?

The gal can think of masses of pink ones, from the Dorchester Collection’s Beverly Hills Hotel in Los Angeles to Orient-Express’ Mount Nelson, looking down over Cape Town. 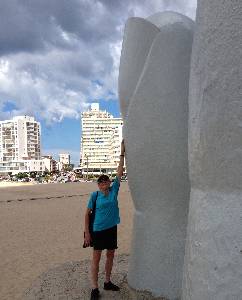 The mind wanders when cruising.  Most days you put into a different port, perhaps a different country, which sets the grey matter off on a theme.  Take sculptures, today.  At Punta del Este, also in Uruguay, La Mano dominates Playa Brava, popular with younger holiday makers.

A Chilean sculptor called Mario Irrazabul erected five giant concrete digits, four fingers and a thumb, which since they were finished in 1981 have been the favourite place to have your souvenir photograph taken. 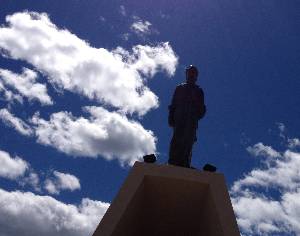 The following day we return to Argentina, to Puerto Madryn,  Here there is a comical lifesize white sculpture showing Don Quixote and Sancho Panza.

Of greater political note is the official 1965 memorial to the Welsh immigrants who had arrived as settlers a century before (their influence is still evident in such local delicacies as Welsh cake).

Puerto Madryn is rather a sad place.  Fishing is its main industry, but that sector is suffering, and the hotels are not full and neither are the beach cafes. 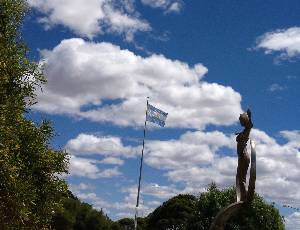 A metal sculpture next to an Argentinian flag

The greatest fun for the visitor is actually walking the long coast road, which switches from Av. G. Rawson to Bvd. Alte Guillermo Brown, and looking at the architecture that has sprung up, higgledy-piggledy with no sign of overall control.

There are lots more statues. One metal woman stands up proudly near the Argentinian flag but there is no identification label. The wind blows, as apparently it always does here. A few hours is more than enough, to take a walk and check the sculptures. 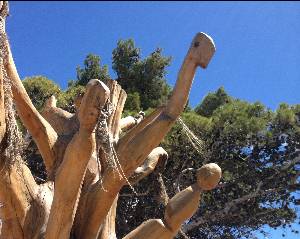 Dead trees, left where they are, are turned into sculptures…

Cleverly, once a tree dies it is turned, in situ, into a sculpture. The coastal road therefore becomes a blend of living trees, and carvings.  Most tourists come here to go to national parks, or scuba-diving.  In our few hours here I check the sights and look for hotels.

Nothing actually fits the luxury stereotype but the one I would suggest is Hotel Baia Nueva, right by the cruise pier.  It has a comfy main floor, with a good library, and a Swiss chalet-type bar with billiard table.

Upstairs, the big breakfast room is also chalet style. The 40 bedrooms are basic but you have free WiFi – and, with friendly staff, that is luxury for many. 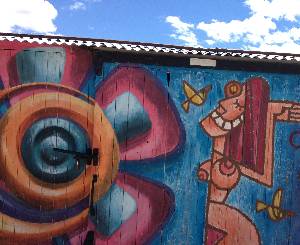 … and old wagons are imaginately painted

Before we walked along the grey concrete pier back to our temporary home, the floating hotel that is Silver Cloud, I noticed a bit of colour.  Someone had painted two old rail wagons.  For what? And why? The questions remained unanswered.

The 500-yard pier passed high over about 400 yards of sand, now that the tide was out.  At the end of the pier, by the ship, a dog barked furiously.

Just below the edge, on a ledge that would be submerged at high tide, seven sea lions, packed like sardines in a can, sunbathed.  When the tide came in again, they would be able to swim off.