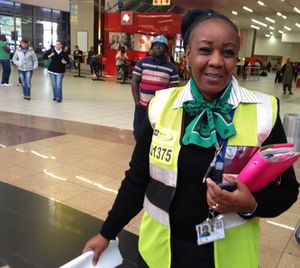 The first essential when travelling to Johannesburg is to check your arrival time. If it is early morning, say seven, be prepared to disembark at the same time as hundreds from New York, São Paulo, London, Singapore and Hong Kong. Yes, the gal knows what this means. Immigration can be hell. The answer? Stay in a luxury like that can provide plane-door VIP meeting. The Saxon, which many say is Africa’s top boutique hotel, can do just that (it is a Leading hotel, by the way, and GMs of other Leading hotels also rave about it). It also has a Leading spa, so obviously plenty of time is needed to immerse yourself in The Saxon. 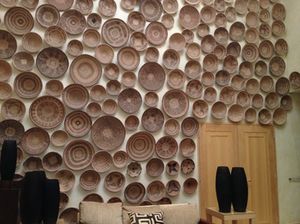 One of the walls of baskets

This is a hotel that makes you smile. It is so good, from beginning to end. Formerly one of the private homes of its owner, Douw Steyn – the comparethemarket.com insurance genius who owns Shambala and who paid £65 million for his London pad, in Belgrave Square – the hotel, opened 1999, is not only his passion, but also that of its long-time GM, George Cohen, and, it seems, everyone who works there. They all smile, so you do too. You smile as you enter, and look right, to an end wall decorated with baskets, about 300 of them in all. Go down the corridor to this wall and you pass a display of books by, and about, Nelson Mandela, who wrote Long Walk to Freedom Here. 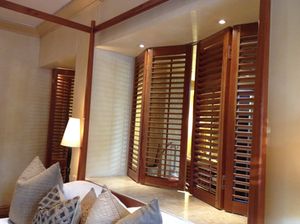 Behind the outline-only four-poster, shutters open to the bathtub

Stay in Mandela’s former suite, a duplex, or in one of the one-floor Presidential Suites, or in any of the 27 rooms and three villas. I was in 200, one of the Presidential Suites. Like the entire hotel, I had cream and beige colouring, lots of medium-coloured woods, including shutters at all the big windows (and between the bed and the freestanding bathtub behind), and assorted dark wood African sculptures and knickknacks but not too many of them. Designer is Stephen Falcke who has put ‘Africa’ into the whole hotel, but not too much. I have a hardback book on basketwork, to learn up about that basket-wall. 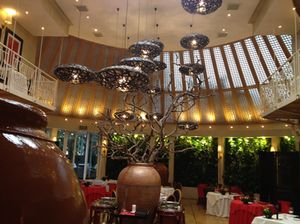 Since my last visit the rondavel-like restaurant has been ‘de- Africanised’. It now, as Qunu Grill, has three well-lit living wall panels, and some tables have scarlet table cloths. The manager is Italian, and it was really nice to have such outstanding dinner service from an all-male local team, in formal black. Yes, you can have a grill (steak), or a prepared dish (springbok), or, in my case, they let me design my own menu. And the wines were lovely – well, Qunu has a coveted 2013 Wine Spectator award and the head sommelier, Gareth Ferreira, was national champion in 2011. His list, therefore, runs the gamut, right up to 1996 Mouton Rothschild at R35,000. Although I see my old favourite a Marques de Riscal, I stick with a glass of DeWaal 2009 Pinotage, from Stellenbosch. 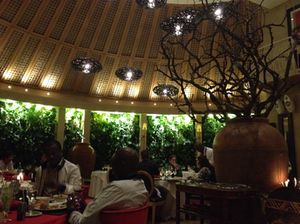 .. and, so romantically, by night

Here is a nice touch. A card – small, to be discreet – announces a five rand donation to Archbishop Tutu’s Street Smart, to help educate South Africa’s kids.   I am, incidentally, impressed by the education as I have seen it in 24 hours back in South Africa. Every one of the (smiling) team at this lovely hotel speaks impeccable English, better than in 99% of hotels in England, and seems immediately to understand, intuitively, what customers want. I am also, of course, forever impressed by the Archbishop. Some years ago I flew next to him, all the way from Johannesburg to Zurich, and he was incessant fun, and interestED. Last week he was on a Holland America Line cruise from Reunion to Durban, speaking, in return for a donation to Street Smart. The same cruise had entertainment from the Soweto String Quartet, apparently brilliant. 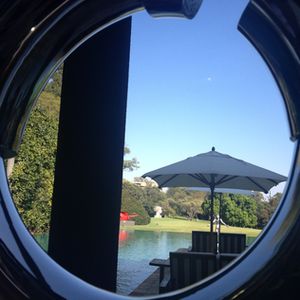 Look out, through a sculpture, across the front pool – at more sculpture

Back to this luxury hotel, which even after a few hours I love so much I want to stay forever (my friend Graham Cooke moves in for several months every English-winter, because he feels at home). The entertainment tonight, at dinner, is a talented pianist playing in the entrance to Qunu. I think he was playing too, at the weekly Sunday brunch earlier in the day – I heard him when I was inspecting the many lounges here, including the Library. Wow what a collection of hardback, covers-lost titles. Here is a row of Mark Twains (24), Six Centuries of English History (6) and Scottish History (4). There is a humidor. I look through to one of the sculptures in the grounds. Time for some art….