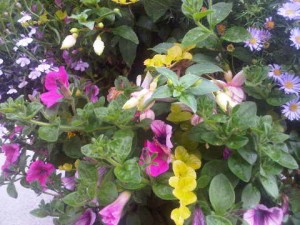 Alness, a wee town in north-east Scotland (just off the A9, with Inverness to the south and Invergordon to the north) has a whole wall of Beautiful plaques, one end wall on the outside of a pharmacy.

In 1999 it was the best floral town in the world – or the whirl—d, as the Scots would say.  It has won best floral displays in Scotland and best displays in the UK and even Europe so many times that this end wall is full.

The displays include hanging baskets from lamp posts, and standing displays on grass verges.  Wonderful, says the gal. 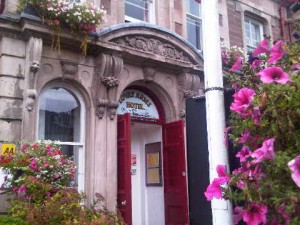 There are flowers outside Beauly's Lovat Arms Hotel, a favourite of top sports folk...

The beautiful expedition ship Silver Explorer, which seems to have everything else including beautiful people, food and wine aboard but no beautiful flowers, put into Invergordon before dawn.

This is the deepest harbour in UK, apparently, able to accommodate big naval vessels and certainly the Queen Elizabeth, which was here last month.  Today it is only one luxury ship, Silver Explorer, and a utilitarian Spanish fishing vessel.

The Spaniards somehow have EU fishing quotas that are higher than the Scots’, says our (Scottish) guide ruefully.  The coach heads on from Alness to Beauly, a deceptive one-street village.  It does have a few flower displays, but nothing like those in Alness. 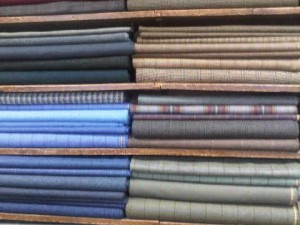 .. and visitors cross the road to buy traditional tweeds...

The Lovat Arms hotel gives a clue.  It is not a luxury hotel when compared with, say, the Bel-Air in Los Angeles or the Landmark Mandarin Oriental in Hong Kong.

But if you want the best Scottish hotel for hunting, shooting and fishing, or bird-watching or golf, this could well be it.

Head out from here, in a vanity-plate Land Rover, on an organised shoot.  If you have not got the gear, merely cross Beauly High Street to what must be the world’s best tweed shop, Campbell & Co (no website, use james@campbell42.fsnet.com). Oh wow.   Look at the bolts of cloth, here. 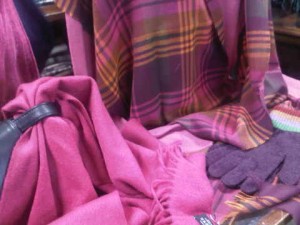 .. and made-up items, in stunning colours.

And there, on another wall, are dozens of kilts, different sizes, different tartans.  They have tweed caps with over-flaps that would do Sherlock Holmes proud.  Want a cashmere sweater?

The range of the palette is greater than Benetton’s t-shirts.  The owner is a dapper mature man in tartan tie and blue blazer.  He is assisted by a mature lady, a thin stick of a smiling woman in a Black Watch skirt and shawl.

This is fashion, Scottish style.  Buy here, to go stalking in the glens, narrow valleys, or the straths, wider valleys.   We wander round the ruins of Beauly Priory, where the Valliscaulian monks, who came from Val des Choux (cabbages) near Dijon had to stay silent, keep on site and wear hair-shirts next to their skin. 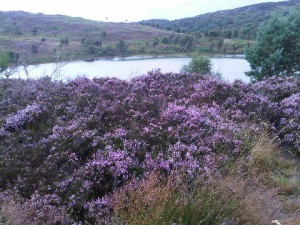 Fabulous heather by the roadside

We drive on, along the Firth, an inlet which comes from the Norse word for Fjord – wonder if Colin Firth knows this is where his name came from?  Grey seals bask in the shallows.

Out in deeper water is a deserted oil rig, which we are told that Mohammed Fayed, one-time owner of Harrods and still owner of The Ritz Paris, thought he could turn into a hotel.  Sounds like a good story.

I prefer to hear about the barley that is needed for the malt whiskies produced in this area.  If the local barley is not up to scratch, supplies are rushed in from the Netherlands or Poland. We switch from a golden barley landscape to the range of soft purples of the heather.

We drive around the city of Inverness, hear that Inver means ‘mouth of’, Ness is the river, leading from the famous Loch (lake). Inverness has a famous statue of the gal’s ancestor, Flora Macdonald, who hid Bonnie Prince Charlie and waited in vain for his return, and was later buried on the Isle of Skye. 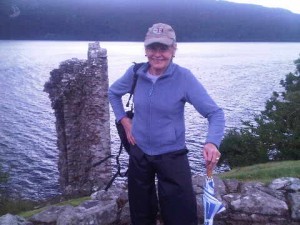 Dressed in heather shades, to look for the Loch Ness monster...

Silver Explorer has many unique qualities and one is that its land tours are all included in the price.  You do not have to think, gollee, is it worth it or not, or can I do my own thing better.  You do not, by the same token, dwell on the fact that perhaps today’s five-hour tour was a mite too long.

We were, after all, heading for the home of the Loch Ness monster.  Way back in the seventh century there were reports of an unidentified beast in the 700-foot deep loch, murky brown because of the peat the water has passed through.

Some say it could be a lone survivor of prehistoric plesiosaurs, air-breathing water dinosaurs (others say it is a Tully monster but that was only six inches long and it became extinct 280 million, MILLION, years ago). In 2003 the BBC used 600 separate sonar beams and satellite tracking and picked up no sign of any monster at all. 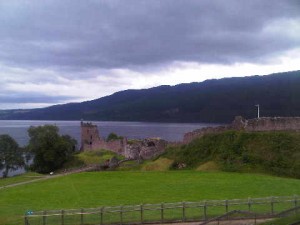 .. the ruins of Castle Urquhart, in front of Loch Ness...

Never mind. Urquhart Castle, ruined home of the Grant clan, is well worth a visit.  First, you enter a visitor centre (£7.40 a head, with long lines on some summer days), for an excellent eight-minute historical movie that ends with real curtains being drawn back to reveal the ruins as they are today.

Then you can wander around, climbing 41 tight stone spiral steps to the top of the tower that gave 270-degree views of Macdonald and other marauding clans of the past coming to kidnap cattle and seize gold. 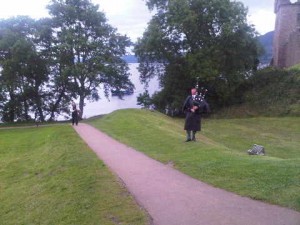 .. as we left a lone piper played

As we left the ruins, a lone piper played.   Just as the entire Silversea operation has a unique marketing tool in its ‘free laundry, forever, after you have spent a hundred nights onboard’, so Scotland has one USP that no other country can match.  Bring on a live bagpiper, the sound resonates far and wide and the resulting experience is magical. This is a luxury tour for memories. 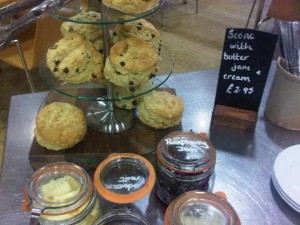 Of course there is Scottish food to try. Urquhart Castle’s café offers some of the biggest scones you can imagine, about the size of tennis balls.  Help yourself to a plain, or a fruit scone filled with sultanas, and take as much home-made raspberry jam preserve, and thick double cream, as you want, £2.95 a scone.

Much to some of the all-foreign visitors’ consternation, Scotland uses sterling, not the euro.  At least one would-be scone-devourer was caught out. Oh monster, we will be back again…