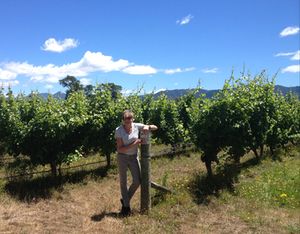 Even on the luxury cruise ship Silver Shadow the gal needs a break from time to time.   When she was moored in Picton Harbour, in New Zealand’s South Island, it seemed a good opportunity to visit that shrine of Sauvignon Blanc, Cloudy Bay. With a couple of dozen other passengers therefore, it was time to get off the ship, and into a waiting bus. The driver was Allan, a retired airline executive from Blenheim, capital of the Marlborough area, about 30 minutes’ drive from Picton.  Picton, by the way, is the port for the three-hour ferry crossing between the South and North islands. Marlborough has a total of 45,000 acres planted with vines, which accounts for 66 percent of all New Zealand’s wine production. 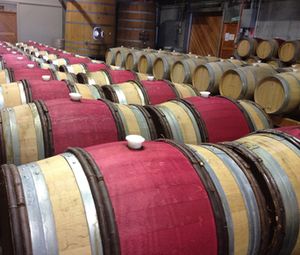 The half-hour drive from Picton to Cloudy Bay was fabulous, in hot sun.  We passed endless expanses of flat fields planted with vines that would eventually end up as wines with Marlborough on the label.  Cloudy Bay may be commercial but it certainly has brand recognition.  Started by Australia’s Cape Mentelle winery, it is now 100 percent owned by LVMH, which helps with distribution. At first its export market was dominated by Harrods in London. Now it sells to over 80 countries.  Seventy percent of the 200,000 cases it produces a year are Sauvignon Blanc, though they are expanding their Pinot Noir. 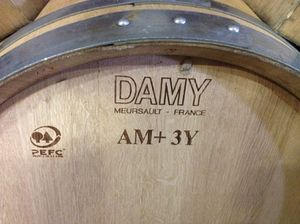 Their 700 acres are not sufficient to produce enough grapes so roughly 50 percent are bought in from known growers.  Today, we gathered around a long table set with lots of sets of six glasses.   First we tasted Cloudy Bay’s Pelorus sparkling, a very dry bubbly that is Chardonnay and Pinot Noir.  We moved on to the standard Cloudy Bay Sauvignon Blanc, 2013, harvested at night by hand-picking, and fermented in locally-made temperature-controlled steel tanks. Next came a Cloudy Bay Te Koko Sauvignon Blanc 2010, a much darker and richer wine as it is stored in French-oak barrels for malolactic fermention. 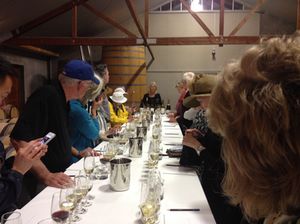 Our fourth wine was Cloudy Bay Chardonnay 2011, from low-yield Mendoza clones cropped very low, stored partly in steel and partly in oak barrels.  After this came an extremely pleasant Cloudy Bay Pinot Gris 2012, a wine that would go so well with food, and the final tasting was Cloudy Bay Pinot Noir 2011, hand-picked from low-cropped vines on aged alluvial gravels with some clay – the grapes are crushed and de-stemmed by hand, soaked to extract colour and tannin and matured in big French oak barriques, with the final wine blended from over 40 different batches. 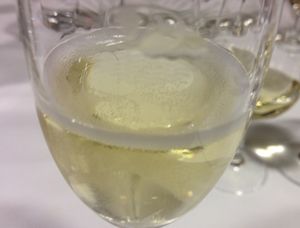 Cloudy Bay’s Pelorus is not exported

We did another winery too, Wither Hills, started by a former apple farmer, John Marris, and his son Brent and now part of the Japanese-owned Lion Nathan conglomerate. The difference is that whereas Cloudy Bay has grown and grown, with one shed having an extension and so on, Wither Hills was built to a California design, and could have been any of those big name wineries, from Hess Collection to Robert Mondavi in the Alexander, Napa and Sonoma Valleys.  We tasted some more wines (and some drank every drop) and looked down at the lovely Wither Hills restaurant, inside-out and everything from Marlborough-smoked hot salmon with vegetables to chips, to go with, say, a glass of Wither Hills Single Vineyards Rarangi Sauvignon Blanc 2012. 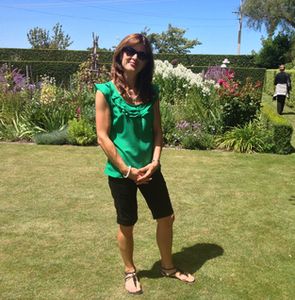 The half-day tour also took in the most amazing modern garden I have seen outside England, Upton Oaks, on Blenheim’s Old Renwick Road.  In 1985 Dave Monahan, a furniture designer, and his equally creative wife Sue bought an empty three-acre plot of volcanic-soil land and moved a 1911 corrugated-iron-roof homestead there. Jump forward and the garden is an endless treasury of small areas, divided by five-foot hedges, each more romantic than the others.  Here there are box-hedges parterres of different colours, here a dovecot with white birds surrounded by green bushes, here low-set fruitful orange and lemon bushes form a hedge.  This is a popular place for weddings, said Sue Monahan as she showed us around – she does the entire garden by herself, incidentally.  And then it was time to head back to our luxury hotel, sorry, luxury ship.