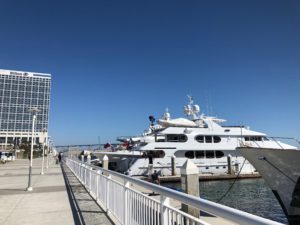 Looking along the Waterfront to the Hilton

The gal had not been in San Diego for seven years and it seems to have exploded, in the nicest way.  It had its iconic U.S. Grant hotel, built in 1910 by Ulysses S. Grant Jr in honour of his father, the nation’s 18th President.  It also had a few Gaslamp-area boutiques, if you could stretch imagination to call them that.  A massive shiny-glass InterContinental appeared on the waterfront but its owner fell out with the management company over carpets so he switched to Marriott and built another tower. A convention centre popped up and so did more hotels, all around. The Waterfront Hilton is about the least attractive aesthetically.  It is a shoe-box of a hotel, with luxury not applicable, at least in architectural terms. 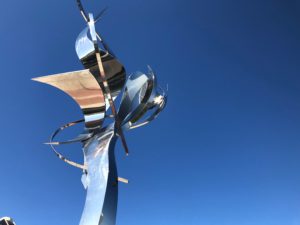 Within a couple of blocks of the convention centre is not only the lovely Pendry but you have a Hard Rock, an Omni, another Marriott and anything else you can think of.  Stay at any of these and you have access to the waterfront, which really is gorgeous. I climbed up the Convention Center’s steps to get a better image of one of the statues.  I was one of the few people walking, by the way.  As the photo above shows, swipe-a-bike has arrived with a vengeance (wonder what D. Trump would think of this Chinese invasion?). There are also bright green swipe-an-electric-scooter, on which tourists and locals whiz dangerously around town. 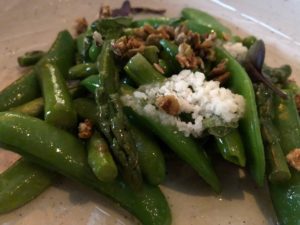 Dining here is pretty sensational too. Four of us went to Juniper & Ivy, where the chef, Richard Blais, has exported himself from Virginia – ‘best food I have had since I moved to the States 2.5 years ago’ says one satisfied reviewer on Yelp.  It is a barn of a place with, as is the norm in town, seating at different heights. Food is supposed to be sharing but we went solo, in my case two starters, an English pea salad with burrata followed by pork belly, which turned our to be two bite-sized cubes. It was obviously a clever move of Juniper Hospitality’s Michael Rosen, and Atlanta-based Concentrics Restaurants, to put this restaurant together in 2014. 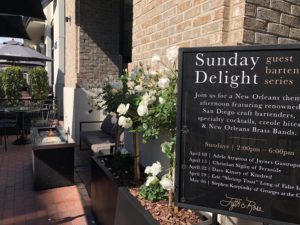 Seven years ago, Horton Plaza was as vital a San Diego destination as  city’s famous zoo but now the Plaza is Westfield, it is 40 years old and apparently has too many vacant stores, so I gave that a miss this time. I walked extensively, fascinated by the vibrancy of the city in general. And then I got back home to the Pendry. To show what a friendly luxury hotel this is, as I finally left several of the bellmen said goodbye to me by name and afterwards I got a management email saying ‘great to see you and thank you for taking the time …until next time, #CHAMPENDRY Wishes and Caviar Dreams’. NOW SEE A WATERFRONT VIDEO