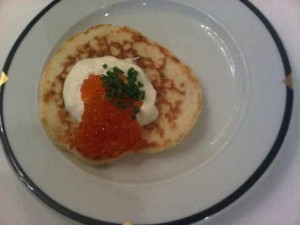 Think of Russian food and you may think of blinis, thin pancakes topped with sour cream (smetana) and salmon-roe caviar. The gal loves them.  The typical blini, by the way, is thicker than a French crêpe or a blintz because it, the Russian version, has a leavening agent.  Apparently, being round, they were considered by early Slavs as a symbol of the sun and the Orthodox church sees them as honouring a new sun. 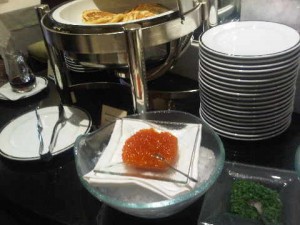 Make your own – the ingredients are on the breakfast buffet

At the luxury Hotel Baltschug Kempinski in Moscow, a Leading Hotel, you can make your own, at breakfast.  The buffet has all the ingredients.  The buffet, of course, has masses of different dairy items, from smetana and a variety of yoghurts and curds through to cheeses, and butter comes salted or unsalted, always a sign of style. And the breads include fabulous traditional Russian black bread, a sign of healthy living – and tradition. 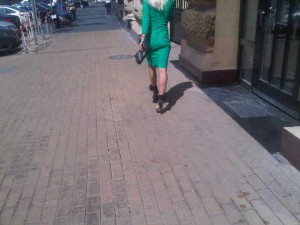 Meticulously clean streets and pavements, and high-high heels, this is central Moscow 2012

Sometimes, in the capital of the Russian Federation, also known as Russia, one is not sure how much is tradition.  See this immaculately-clean street.  Having been visiting beautiful Russia since Soviet times, I do not remember it always so clean.

Then hordes of little-old-grannies (like the marvellous singers who came second in the Eurovision Song Contest in Baku last Saturday) appeared, all wrapped up to make’em even more shapeless.  They had witches’ brooms of sticks tied in a bundle, and they swept the streets.

This little-old-grannies are now replaced by an all-female workforce that is younger, chicer and, one feels, just as knowledgeable about make-up and fashion as their sisters pounding those clean streets and pavements in high-high heels.  But I have already mentioned those heels. How do they manage them, sometimes with baby buggies or needing to run fast across cobbles? 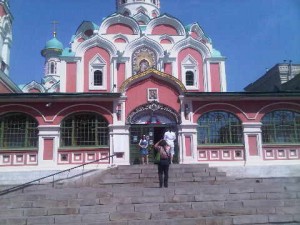 Even young people, especially women, break off from their work, their walking and talking, to go into the many churches and cathedrals around the city.  Women cover your heads, please.  This particular church, right at the north tip of Red Square, is a reconstruction of the Kazan cathedral destroyed in the Stalin era. 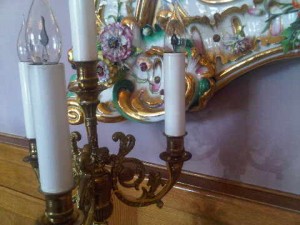 Similarly, you wonder if The National’s porcelain mirror frame is old or new

The National, a Luxury Collection hotel just north of Red Square (adjacent to Ritz-Carlton Hotel Moscow) at first sight looked closed.  There are mammoth cranes enabling workers to clean the uppermost of its six floors, and the pavement is blocked off.

I was about to walk away when I saw a doorman coming out of the main door on Mokhovaya Street.  Now if there is a door and a doorman he must be manning something… sure enough, inside the hotel, displaying some signs of its 109 years, is still operating.

Are some of its treasures, like a rare porcelain-surround mirror in the main lobby, old or new?  The hotel is owned by the BIN Group, which has just bought InterContinental Moscow Tverskaya and the future-Mandarin Oriental Moscow.  What will they do with this one? 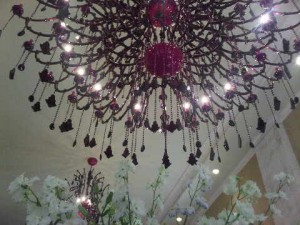 The three chandeliers in the two-floor lobby of Baltschug Kempinski are very definitely new.  They have been brought from Slovakia and put up only in the last few weeks, according to the whim of the hotel’s designer, Zuzana Cambelova, who apparently has done the Kempinskis in Bratislava and High Tatras.

Cambelova has turned the swirling staircase, from floor to upper-level, from anti-clockwise to clockwise, and opened up the main floor considerably (that upper floor, which had a restaurant, is now all meetings and money). 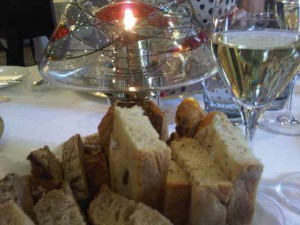 Whimsicial table light – behind the bread – in the hotel’s Grill

The all-purpose, all-day Grill restaurant is now ground floor, flowing outdoors to the sidewalk in summer.   At breakfast it has that gloriously buffet and can cater for crowds of top businessmen (and no, they are not all German, though many seem to be as one can deduce from those working out in the basement gym and enjoying the sizeable saunas and pool).

At lunch, who knows – I was out. At dinner, with whimsical table lamps and lots of fine linen, and time to notice the glorious end wall decorated with dozens of mirrors – framed in gold rather than porcelain – the room takes on a romantic air.  Time for a glass of Billecart-Salmon, girl, and a glass of Tenuta Terre Neve Etna Rosso 2009 chosen by Moscow’s leading female sommelier, the head wine honcho here.

The hotel has a Wine Connoisseurs’ Club: every dinner starts with a theme, and club members bring an appropriate bottle, which is lots of fun for everyone.  According to Wine Economist the current wine consumption still remains a little stained by its association with alcohol (the annual per capita consumption of which is seven litres a year). 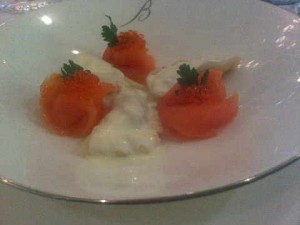 Time too for the last supper, Moscow at least. Time to try piroshki – known in Poland as pierogi, in Ukraine as vareneki, or varenyky, but, wherever, filled dough pockets.   Here, Hungarian chef Gergo Gullner fills his with potato.

Jovial host Gerhard Mitrovits (who has refused my suggestion to have the menu’s wienerschnitzel as ‘nothing is as good as the ones back home’ in his native Austria) insists on smetana and smoked salmon, and recounts with glee how he learned all the technicalities for his German hunting licence in one week straight.  I said goodbye, and headed to bed, for an 0300 wakeup call. What a lovely life… 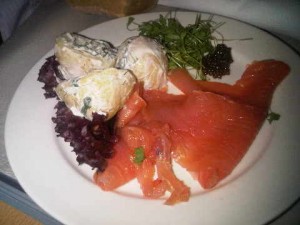 More salmon, with oscietra caviar, potatoes and salad, on the British Airways’ 0550 flight to London

British Airways took off from Domodedovo airport at 0550 sharp. Believe it or not, once I had got over the early start, this was luxury travel. The hotel’s driver was charming, the BMW purred quickly to the airport, there were no lines.

On board, front-of-plane was a proper cabin, with flat-bed seats for a proper sleep (Russia has now switched from ‘Europe short haul’ to ‘long haul’ status). Breakfast came – and it included yet more salmon, and this time the accompanying caviar was not salmon roe but Oscietra.

Going out with style, gal.  If this is what the airline’s new-look food, that I tasted a month ago at its London pop-up restaurant, will be like, well, jolly good. Now, where will we be tomorrow?