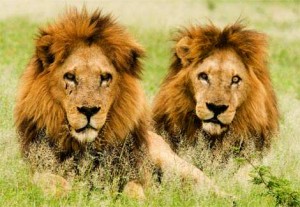 Who's the king of the castle then?

When it comes to cruising, for savvy luxury travel pay for the best, such as Silversea.  Similarly, when it comes to safaris, again, choose the best.  In Botswana’s amazing Okavango Delta, for instance, opt for Orient-Express, which has three incredible luxury lodges, Eagle Island, Khwai River Lodge and Savute.

Each offers a unique overall experience – at Eagle Island on Xaxaba, you have floodplains, islands, channels and riverine vegetation, and activities include canoe rides, motorboat and sunset cruises, scenic helicopter excursions, fishing, bird-watching walks as well as game treks.

All three have similar luxury tents.  Look at overall value and experience and you get a great return with Orient-Express’ all-inclusive deals.  The gal recommends one add-on.  Pay a little more to have your own private trek vehicle. 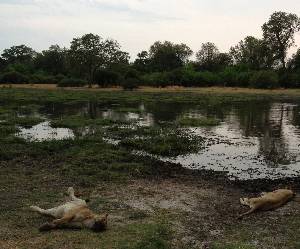 This means that you, and your guide – who may well also be your driver – can do whatever you want.  You are not dependent on others sharing the vehicle.  Even travelling with ‘friends’ can be jolly annoying.

Germans are on time. Spanish and South Americans are not. Having one cameraholic with you who insists on staying still for two hours just to photograph one distant little bird is, well, stressful.  No, go by yourselves.

And, as in a museum, concentrate on specific topics rather than try to see the entire gallery.   We set off with Khwai River Lodge guide Ness, in a diesel Land Cruiser.  What would we like to see today?  Not elephants, been there, done that. 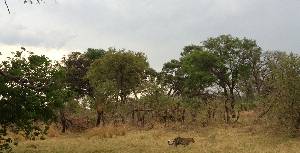 Leopard cub, about a year old

First request today is lion.  We come across a pride, nine strong – three adult females, two male year-old babies and four young males.  This pride, says Ness, is known as the crazy ones.  Most lion rest during the hot middle of the day.  This pride just keeps on going.

I think of Noel Coward’s 1931 song, “Mad dogs and Englishmen go out in the midday sun” which, it is said, he wrote while being driven in Vietnam, from Hanoi to Ho Chi Minh City, then Saigon.  Here the ‘mad dogs’ are not exactly exerting themselves.

One female lies sleeping by the water’s edge, with two of the babies.   Two of the young males are not far away.  One is limping badly.  Ness says only if a predator animal is seriously injured would he alert the park rangers. 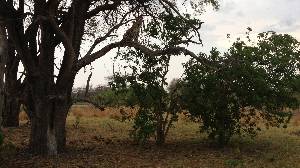 Leopard mother up in a tree

I learn more.  Lion roars are very loud, and end in a series of short bellows.  They can go up to a week without eating but when they do sit down to a meal, gosh do they gorge.  Thanks to stomach walls that expand as if elastic, a full-grown male can devour up to 200 kg (440 lbs)  –  a lioness can only manage a more restrained maximum of 150 kg (330 lbs).

Ness says, looking at this pride, that they have probably eaten recently.  Their stomachs seem slightly distended, and there is a noticeable sniff in the air.  I ask what would happen if I get down out of the Land Cruiser.  As long as I did not start running, I might be all right.  Start running and two front paws would grab me down by the shoulder, and I would be suffocated by squeezing the throat.

They never start eating anything, incidentally, without turning it face down.  They do not want to look at eyes when tasting.  And they eat the fleshiest, most tender parts of an animal first. 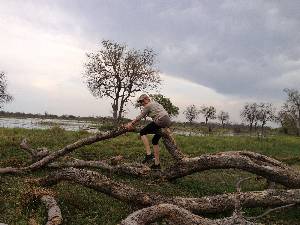 Want to practise being a leopard?

Lion have very good eyesight, especially at night.  They have good hearing, and live to about 20 years (they are fertile at four years old).  Here, by the water’s edge, the crazy ones are relaxing oblivious to the constant activity behind them of about 20 hippos, surfacing every now and again as they walk the lake’s base – hippos, says Ness, live up to 40 years.  Leopard live up to 20 years.

I am memorizing all this as we jerk our way through yet more different terrain.  We come to a tree and, boy, there is a mama leopard high up in its branches.  She is lying sprawled out, looking down some 30 feet to the ground where her year-old cub is playing.  She is weaning him.

She will probably maim a small animal, and then leave her cub actually to kill.  She may well go off and leave cub for up to three days, to see if he can manage by himself.  If she has to call him, her rasping cough sounds like a saw cutting through wood. 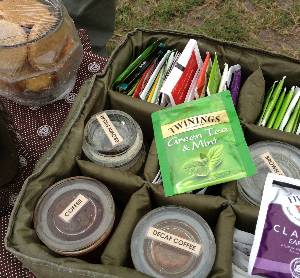 Mid-safari break for coffee or tea (in the afternoon, your choice of sundowner)

We continue on – typically each trek, we travel in a range of about 20 miles from Khwai River Lodge.  Although all the vehicles are in radio contact with each other, sharing animal sightings, there is no GPS, but the drivers never get lost.

We pass several fever trees, the ones that elephants avoid. Ness says traditionally the local people, the Bayie clan, used to pound its bark to make into a powder to sprinkle on the water: this got into fish gills, suffocated them and the bodies rose to the surface.  Easy but indiscriminate fishing.

It is time for our coffee break.  In a safe place, far away from predators, Ness sets up a folding table, puts a cloth on it and, using a flask of boiling water, actually produces excellent coffee in a stainless plunger. There are lots of home-made cookies (for the second, late afternoon, daily trek, your choice of sundowner appears). 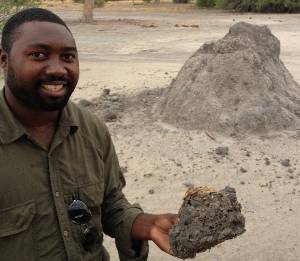 There are eagles and egrets, and a range of antelope (including a few-hours unsteady impala who would have been on his feet within 20 minutes of being ‘dropped’, born), but the most prolific ‘animals’ we do not actually see.  Under each termite mountain there could be two million termites living – the same population as the whole of Botswana!

After at least 15 years’ work the mountains, formed of termites’ excrement bound with saliva, are around six feet tall, and still growing.  The workers underneath are busily reconstituting the fibrous plant matter, probably gained through elephant turds, that has been brought into them via underground channels.

The workers feed their king and queen, who have separate chambers but get together for daily sex. The queen, who looks like a bloated sausage, is the size of a human thumb: her king is half her size.  Princes and princesses in waiting, all of whom have wings (workers do not) are also fed.

When king or queen is about to die, at the age of about 50, workers gather around and eat the dying body, and a prince or princess takes over…  How to recognize a termite from an ant? Termites are milky white.  Ants are black or brown.  Amazing what one adds to one’s luxury lifestyle knowledge