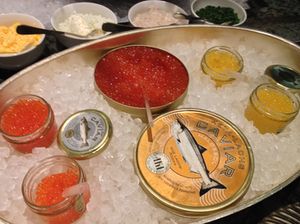 The Adlon’s buffet has all Russian essentials

And so, the final day of ‘Berlin 2014’, with nearly 52 weeks until it, IHIF followed by ITB, starts all over again. Next year, as last year and this, the gal will be back at the Adlon Kempinski, hopefully in room 518 and with the gym open 24/7 rather than from five o’clock – and the same lovely pool attendant, with her long blonde hair, and the young blond breakfast server who calls you by name even though he only sees you once a year …  OH the breakfast.  One morning I am with a Russian friend and his take, from the copious buffet, is Moët and a full Russian spread, with salmon caviar, blinis and sour cream. 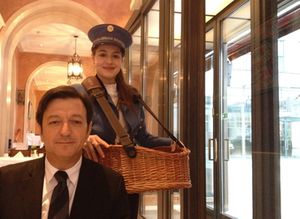 For others, western European is what they want.  Xavier Destribats, SVP Operations for the entire Kempinski group, shows that a good boy from Bordeaux is incredibly tempted by a first-class croissant.  I love the fact that as well as open bowls of plain and flavoured yoghurts, the buffet also has a full range of Ferme des Peuplier pots. The breads are as you expect from the best German institution, including low-carb and gluten-free, and big warm laugenbroten or laugenwecken, pretzel rolls.  The coffee comes in little silver pots and of course it is good (if it were not, people would simply head for the Starbucks across Unter der Linden avenue). 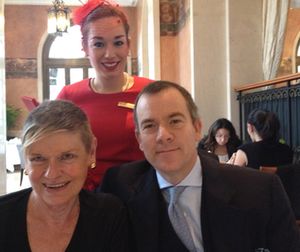 Duncan O’Rourke and Lady In Red

I am also with Duncan O’Rourke, Kempinski’s COO, and he tells me how 75 of the hotels’ General Managers held a cook-and-tell a couple of weeks ago, in Munich.  He and his colleague and boss Reto Wittwer, who had not eaten a thing at the party he co-hosted here in Berlin, last night, had to taste all those 75 offerings…  I cannot remember what Duncan O’Rourke ate here, for his final IHIF/ITB breakfast, but it was something to do with eggs as it was brought by the top Lady In Red who, like her colleagues, has been working flat out during this week.  This is where the top people stay: this morning I was in the gym next to Emirates Airline’s key person Thierry Antinori – and at a breakfast table next to ours is the all-powerful Akbar al-Baker of Qatar Airways. 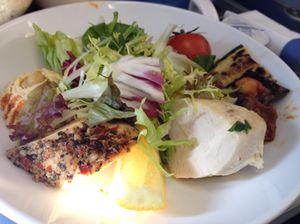 Fly away, for lunch in the air

And talking of airlines, it is time to leave this luxury hotel, to sink back into one of its BMW limousines and glide away to Berlin’s Tegel airport (OK, do NOT mention it, Berliners are highly sensitive, and the much-vaunted forthcoming Brandenburg Airport, where costs have already soared from €2.5 billion to €4.3 billion, will not now open until at least March 2016…). Tegel, meanwhile, is small and compact. The British Airways A319 was of course packed, but they served a very satisfactory cold collation, and I was at last on my way home.