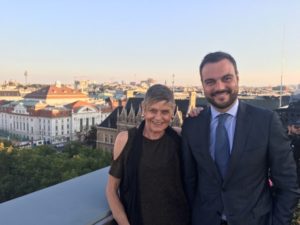 Trying to find differentiation among Vienna’s luxury hotels requires imagination as all are at top level when it comes to world-class service. Visitors from across the Atlantic will be amazed that everything here works, professionally and with a smile, and never once do you see a hand out, or eyebrows raised, waiting for a gratuity. And there are constant surprises. The Ritz-Carlton Vienna has a running concierge, Philipp Voigt. See him above after escorting his ultimate boss, Marriott’s one and only Arne Sorenson, on a tour of the old city (Philipp Voigt, a Berliner, says it actually helps not being a Vienna native as he is more curious about the minute details of this gorgeous city). No, the gal did not go running with the concierge, this visit. Another surprise here was to catch up with GM Christian Zandonella, recently arrived from Bahrain. 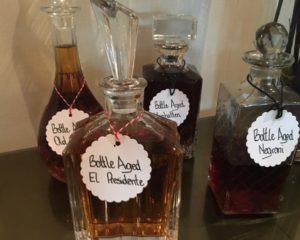 We went up to Atmosphere, the eighth floor rooftop lounge, and wow, every seat was taken, by locals. Regulars know that this is the best summer evening cocktail venue imaginable, with 360-degree views of the city. Next it was 27 steps down to the Club Lounge, on the seventh floor. He takes it very seriously, does Christian Zandonella, and he deserves a medal for the number of spirits bottles displayed for guests to savour at cocktail hour, 42 different types, total (sorry, I forgot to count the number of gins). Add to this the eight wines in the enotheque machine, and the bubbly, and four decanters of home-made cocktails, include Negroni, concocted by the hotel’s top mixologist. The food was pretty good, too. 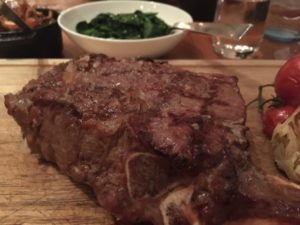 But, oh what anOTHER surprise. Last time I dined in DISTRIKT it was empty and uninspiring. The local celebrity chef had seen better days. Now that guy is gone and the hotel is totally in charge. Attractive blackboards, with descriptions of meat cuts, have been put up on some walls, and every table is taken, inside and out, on the Kärntner Ring terrace. It was difficult to choose from the A3-sized menu, on a heavy wood backing. Weight-lifting this worked up yet more energy for the 600g bone-in ribeye from Upper Austria that I eventually chose – it came on another heavy wood board, with two halves of garlic, and tomatoes on the vine, which added to the tomato salad I had just eaten, showcasing some of the 127 tomato varieties said to exist in Austria. I was offered a box with a choice of over a dozen steak knives, and chose a new-look Laguiole, without that iconic French brand’s signature bee logo. 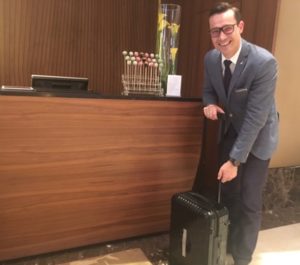 But surprises were not finished. As always on arrival I declined help in taking my beloved Porsche Design Rimowa wheelie as the handle was a bit wonky. This handle has been working nonstop since it was replaced while I was at Excelsior Hotel Ernst in Cologne on November 3rd, 2010 (the Rimowa factory is nearby). Well, here at Ritz-Carlton Vienna the charmingly helpful Sebastian Naumann said well WE can get it replaced; I will take it personally, the Rimowa shop is only ten minutes’ away. Two hours later I had a new handle, with compliments of Rimowa, and a quote from them in case I would also like all the scratches on the bodywork cleaned up. How is that for service? AND Sebastian Naumann brought two chocolates, as well. It is memories like this that differentiate luxury hotels. NOW TOUR ROOM 535, BELOW