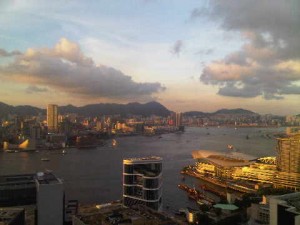 The highest view from a Hong Kong hotel is from the top of the 118-floor Ritz-Carlton Hong Kong, on the mainland side of Victoria Harbour.

One of highest views on the Hong Kong Island side of the harbour is from upper floors of any of the three main Pacific Place hotels.  Take the view from 4801, one of the 01-series end rooms of the 56-floor lozenge-shaped Island Shangri-La.  Somehow a view with water helps inner calmness, says the gal. 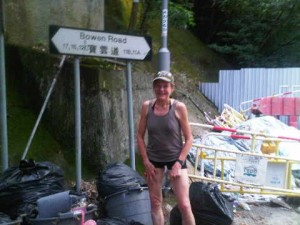 This hotel, like its fellows ‘up here’, is a great place to start a dawn run around part of  Bowen Road.  Out of the main door, turn left past the J Seward Johnson sculptures, immediately right up the gruelling-diagonal Justice Drive, through a track, up some steps, turn left, hard right up another near-diagonal, Bowen Path, and then you find yourself on the mercifully-flat Bowen Road.

You pass or are passed by serious runners, and groups of trainer-shoed denizens of yesterday, some carrying umbrellas in case of rain, sun or both. Island Shangri-La’s detailed jogging map gives up to two hours for the whole Bowen Road, getting there by Peak Tram rather than Shanks’s pony.

Question, who was Shank? Sorry, the term apparently comes from the lower bone between knee and ankle and it is thought to have originated in the 18th century – see Robert Fergusson’s Poems on Various Subjects, 1774: ‘He took shanks-naig, but fient may care’.  In the USA, perhaps inspired by feminism, one finds Shank’s mare. 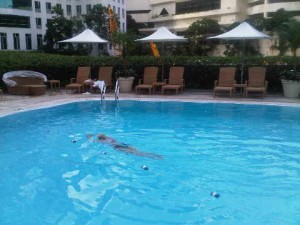 It is while exercising that the brain cogitates, plans business strategies and quizzes you on what is what. Back down in the hotel’s lovely outdoor pool, I concentrate number of lengths to go, and how to avoid others lapping furiously.

Strategy planning is forgotten, when swimming.  The lifeguards are in English Patient gear, beige shirts and darker somewhat-baggy above-knee shorts that match the beige towels. A lifeguard brings a towel as a swimmer emerges. 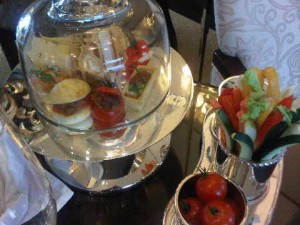 A few snacks await in the room

Time for breakfast.  Petrus, on the 56th floor, is elegantly quiet.  We talk hair, namely the chic styles, often diagonally upwards, of sharp young males.  We talk chandeliers, of which apparently there are no fewer than 770 in the hotel.

Well, each of the 565 rooms has at least one.  4801 has two.  Actually 4801 has everyone anyone can want, including a proper office kit with the scissors that should be compulsory in every hotel post-911, when hand baggage rules became so extreme.  4801 also has that view. 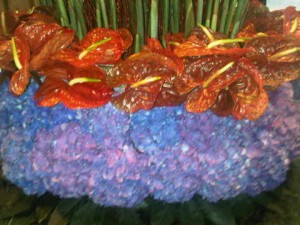 Walking back along the open-atrium corridor to the elevator block is another view, through to just a section of the world’s largest Chinese silk painting, The Great Motherhood of China, a 460ft-tall work (56 feet wide) that soars up through 16 floors of the open atrium that rises from an indoor garden. Each one of the gallery parapets on the floors above has real greenery, which requires watering. 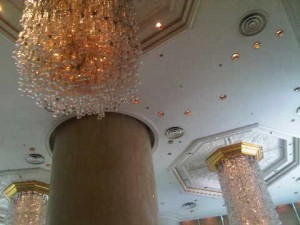 Some of the 770 chandeliers in this place

You wait for the elevators, and chandeliers hang overhead. Some of the 770 chandeliers have little shades – and yes, a shaded-affair is just as much a chandelier as an ormolu bauble or a Murano.

Back down in the main lobby, enormous chandeliers fall as stalactites.  In all of the chandeliers spied, however, there were a myriad of styles but nothing quite like the Prague-programmed light-changing items in Abu Dhabi. 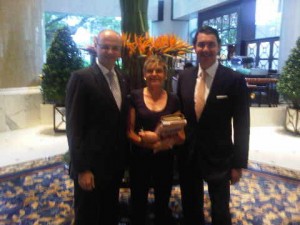 From the lobby, you can take escalators or glass-bubble elevators directly down to Pacific Place and its four floors of fabulous retail.  You can also go out to your limousine, waiting of course.

But as you go you invariably run into someone you know.  This lobby is one of Hong Kong’s meeting places of the rich or famous and the great and good, say SHKP hotels’ boss Ricco DeBlank and this luxury hotel’s GM and manager of an area that confusingly includes both Taipei and Tokyo, Wolfgang Krueger (whose German parents, up near the Danish border, wanted him to become a Banker and Really Rich…).

At that point, it was time to sweep outside, with at least half a dozen smiling and waving farewells – where to, driver?