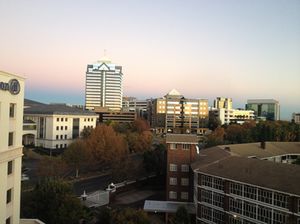 Back in Johannesburg – and look at the morning view from room 603 of Hilton Johannesburg, in the Sandton area of town as the sun lights up office buildings around. There is so much building going on, filling in gaps between luxury hotels. The gal’s favourite French restaurant, Le Canard, closed end of last year when its owner, Freda Appelbaum, sold to Chinese developers (but never worry, Freda Appelbaum is shortly to open a day-long, but no evening, deli – well, she is only 82 so why not?). 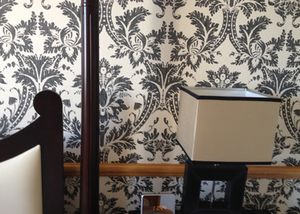 Room 603 is, in fact, the hotel’s Presidential Suite and I long to know who stayed here during Mandela’s funeral last December. There were so many Heads of State they must have been falling over each other. Stories abound. Is it true that former Malaysian Prime Minister Mahathir came back to the hotel that he had launched in 1995? Actually I thought ships were launched, not hotels, but there was a slight hiccup here. In 1997 Prince Charles came to open the hotel, officially, so Mahathir’s plaque must have been changed to ‘launch’. Is it really true that HM King Willem-Alexander of The Netherlands arrived in a minibus that was initially refused entry into the high-security courtyard? 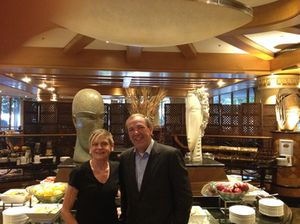 Of course His Majesty had to stay here, as the boss of this 326-room hotel, and Hilton’s man in the whole of Sub-Saharan Africa plus the Indian Ocean, is, as his name – Jan van der Putten – instantly suggests, Dutch. The Dutch communities around the world are especially close-knit (I think of hoteliers Ricco de Blank, who somehow has time regularly to report back to Dutch radio happenings in Hong Kong and Mainland China, and, in Singapore, Pan Pacific’s Hans Heijligers, about the last person officially to greet Princess Beatrix while she was still Queen). 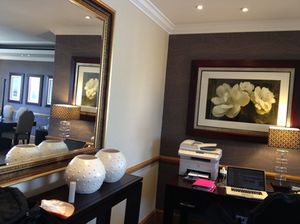 Plenty of space for working…

Anyway, whoever stayed in 603 during the Mandela event was jolly lucky as he had masses of space, and that morning light across Rivonia Road. The suite is only a minute from the club lounge, which saves time, although actually I went down to the breakfast buffet. Jan van der Putten called by, for some more coffee – I think the Dutch drink as much coffee as the Finns. We talked about his Abuja hotel, which is hosting the World Economic Forum Africa, May 7-9, 2014 – Its theme is Forging Inclusive Growth, Creating Jobs. Oh boy, the little Davos concept that Klaus Schwab, then Professor of Business Policy at the University of Geneva, created in 1971 has grown into a monster. WEF enthusiasts have to pack up on May 9th and rush to the Philippines, for the East Asia WEF, May 21-23, 2014. 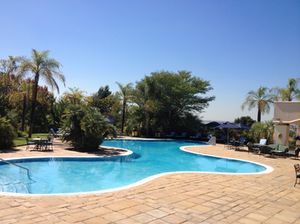 Delta crews love Hilton Johannesburg, especially after their 16-hour flight from Atlanta. They, and Swissair crews who also overnight here, have their own crew room. Somehow, seeing the cuddly Delta crew members getting ready for their next flight, I do not think many of them are gym regulars – I certainly did not see any obvious flight crew when I was in the gym, but then I had it all to myself as it was mid-morning. There is a most attractive outdoor pool that the crews must enjoy when it is warmer. Some gardeners pass by, and greet me. Every single one of the 400 or so people working here must be employed for smiles as well as attitude and skills. 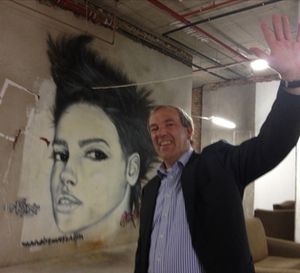 ..and watching the World Cup!

Right now some of the team members are busily decorating a cavernous indoor space that is being turned into the ultimate luxury hotel World Cup bar (it has a street entrance, fortunately, so it will not disturb the main hotel). As Jan van der Putten says, just wait for June 12th!