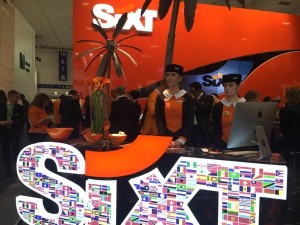 Oh there were so many events going on last week in Berlin, first at the International Hotel Investment Conference IHIF and then at ITB. There, at ITB, Sixt car rental was much in evidence – it now seems to take up at least a third of the massive Hall 9, the one that used to be hotels-only but which now sees only the biggies, AccorHotels, Hyatt, Hilton, IHG, Marriott and Starwood, and Oberoi, One&Only and Taj. The rest of the luxury hotel world has realised that ITB is simply too enormous, and too all-encompassing. Few of the 1,000 qualified buyers want top-quality products, and even a small percentage of the 50,000 private visitors and the 120,000 trade visitors is not enough to justify the spend required to take an ITB stand. says the gal. 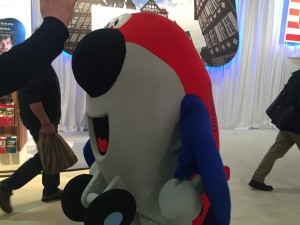 Person dressed as a plane

Hotels in all were 18.3% of exhibitors in 2015, down from 20.4% the previous year – and believe it or not, despite modern communications and German efficiency no figures are yet available for 2016. Never mind, there was a lot to see there. At this year’s show, the usual characters were dressed up in national dress, or trying to look like planes. 22.6% of exhibitors last year were German, down from 29.9% in 2014, which puts the international participation up considerably. The Maldives was featured destination in 2016 and their promotion was everywhere. Next year – when ITB runs from Wednesday March 8 to Sunday March 12, 2017 – it will be Botswana heavily featured, which gives lots of opportunity for, say, Belmond‘s lovely Botswana safari lodges to strut their stuff. 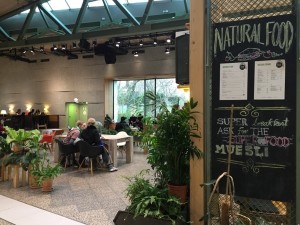 What I find fascinating is the goals of those going to ITB, and what they actually achieve (remember these are 2015 figures). 51.7% had hoped for better investor contacts, yet only 20.2% achieved that goal: by contrast, 89.3% wanted to cement existing business relations, which was nearly, at 82%, achieved – the only category that surpassed expectations was making new contacts, anticipated by 80.1%, achieved by 82.6%. This shows that ITB, like IHIF, is more and more about networking. There were certainly lots of parties going on, as I have already reported. I barely had time to look at Berlin, the city, though I was fascinated by the Bikini mall next to the Zoo. This has a light and airy ground-floor atrium with fascinating shops down one side – they also open on to Budapesterstrasse. The mall is attached to the 25Hours Bikini Hotel Berlin, hence its name. 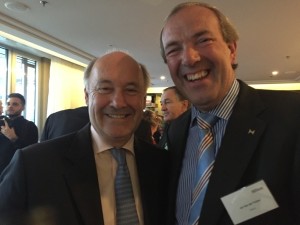 I was on my way to Waldorf Astoria Berlin – see the big picture of its lobby, above. The Abu Dhabi-owned 231-rooom luxury hotel had opened in 2011 and it seemed rather cold at first (see a video of its opening, below). Now, with Gregor Andréewitch as GM, it has sprung to life. Certainly, that evening, the Presidential Suite occupying the whole of the 31st floor hosted one of the liveliest and most entertaining parties around. There was a video of the IBM Watson robot at Hilton’s hotel in Maclean VA, and a speech from Hilton’s Europe President, former banker Simon Vincent, recognisable by bright scarlet glasses. And the strong and powerful Hilton-family contingent included the head of Middle East and Africa, Rudi Jagersbacher, and his Johannesburg-based colleague, Jan van der Putten.