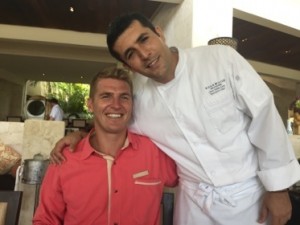 Now that ILTM Americas was over the 650-or so people, from all over the world, headed for home – just as on a cruise, exactly the same cast of people will never again exactly form the same group, ever. But before leaving Mayakoba and its luxury hotels, the gal had to say one final farewell. Over at Rosewood Mayakoba she met up with its GM Daniel Scott and its Executive Chef, Juan Pablo Loza, who was formerly at Belmond Maroma (before that, Juan Pablo had worked with the Maccioni family, and at Las Ventanas al Paraiso, where he had met up with his now-boss). The two are obviously the best of friends – they had recently been shopping in Oaxaca, where the salmon-coloured shirt comes from. They are both actually best of friends with everyone. The hotel is rather like that. 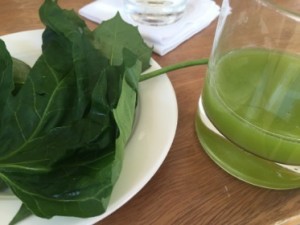 A brilliant IT guy was summoned to sort out my MacBook Air. Nothing to do with the machine but Safari would not stop whirring, that frustrating multi-coloured ball. Vincente sorted it out while Lutz Arnhold offered a glass of green drink. What is it? Chaya juice, better for you than kale. They brought a leaf, but do not bother to taste that, I was warned – it was pretty tasteless. As a juice, and blended with a little pineapple juice, it was delicious. All the while, during our lunch, Daniel Scott was popping up and down to greet people, hotel guests and lunch-only. He is the ultimate people person (after leaving school in Chicago, where he had many hispanic friends, he came on to Mexico to study). 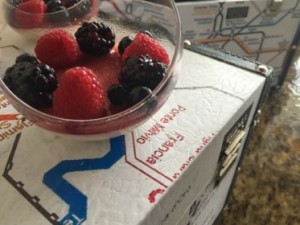 While he is talking to others I look around the restaurant. Marvellous, satellited print outs of the Financial Times and New York Times. I look out of the all-glass walls down to the pool. I spy fascinating boxes, covered with underground maps for London, New York and Paris – they are used as display for buffet items. Our guacamole arrives (yes, I cannot leave town, so to speak, without a final fix), our salads come, and then Spa Manager Emmanuel Arroyo arrives, obviously by prior arrangement, and we walk down to Senses spa, past a fabulous flower garden where housekeeping maids come to pick blooms for putting into the resort’s 128 villas, all with pools. 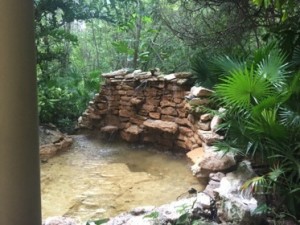 The spa’s relaxation area now has a pool and fountain

I was shown the spa’s outdoor relaxation area, which now has a new fountain. I was also shown something very secret, to be unveiled in November (and I promised not to reveal it even to you, dear reader, sorry). And then it was time to leave, and guess what, this very-model of a modern-manager, the luxury Rosewood hotel’s GM Daniel Scott, personally became bellboy, found the stored Porsche Rimowa wheelie and it, and me, into ILTM Americas transportation vehicle to go to Cancun International Airport. This, by the way, is second in size and importance in Mexico: one third of all the country’s international tourists come to Cancun. The international departures facilities are an absolute disgrace. Skyteam has a lounge, the other alliances do not, and there is no free Wifi in the cramped general seating area. I had to pay $35 to get into a tiny, noisy generic lounge, water in plastic glasses, too-few sockets (all US) – but the WiFi worked.