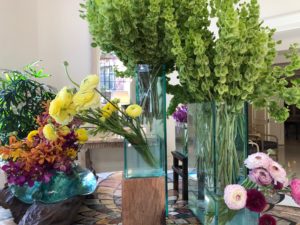 Flowers in the lobby…

As the world of luxury hotels knows, what is now Rosewood Mansion on Turtle Creek is responsible for a lot.  It could be said, says the gal, to have changed the whole evolution of the sector. First, it started as a private house, built in 1908 for cotton baron Sheppard King, who trekked through Europe with architect J. Allen Boyle to find items to rival William Randolph Hearst’s San Simeon castle.  This means that, today, the original house has marvellous grapevine-entwined stone columns, and wooden doors from an ancient Spanish cathedral, and the bar, such a gathering place for local cognoscenti, night after night, has a ceiling inlaid with over 4,000 bits of European wood. 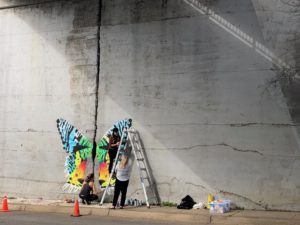 .. flowers and butterflies being worked by nearby street artists

The restaurant opened in the former house in 1980 and two years later an adjacent hotel wing was opened. Today, the hotel has 143 bedrooms, and it is rumoured they are about to be re-done – I will wait until after that botox before making a video to show you.  I did have a marvellous stay: the team, many of whom have been around for some time, work as a well-oiled machine.  Where else do you find a bunch of bellmen, and bellwomen, who all look like senior bankers or doctors, there to help. They never seem to put hands out, in expectation of the phenomenon that is as American as a Big Mac, namely a tip?  No, this crew is much too professional, and genuine, for that.  I wonder what they say, however, when people arrive on scooters, also quickly becoming an American essential. 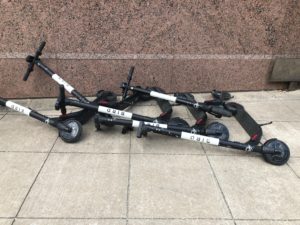 An art work of scooters, on nearby McKinley

The whole area has been considerably cleaned up since my last visit a couple of years ago.  I had some great walks through Turtle Creek Park to the boutiques and restaurants of McKinney.  Along the way, a couple of college-type girls were doing butterfly graffiti on the underpass of the Katy: this is the unused stretch of the 1865-vintage Missouri-Kansas-Texas railway, of which a 3.5-mile stretch is now a public running or walkway between the American Airlines Center and Mockingbird Station. When the weather is nice there are so many out exercising – the hotel also has a good Matrix gym, 24/7 and, bliss oh bliss, its televisions work. The hotel’s momentum is stimulated by its influencers, designer Zac Posen and local socialite Kimberly Schlegel. 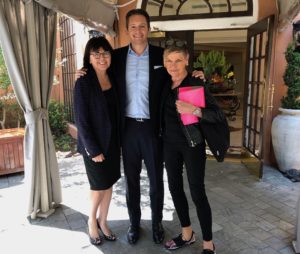 Restaurant business is also boosted by the property’s club. 570 locals are invited personally, and they get not only prestige but dining benefits. My own dinner included a Bar N Ranch ribeye with farmers’ greens and shaved vegetables. I was with the hotel’s MD, Andrea Gates, an Argentinian who seems to have spent her whole life helping people, whether it was teaching English to immigrants or generally thinking of others (the same could be said for her 200-strong team, say chief concierge Mary Stamm, treating guests as long-time friends even if they have not passed by for a couple of years).  I was about to leave the luxury of this extremely comfortable and friendly hotel for what turned out to be an unusually less-than-pleasant Uber when Andrea Gates appeared with a surprise, in the form of Frédéric Vidal, her Rosewood colleague from Las Ventanas al Paraiso in Los Cabos.  What a farewell! AND FINALLY, MEMORIES OF THE ORIGINAL BAR, AND RESTAURANT