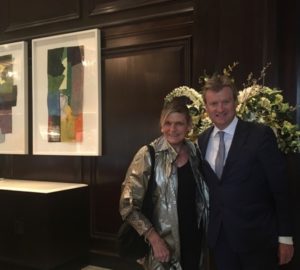 The gal checked into the luxury Rosewood Hotel Georgia, Vancouver, and, like all arrivals, her eyes opened wide at the art. There is an Escher-like three-dimensional oil of an Italian city in mediaeval times (see a closeup, above, and the video below). A little further on, behind the Concierge desk is a two-dimensional, full-size bicycle, in three parts. This is Greg LeMond’s 1974 Cinelli, on which he won 40 amateur races in the 1976-1977 season: the oil, called Jaune, is by Greg LeMond’s nephew, Nickalas Blades, who specialises in ultra-realism oils of bikes, and people, and it is particularly suitable here at this historic hotel as its MD, a Brit called Philip Meyer, wanted as a young teenager to be a professional cyclist. 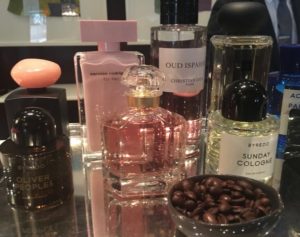 His eyes light up whenever the conversation turns to wheels, or pedals, or gears or to his charity cycle races. But we had other things to talk about. On my arrival, for instance, I noticed a silver tray of designer perfumes. This, it turns out, is the hotel’s Fragrance Butler. It is ideal, I was told, for guests at the 156-room hotel who cannot fly with their usual perfumes because they are more than 100ml in size, or perhaps they have left them at home. I imagine such a thoughtful extra being included when the hotel first opened, 90 years ago this month. Ah 1927, what a year. William Lyon Mackenzie King was Canadian Prime Minister then, with Calvin Coolidge running the USA and Stanley Baldwin the UK. 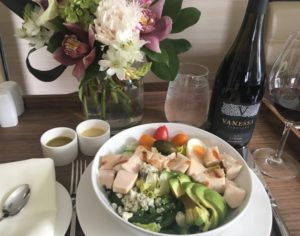 The first transatlantic phone call was made, New York to London, Charles Lindbergh completed the first solo Atlantic flight, and Pan American Airways set up business. There is more. This was the year when the Mount Rushmore Sculptures were started, showing Thomas Jefferson, Abraham Lincoln, Theodore Roosevelt and George Washington. And this hotel was built, to open as the first Western International outside the USA. It was extensively renovated, and extended, to re-open in 2011with an indoor pool and good 24/7 gym, and a stunning fine-weather fourth-floor outside terrace bar-restaurant. The owners must have thought they had everything, but then, September 2015, a Nordstrom opened directly opposite. It has since become the top grossing Nordstrom anywhere, pulling in well-heeled Asian fashionistas, who of course have to stay somewhere… 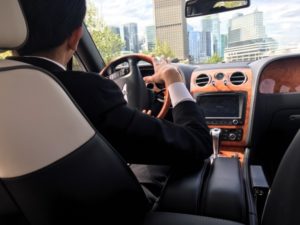 This luxury hotel also now has 156 rooms: see the second video below for tour of suite 1108’s interior, and the views over this part of central Vancouver, overlooking the Art Gallery. Not surprisingly, I chose the 1927 Salad for inroom dining: it was copious, tasty and healthy and went splendidly with a glass of Vanessa Vineyard 2012 Syrah Similkameen Valley BC. This is a hotel that talks commonsense. It leases out its main restaurant and café, which both have significant West Georgia street entrances, to local food man David Hawksworth, but it runs inroom dining and that gorgeous fourth-floor terrace. It also caters the weddings that are popular here – I coincided with a stunning and highly-bejewelled Indian bride, in a Kardashian-type white gown, in one of the three elevators. And then I got into the white Bentley, with its in-seat lumbar massage, and was whisked away…   NOW SEE TWO VIDEOS