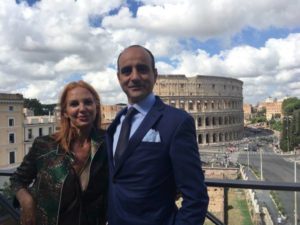 Rome’s Colosseum, after a spring-clean that must have set Tod’s shoe company back at least €50 million, is now sparkling – how pleased those who built it, from 70-80 AD, would have been. Visitors swarm around it, or they would if Italian authorities (see them to the right, in the image above) allowed them to swarm wherever. The luxury hotel that benefits most from the cleaning that Tod’s owner Diego Della Valle authorised is undoubtedly Palazzo Manfredi, a much-loved beauty with only 300 yards of highly protected, ground level ruins between it and the Colosseum. Today, Palazzo Manfredi GM Bruno Papaleo was up on the hotel’s seventh floor rooftop restaurant with German-Italian designer Giorgia Dennerlein. 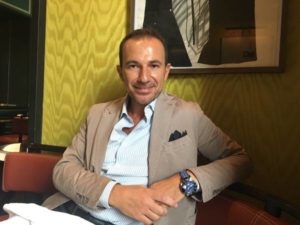 It is she who has done Palazzo Manfredi’s 16 bedrooms, and now she is designing the hotel’s exciting new addition. Four 600 sq ft suites, one above the other, will open a few yards away in the adjacent building that Matteo Thun masterminded – the suites, ready January 2018, all have stunning Colosseum views, and they will be connected to the main hotel by an interior walkway. There will also, says Bruno Papaleo, be an additional restaurant-lounge at ground floor level (cannot wait to come back and see all this). Next, on this busy day in the Eternal City, it was time to get into a limo to see Bruno Papaleo’s friend Samuel Porreca – as I soon discovered, it would have been quicker to walk as Rome’s workmen tend to close off roads without warning, and with so many one-way systems getting around was like navigating a maze. 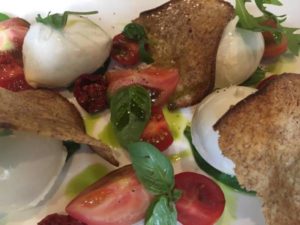 Samuel Porreca is GM of JK Place, another intimate hotel, just off via Condotti and a haven for serious shoppers – his Canadian business is really up, he says approvingly, noting that they are such appreciative guests. Once again I am convinced that even top hotels constantly have to improve. Here, the hotel has just replaced three side-by-side tables-for-two by one long C-shaped, wall-set lounging sofa, with two easily-moved freestanding tables. It is possible now to seat more than the previous-sixand everyone feels at ease. As I ate my yummy buffalo mozzarella balls, smoked and unsmoked and served with a variety of tomatoes, I found I was lounging, one arm spread along the banquette’s rail rather than sitting bolt upright, as my grandmother taught me was good manners. 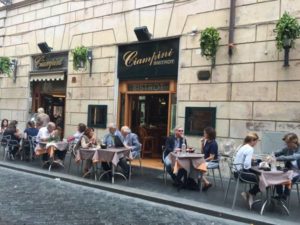 This is simply good food, say beef tartare with black truffles, or, if you go JK-themed, you could do a JK burger, with bacon, cheddar and BBQ sauce, or a JK cobb, with prawns, and/or JK tiramisu, from the mix+match dessert menu (put it with hot fudge sauce, or strawberries, or lemon icecream). Yes, this may be a luxury hotel but you still feel absolutely at home: chic-suited Roman business tycoons, all wearing ties, were at the next table to tourists in baggy shorts and creased overshirts. I left, not daring to waste more time by getting a taxi, and walked along via Condotti. There, as everywhere in Rome, if any eatery has free pavement space it flows out on to it. Eating right next to Ferraris, Fiats or even boarded-off roadworks is part of the thrill of Rome.