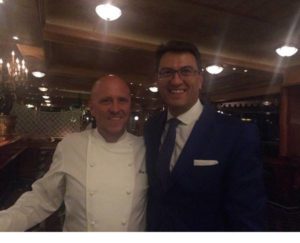 The gal’s final night in Rome was reserved for a unique dining experience, a three Michelin-starred restaurant, La Pergola, on the top of a hotel, Rome Cavalieri, Waldorf Astoria Hotels & Resorts. Yes, there are some other Michelin three-star restaurants that happen to have a few bedrooms, but there are only a handful of serious hotels that, among other highlights, host top-star restaurants (that select list has several Ritz-Carltons, two Dorchester Collection hotels, and one Four Seasons). The Cavalieri is certainly unique in Italy, plus it not only has the outstanding La Pergola but its chef is German. Heinz Beck is one of the most charming, and talented, culinarians in today’s haute cuisine world, as a few lucky gastronomes in Los Angeles and New York will find out as he is going with the hotel’s GM, Alessandro Cabella, for promotions in those cities the first week of April. 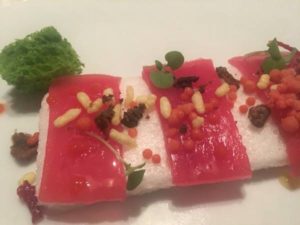 We arrived at our table as if we were onstage in a ballet. Every one of the servers here glides, in unison with their peers, but from time to time each breaks out to do a solo, but then moves seamlessly back into the chorus. Tables are set with pale lemon Pedersoli cloths, and napkins embroidered with your initials. Bronze show-plates go with bronze cutlery, all later removed, and little green bushes. We were offered a 12-page water menu (does anyone actually choose the €340,000 Fillico, its bottle encrusted with Swarovski stars and a crystallized rhinestone crown, a miniature of the one belonging to Emperor Frederick II, 1194-1250?). We had Evian, at €9. Instead of the 10-course tasting menu we went à la carte, starting with the most sensational tuna and tomato confection, strips of tuna on top of a white paste, not burrata or mozzarella but something miraculously resulting from a Beck culinary experiment. 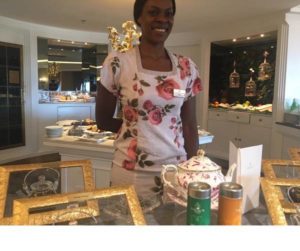 What does make three stars? Amuse that consisted of three one-bite delights, including a small green sponge with something creamy on top of it, and eight salts, each in big glass jars, helped – I had pink Peruvian. Another amazing touch was, on leaving, being presented with a card, shown above (it is a copy of one of the hotel’s many treasures, an Aubusson tapestry, signed M.R.D.B. Fourie, showing The Palace of Circe): inside is a reminder of my dinner. Tuna with tomato variations was followed by a Heinz Beck creation, Fogottelli La Pergola (half-open pasta balls, light as air), and Seabass all’acqua pazza. Wines were Olivini Lugana 2016 and Montevertine Le Pergole Torte 2011. Even the young woman who handed the card over was Italian three-star, as are many who work here. In the seventh floor Club lounge, servers wear, by day, the most gorgeous floral dresses that match the china teapots. At night, they change into black cocktail gear, with pearls. 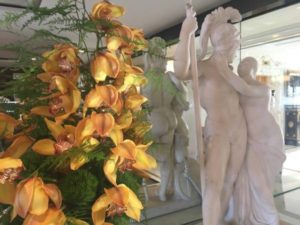 Many things add up to Italian style. Bedrooms at this particular luxury hotel are a riot of colour. 765, which had breathtaking views down over Rome and Vatican City, dominated by St Peter’s dome, is a confection of sunflower and blues, from periwinkle to gentian, and everything matched (wood furnishings even have discreet blue stripes – see a video of the room, below). Leaving the comfortable cocoon of 765, I am amazed as always by the art and beauty in public places, with classic sculptures, and, in the lobby lounge, the three famous Tiepolo paintings, secured firmly behind glass. Outside I climbed a hillock to ‘talk’ to some of the many bronze animals that ‘stroll’ the grounds, both in front of the hotel and behind, around the swimming pools. Yes, there are many touchpoints to take away from here. NOW SEE A VIDEO OF ROOM 765