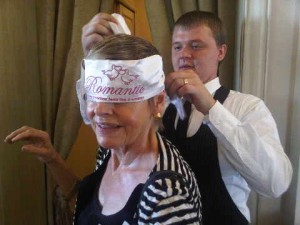 A blindfold (silk-satin of course) is put on before one is led up-up to….

This is honestly a first. The gal is invited to lunch – and blindfolded (admittedly it is an embroidered satin wrap, could be worse).  There we are, three of us in the incredible Radisson Royal Hotel Ukraina Moscow and suddenly this wrap is put around my head.

I am guided up, in two elevators with stairs before, twisting stairs between and more twisting stairs at the top.  What a good thing one guy is leading me ahead, and one is calling the stair direction (‘half right, straight ahead..’) from the rear.  Were it not for these two minders girlahead might be passé. 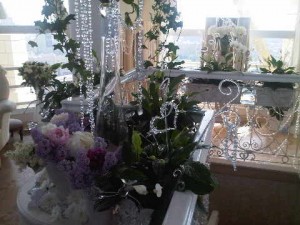 The blindfold is removed.  Wow oh wow, we are squeezed into one of the world’s two smallest fine dining rooms for two (the other is at the top of Three On The Bund in Shanghai).  This is the Romantik Restaurant, at the summit of the middle pinnacle of the 34-floor wedding-cake-like Stalinist Ukraina building.

This is the most desirable restaurant in town, above the top floor, and sometimes, apparently, young ladies are blindfolded before they leave home so they have absolutely no idea where they are going. 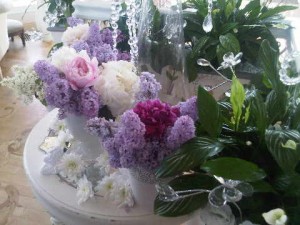 You have an amazing 35th floor view, and you are surrounded by flowers

This is one of the signature restaurants of the Ginza Project, started only 2003 by Vadim Lapin and Dimitry Sergeev.  Now they have 27 individual restaurants, in their home base of St Petersburg, and here in Moscow and in Rostov and in Miami and New York (they also do catering, VIP taxis and much more).

Their design department has gone overboard here.  They have filled the restaurant, which is nine by nine feet at most, with one table for two, with white paint, white candles and hundreds of sweet-smelling flowers. 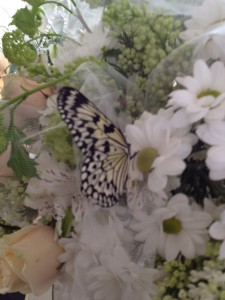 After a successful proposal is made, butterflies are released (photo courtesy Jesper Henriksen)

Come to the Romantik Restaurant to propose, or rather, if you have been blindfolded, to be proposed to. Generally the manager knows what is going on, and hides the ring in a bunch of flowers, or at the bottom of a glass of champagne. Real live butterflies are released.  Have dinner, and tiptoe, or stagger, back down the stairs, unblinded this time.

Apparently Sharon Stone was here once – not, one presumes, being proposed to but she is a good friend of co-owner Telman Ismailov – and as she went down she straightened all the wall-hung framed photographs of happy brides who had accepted proposals up there.

Since there were three of us we obviously could not eat in that upstairs restaurant-for-two.  We opted for another of the restaurants that Ginza runs in the Ukraina, Buono. 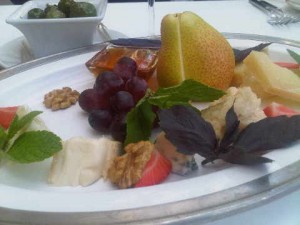 Pre-meal at Buono, on the 34th (main top) floor of the Ukraina, you get a dish of fruit and cheese

This is like a terrace cantilevered, two tables wide, around all four sides of the highest main (34th) floor.  The central indoor part has a big wood-burning pizza oven. The outdoor part is conservatory-like, with glass outer walls bending over to form the ceiling attached to the heavy stone of the tower’s original mid-20th century wall.

What with creepers and plants and the sun shining outside it has a slight hint of the terrace of Villa San Michele, Fiesole.  Someone brought nibbles, cheeses and fruits. 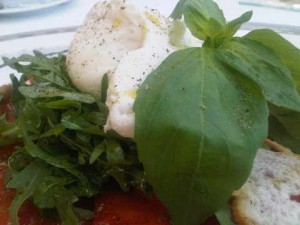 Someone else brought breads, grissini sticks and herb focaccia. There is more than a hint of Il Mulino at Acqualina on Sunny Isles Beach about the menu; this is real, traditional Italian food, cooked by Ginza’s own chef, William Lamberti.

His burrata is magnificent, with tomato slices and big sprigs of arugula.  I wipe my mouth delicately, Emily Post-style, on a really old-fashioned embroidered-linen napkin.  Some of the plates are majolica ware, more reminders of Italy. 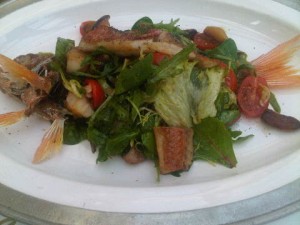 A red mullet salad is just that, salad with fish bits atop a mullet (well, its head, backbone and tail)

The restaurant fills up, with the type of Muscovite who pays to belong to the health club downstairs (a mere $10,000 a year but you have the world’s largest gym and that incredible five-lane pool, over 150 feet long?).

Work out, eat out.  Have a red mullet salad here and it is just that, a whole mullet, now only head, backbone and tail, supporting the salad. 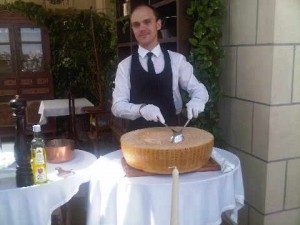 One signature is the homemade tagliatelle tossed in fresh black truffle, or so I thought.  In fact the tagliatelle is tossed with cream in a hollowed-out whole parmesan.

It is presented in a china bowl set in a hallmarked-silver salver.  The waiter in his white gloves grates truffles from Alba over.  Eat all that gal, do not waste a morsel, and think of all that working out you have to do to make up for eating out.