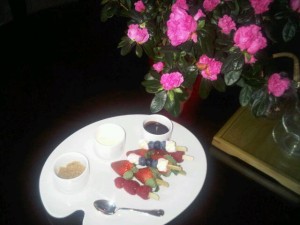 From time to time everyone, let’s be truthful, wants to be child-free.  Four Seasons arguably ‘invented’ cosseting the little darlings, by putting in outstanding kids’ clubs (by that the gal means outstanding clubs for kids rather than clubs for outstanding kids).

Company CEO Katie Taylor spoke at least a decade ago of the necessity of, wherever possible, having a second pool, for kids, at all Four Seasons resorts.

So now Kids Rule, to many.  And it is probably the right time to offer an alternative, but you cannot call it Kids Free.  Trust Four Seasons, with all its luxury hotels, to come up with a solution.

The company is trialling Couple’s Suites at Four Seasons Singapore, and the gal was lucky enough to try one of the first. 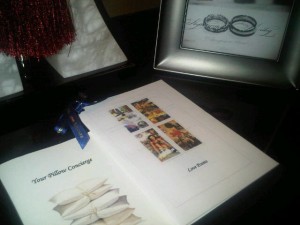 By the bedside, a pillow menu sits next to a book of love poems

GM Antoine Chahwan has turned the entire 11th floor of his 254-room hotel into Couple’s Suites (it was quite easy, he says, as there are few connecting rooms on that floor).

The design of the rooms has been ‘enhanced’, and lots of goodies added, as I found out. Whatever rate the room commands, a surcharge of S$50 is charged…

I think I missed out on a welcome drink, which is something a travelling’gal does not always need, anyway, as she may want to head straight to the gym.

Anyway, as I exited the elevators on the 11th floor I did not miss out on the listed plate of canapés – today, currently tuna toasts, with a label to identify them, and of course, being Four Seasons, they are under a hygienic clear glass dome and there is a stack of paper napkins. In the room, skewers of fresh berries awaited. 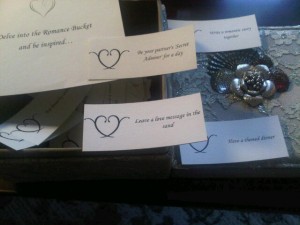 Open a jewelled box to find 101 ideas for romantic touchpoints

Suite 1107 could, admittedly, be a bit of a challenge since it has an interior, which means windowless, bedroom – but for the fun, which means sex, that the word Couple’s communicates, having no outside window is a mega-plus as you can have fun, rock’n’roll nonstop round the clock.

A couple of velvet cabbage-like cushions adds to the emotional ambience.  Four colourful M&M china pots on one small table, for dipping into wrapped candies when the whim takes you, add to the naughty-child feel.

A richly jewelled box, a poetry love basket, similarly invites me to dip in.  I do, I take the lid off and find lots of suggestive ditties. Pull out one of the hundred-and-one paper slips inside. 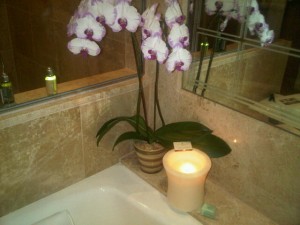 The bathtub is guarded by fresh orchids and big candles

I find such ideas as ‘Leave a love message in the sand; Be your partner’s Secret Admirer for a day: Write a romantic story together; Eat dinner by candlelight; Men – talk more (women – touch more); Have a themed dinner’… and many more.

I long for the other half of my own ‘couple’ to take advantage of this Valentine’s Day every day of the year feel. Albeit incongruously, free internet comes with this package, as do card shields for one of the couple to hold up, as if saying ‘kill that iPhone, lover-boy’.

Candles act as guard of honour by the bathtub, which of course also comes with a bath menu, and there is mood lighting.  Talking of mood, what are you in the mood to buy further?  Buy a luxury morning experience, perhaps Bloody Marys and full breakfast in bed for you both. 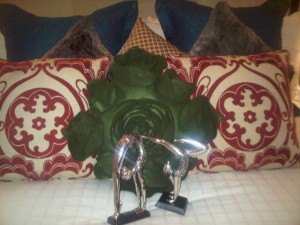 A pair of lovers' statues, normally by the television, temporarily rest by a cabbage-type cushion on the bed

In case you need moral support, a book of love poems is provided.  Take e.e.cummings’ words: I carry your heart with me (I carry it in my heart) / I am never without it (anywhere I go you go, my dear, and whatever is done by only me is your doing, my darling)…  You can also follow Anonymous, who writes: Dreams, Wishes and Tears by Sir / If wishes were given to a lonely man / And I was given just two / I’d wish for you to always love me / And the other I’d give to you.

Apparently dozens of couples, all shapes and ages and gender, are latching on to Couple’s and loving it.  One big draw, not surprisingly, is that housekeeping staff come nowhere near you until 1200 midday. Sadly, the gal was by herself on this visit, but she cannot wait to come back, with her Man. 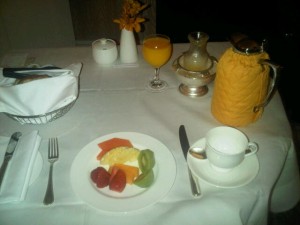 15 minutes exactly after calling down, breakfast arrived (notice how the coffee pot's cosy exactly matches both juice and orchids)

This time, all by her little’ole self and somewhat lonely, she took advantage of Four Seasons’ newly-introduced 15-minute room service.  She called down at 0515 (yes, another early flight!) and sure enough, at 0530 precisely, a crisp set table was wheeled in, with a toaster which the server plugged in.

The bright orange padded cover for the thermal coffee pot exactly matched a vase of orchids, and the carafe of fresh juice held in an ice bucket.  She made her toast, using the tongs provided, and felt good about life, and Four Seasons.

She did not, however, feel so charitable a few minutes later when waiting for a taxi.  She now knows that no cognocenti attempt to order a taxi in Singapore between 0600 and 0700 every morning as that is shift change. Travel is always a learning process.