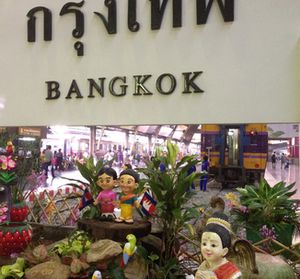 Time for a change from luxury hotels, although this is luxury travel of a different sort.  The gal is getting on the Eastern&Oriental train for the trip of a lifetime.  Many of the 111 passengers on this particular journey, from Bangkok to Singapore, have had it on their to-do list for ages, and somehow made it possible. A former senior manager with British Rail in the UK put together a fascinating preamble, with some friends.  They started in London, took a train to Moscow, another one to Beijing, another to Hanoi and on to Ho Chi Minh City – then they flew to Phnom Penh, and to Bangkok. 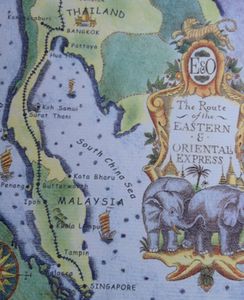 Our route, north to south

I merely arrived at Bangkok’s Hua Lam station by hotel limo, to join people from all over the world, a few other singles but mostly couples or more. Honeymooners, uncles and nieces, fathers and daughters, mothers and daughters.  Bangkok station is not as salubrious as, say, Shanghai’s Hongqaio but never mind.  The Eastern&Oriental train is managed by Orient-Express and they have an agreeable pre-boarding waiting room.  People’s heavy baggage was taken away to be stored onboard as there is limited room in the cabins, or state rooms or suites or whatever you want to call them, but more of that anon.   While waiting I looked at the map.  We were going to travel 1,200 miles, from Bangkok south to Malaysia and across the causeway to Singapore, a total of three nights, with half a day tacked on each side.   Ah time to board. We walked, as if pre-school darlings, around the station to the gleaming train, all 22 carriages of it.  The stainless steel frame of the train was built in Japan in 1971, by Nippon Sharyo & Hitachi.  The client, New Zealand Railways, ran it as the Silver Star for 20 years from 1971, after which it was sold to the Orient-Express visionary, James Sherwood, a train fanatic.  He shipped it to Singapore and had the interiors most beautifully designed and hand-crafted. There is marquetry of cherry, elm, rosewood and teak.  Carpets were handmade in Thailand, and curtain pelmets were embroidered in Malaysia.  The train launched September 19th, 1993, and its 20th anniversary will be celebrated with a special journey, starting September 19th, 2013 at Raffles Hotel, Singapore. 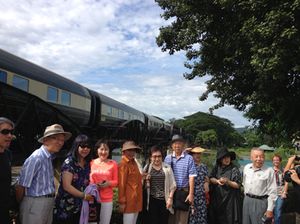 Posing in front of the train on the River Khwai bridge, passengers…

Anyway, I am getting onboard. At the door to carriage four, a smartly-uniformed Thai steward helped me up, and along to my cabin.  There are three categories, rising up from Pullman, via State to the least compact, Presidential D-4 a State Suite, absolutely fine for a fit and slim young lady.  I unpack, and get ready for our first excursion.  We are going to the Bridge Over The River Kwai – in reality the name of the river around which Pierre Boulle based his novel that led to the 1957 movie is the Maeklong but this part of it has been changed to the Kwai, for a short stretch.  While the train is parked on the bridge we all take photographs (a group of Taiwanese is very hot on this).  We take a raft trip. 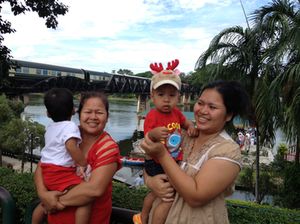 An Australian, Andrew from the Thailand-Burma Railway Centre that we are later to visit talks, on the raft, with a big map.  He explains how Cdr Perry came to Japan in 1853 to demand open trade with the US which later led to concerns, and sanctions, over Japan’s activities in China. In 1941, with their economy in ruins, the Japanese needed basic materials so they decided to go to war, with simultaneous assaults at Pearl Harbour, Hong Kong and Malaya. By 1942 they needed to get supplies from their ally Thailand west to Burma, hence the need for a railway. It was to be a five-year project, working dry seasons only, and the Allied prisoners of war would be well-treated. Well, as we know it turned into a one-year project with appalling conditions and hundreds of thousands of deaths. 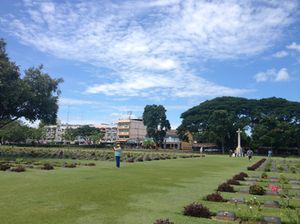 Kanchanaburi cemetery stretches, it seems, for ever

We went on to the Centre (Andrew disappeared behind a closed door, never to be seen again). We toured the two-floor museum in growing sorrow. The lifesize maquillages of makeshift operating theatres, using upturned broken glass bottles as drip feeds, made me choke, as did the perfectly-knitted sock made by a PoW, using bamboo needles and lengths of wool from old socks, presumably from the many who died along the way.  After the Centre, we went to Kanchanaburi  cemetery, where thousands of Allied PoWs have been re-buried.  Each grave has a near-flat identical stone with name, regiment and age – I saw one in his 50s but average seemed to be 23. At the time, the PoWs were so well organised that when one of their number died, his details and whereabouts were recorded by those who survived. One who did, Eric Lomax, is inspiration for the Colin Firth and Nicole Kidman movie just released, The Railway Man, producer Andy Paterson. 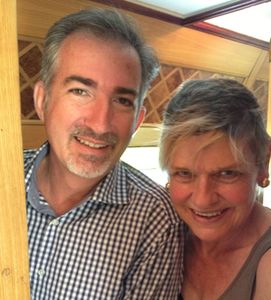 After that we were back to the train, a kind of bijou luxury hotel on wheels. In overall command, from his Bangkok base, is Frenchman Number One, Nicolas Pillet, from Brittany.  A one-time chef who progressed up to hotel management. he was most recently running Orient-Express’ Ubud Hanging Gardens in Bali.  He loves being on the train, he says.  The logistics are highly complicated. All linens and food and drink for this journey have to be boarded in Bangkok – I have three sets of linens, wrapped a day-at-a-time and stored in a square pouffe on wheels that doubles as table for breakfast and afternoon tea.  There are 55 crew, including three engineers with spare parts, and security who man the last-car, open-sided Observation Car 24/7 – they eat where and when they can.  I have learned more than enough for one day.  To bed. The day-time wall-set settee in D-4 has been flipped over, 180 degrees, to form a bed with finest white linens, and two pillows. A logo embroidered blue cotton robe, with matching slippers, is neatly folded on top.