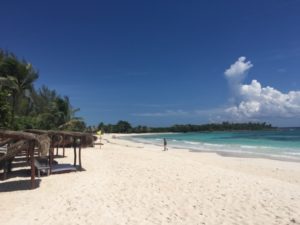 For those who want a unique luxury hotel in Riviera Maya, Esencia is the natural choice. At present those staying in its mere 31 rooms and suites have nearly two miles of absolutely private white sandy beach (as of 2017 eight more suites will be added). Everyone staying is waited on hand, foot and to every whim, when wanted but otherwise left alone, by 180 willing and smiling team members. These are, says the gal, led by two ‘different’ hoteliers, the onsite boss, Yurij Gabassi, left above, who admits he was always a rebel in his youth in Molle, southern Sweden, and his deputy, the equally characterful Alessandro Rossi, formerly a Prada executive. 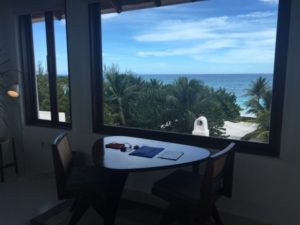 View from the Princess’ bedroom, up 56 stairs from the ground

Esencia was built as a private home by an Italian princess, now up in heaven. It became a hotel and was bought in 2014 by Kevin Wendle, obviously another character with a history of various successful media and technology start-ups and a personal penchant for collecting furniture by such names as Le Corbusier, Serge Mouille, Pierre Guariche, Charlotte Perriand, Pierre Jeanneret – some of his pieces, together with his paintings by, well, Botero and Warhol and a few others, are discreetly set around public areas of the hotel. The day he actually bought Esencia, Kevin Wendle happened to sit opposite Yurij Gabassi, then helping a Frenchman reposition failing hotels throughout Riviera Maya, and persuaded him to jump ship, to land on, and lead, Esencia. 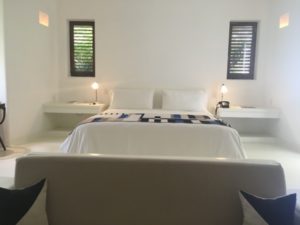 All rooms have a Mykonos-Santorini feel

It does sound as if Kevin Wendle has a lot in common with Steve Jobs, by the way. Mr J was a micromanager who was also a genius and apparently Mr W, who spends a lot of time at Esencia, is the same. But the result is brilliant. Every year, every one of the rooms, which all look like Mykonos or Santorini inside, white white white and nothing else except for a few highlights, are completely stripped and re-made, to achieve perfection. Colour highlights include local Mexican scatter rugs and cushions (a feeling of locale also comes into the minibars which, apart from Veuve Clicquot, hold exclusively Mexican products). More colour is in the collateral, either royal blue, or sunflower and white stripes, specially designed by C.S. Valentine of Bogus Studio. 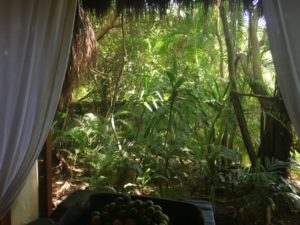 All spa rooms have plunge pools looking straight out into undergrowth

This is the luxury resort for the discerning, the entertainment and fashion crowd – Jason Wu married here, this April. No names are mentioned but celebs include rock and sports stars, and also finance biggies. They love the spa, a round structure with five wedge-shaped rooms all with private plunge pools looking straight into the undergrowth. They love the two-floor open-sided yoga pavilion and, oh, the boutique is filled with totally covetable items, jewellery and shoes and robes and more, even for little kids (one of the two pools is family-friendly). See why I say this is a unique resort? SEE A VIDEO, BELOW