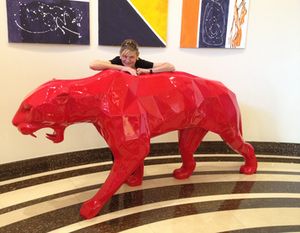 A snow leopard at The Ritz-Carlton, Almaty

A snow leopard (barys), as seen on tenge banknotes and the city symbol of Kazakhstan’s major city, Almaty, provides an unusual welcome at Central Asia’s newest luxury hotel, the stunning 37-floor soaring icy-blue glass sculpture that is The Ritz-Carlton, Almaty.  It opened January 1st, 2014, and already, says the gal, the guest list has included Prince Harry and his girlfriend Cressida Bonas, and every single member of the family of the President of The Republic of Kazakhstan, Nursultan Nazarbayev. 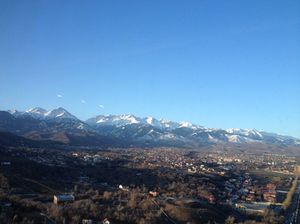 Look to the mountains

From the leopard, you walk past a cascade crystal chandelier that falls from ceiling to floor, landing on it as a curtain that deliberately flows on to the floor. An elevator takes you up to the 30th floor lobby, and another elevator takes you down to the 145 bedrooms, from the 20th floor up.  I definitely recommend something on the 26th floor, for entry to the gracious club lounge. And, wherever, look out at the view.  2614, thanks to clever designer Peter Silling, has lots of mid-tan woods, creams, light olive and teal, and a bathroom coated in marble streaked in lime green and olive. 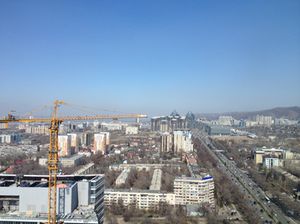 .. and along Al-Farabi Avenue

Peter Silling also designed Ritz-Carlton Moscow, which was similarly developed by Capital Partners, who own this, the entire Esentia development with three blocks of private residences, still to be finished, plus the adjacent Esentai uber-luxury shopping mall, as well as Haileybury School opposite, and the Shymbulak ski resort that I shall visit. Back to this hotel. Face north, and you look up to the snow-capped Trans-Ili Alatau mountains. On a sunny day, this is one of the world’s most glorious wake-up to views. 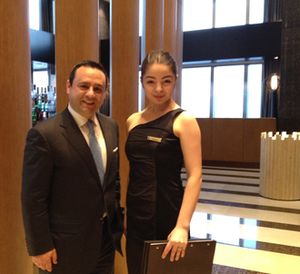 GM Joe Ghayad and a LT Bar and Grill hostess

Turn your head to the left, or look through another window, another view, and you look along Al-Farabi Avenue to more new glass sculpture-buildings, including two in the financial district with mountain-cap tops (architects like glass here, even though the city did have its last earthquake only three years ago). The first thing to do, after a long overnight flight, was to head to the Six Senses spa, on the 20th floor.  This is a haven of de-stress – you walk over river stone channels, in the corridor, that deliberately slow you down.  I love the Thai massage room, with a backlit brick-look wall complementing the sand colouring throughout the spa.  A Vietnamese lady introduced me to Nannic products, and after a good Technogym workout and a swim – oh look out at those mountains – I felt human again. 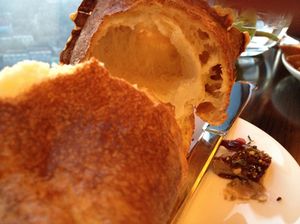 A popover big enough to pop into

With a Lebanese-Québecois GM, Joe Ghayad, and a French chef, I knew the food would be good. We dined in LT Bar and Grill, a partnership with Laurent Tournadel. We walked down 53 glass steps, a catwalk from the 30th floor lobby to the 28th floor space, to be met by quite one of the hotel world’s most fashionable hostesses, in a skin-tight, one-shoulder black cocktail gown. As we walked through the bar area, Joe Ghayad showed off the most covetable seating spot in town, seven (the lucky Kazakh number). Sit here, at this corner table, and You Are It.  In the restaurant, we looked through to the open kitchen, eschewed the sushi, the raw bar, the 26-ounce US cowboy blackened ribeye, for soup, poured over, with magnificent almost big enough to climb inside, popovers. After seabass and lime-flavoured frozen yoghurt, it was bed, and sleep like a log. 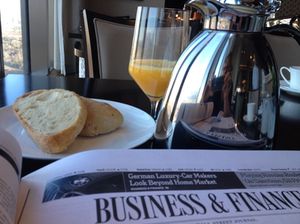 In the morning, they had opened the gym for me early (always a sign of a thoughtful luxury hotel, aware of its customers’ well-being).  At breakfast in the all-day Vista, I looked out at the mountains. I could also see them reflected in my big shiny pot of outstanding coffee – and, by the way, whoever makes not only the popovers but the breads here, especially the ciabattas, should win the world baking cup. I wish I were coming back for the Mercedes-Benz Fashion Week April 25-27, 2014, and also, the Opera Ball, for the presentation of 72 debutantes, May 16-18, 2014. But, meanwhile, what is on the agenda today?  Yesterday there was time for the adjacent Esentai Mall. Today it is sightseeing and snow…