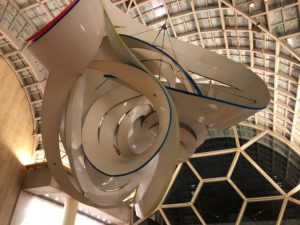 Looking up at the lobby ceiling

Oh what a difference a warm welcome makes, whether checking in for a flight or arriving at the airside lounge and, especially, arriving at a luxury hotel.  Top of the list here for genuine welcomes must at least be shared by Ritz-Carlton Millenia Singapore.  Despite having over 300 arrivals, most on the same day, for last week’s inaugural International Luxury Travel Market ILTM, the hotel made every one of those travel industry people feel special.  For first-timers, it must have been double wow.  The gal, coming back yet again to this unique 608-room hotel, it was wow as always.  Look at the art, for instance – there are over 4,000 modern works, including pieces by Chihuly, Hockney, Stella and Warhol. 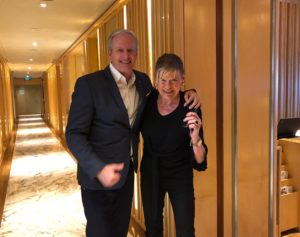 The hotel is unique for many reasons.  For a start the 32-floor structure has a massive hole through it, to let good spirits through and bad spirits out.  Its porte cochère is a  mother-of-pearl umbrella. Its lobby shines with marble, which extends down the 50 curved steps to meeting areas (where ILTM’s opening Forum was held) and on down to base, to the pool, covered over for one of the most memorable parties for 1,000 that I have ever been to.  See a video below.  Down there, too, is the 24/7 Technogym, with lots of fresh fruit. I was lucky enough to spend time, as well, in the ocean-themed spa, designed by SPIN. Enter past a guard of honour of eight marine-blue coloured glass sculptures, and as you walk along to the treatment room marine-blue light glows from the walls. 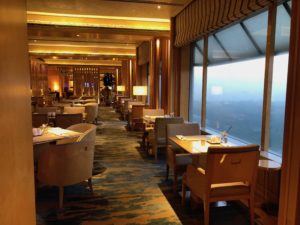 And of course La Mer, the products the spa uses, just feels the best. But some would say everything is the best here (it was amusing to see at least one of the top media people staying here during ILTM having breakfast here, in the 32nd floor club, before going out to an official breakfast at another hotel.  One night I even dined in the club before a drinks function elsewhere, and, honestly, sautéed eel with wok-fried greens was a healthy, and memorable snack, with a glass of St Hallett Barossa 2016 Gamekeeper’s Shiraz from the eight-bottle oenotheque machine.  Sheila Benzon, who runs the club, has a team of 12 and every day they go through arrivals and, as if they were all IBM Watsons, memorize names and how to pronounce them. 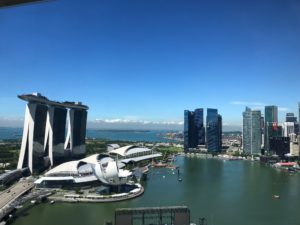 Somehow this filters through to the entire 560-strong team – even bellmen call you by name.  Somehow, too, the hotel operates on staff turnover that is just over half of the Singapore norm. This is a luxury hotel that runs as smoothly and efficiently as the Berlin Philharmonic, with oodles of practice but also spontaneity, and just as any good orchestra needs a first-class conductor, so Ritz-Carlton Millenia works because of its GM, Peter Mainguy.  He has time for everyone, and makes them all feel special.  For me, for instance, he even came in an hour early supposedly for breakfast, though he only had a cappuccino. I, like everyone, felt really special.  And that amazing view helps, of course. AND NOW SEE VIDEOS, OF THE POOL-TOP PARTY, CLUB BREAKFAST, AND SUITE 3116