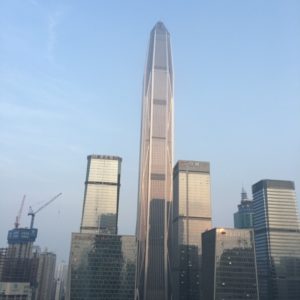 Looking out (Ping’An tower is tallest)

Shenzhen’s two luxury hotels right next to the Convention Centre are separated by a lush area about 300 yards wide, green at ground level but open to superior shopping several floors below. From the gal’s suite 2007 at The Ritz-Carlton Shenzhen, therefore, the view one way looked across this greenery to Four Seasons Shenzhen and, behind it, the 118-floor Ping’An insurance tower and, to its left, construction that will one day be Park Hyatt Shenzhen. Suite 2007, by the way, is absolutely lovely – see the video, below, for a panorama that includes its most attractive private balcony, big enough for Dedon-type seating for four. 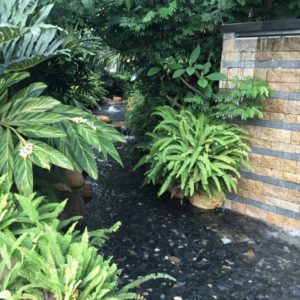 Walking to the pool

This hotel not only looks out at greenery – as well as futuristic skyscrapers – but it also offers an outdoor walkway without going down to ground level. Head for the fifth-floor pool and you walk as if going for a botanic adventure: how I wish more developers and designers would follow the lead of, say, PARKROYAL on Pickering, Singapore, by putting in a proper greenery-flanked walkway that wanders the entire perimeter of the building, in that case also on its fifth floor. Here, in Shenzhen, the walkway leads to the 80-foot outdoor pool, highly welcomed by many of the business travellers who make up about 80% of hotel guests here (they also use the gym, extensively, as do local members). 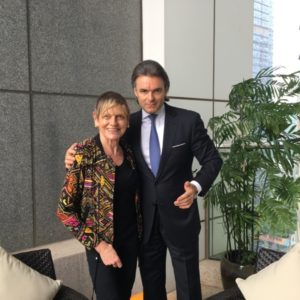 Iwan Dietschi, Swiss GM of this 282-room hotel, embodies hospitality passion. While his 500 staff colleagues, a number that includes lots of trainees, are all, as usual in China, housed in hotel-managed dormitories, he personally lives in the hotel. The time he would otherwise have spent in commuting is, to some extent, filled with writing personalised welcome notes to VIPs in handwriting that is so calligraphic I almost want to frame my note – I also loved having a welcome note, with their combined photo and names identified, from the nine guest relations ladies, who include one from Moscow and another, who heads the 26th floor Ritz-Carlton Club Lounge, from Tel Aviv. 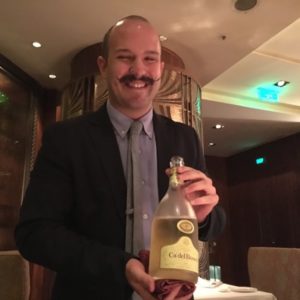 There are several noteworthy foreigners at this luxury hotel. Executive chef Dieter Greigeritsch is Austrian. Paletto restaurant has both an Italian chef, Stefano Nicodemo, from Sardinia, and an Italian manager, Dario Schiavoni, a memorably-moustachioed connoisseur who this month picked up one of China’s Wine List of the Year awards, 2016. Tonight he presented a bottle of Ca’del Bosco, specially labelled for Paletto: some prefer Bellavista when it comes to Italian sparkling but many, including me, give the top accolade to Ca’del Bosco, owned by the clever Gaetano Marzotto who also snapped up Hugo Boss and Valentino in the fashion world. This is indeed a hotel that does things just right, which includes having a gleaming Rolls-Royce for VIP transfers – in a discreet deep chocolate, to avoid too much bling.  NOW SEE THE VIDEO, BELOW