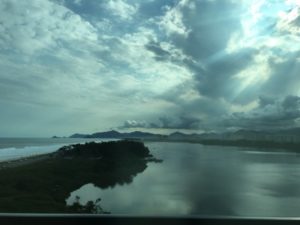 Christophe Lorvo still has an aura around him, honed by his previous role as GM of Grand Hyatt Tokyo. There is a Japanese restaurant, Shiso, in Grand Hyatt Rio de Janeiro – see him, above, in front of a very-Japanese wall. This luxury hotel is unique in that unlike others desperately trying to open in time for the Olympics, it did open, as planned, on March 28th, 2016 (others will miss the entire Olympics buzz and business and afterwards have to cope with being unknown, in what is usually a post-games lull). Right, seven floors, gorgeously set on the narrow strip of land between Barra da Tijuca beach on one side, and Marapendi lagoon, on the other. A silent shuttle boat, says the gal, is ready to take you across the lagoon, perhaps to Hansen Golf Club, where the Olympics golf will be played. 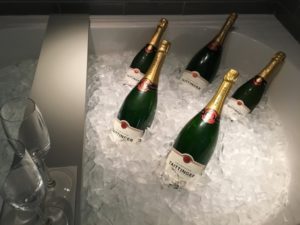 Look what is already in the tub…

My favourite of all the 436 rooms is corner suite 771. It is top floor, for best views and Grand Club access, and its two sides of sit-out balconies face north and west, for beach, lagoon and sunset views. Yabu Pushelberg’s designs are softly suitable, with stunning pale woods (a lot of American white oak), and creams and beiges, with hints of blue, for the water. Amusingly, I had commented at my hard-hat tour in January that the Japanese bath tubs looked like giant Champagne coolers, so look at my tub, when I arrived – in suite 771, naturally – the hoteliers here listen! I loved the suitably firm but comfy bed, and the heavenly Trousseau robe (wear it, have a Spielegau flute of Taittinger to feel on top of the world). 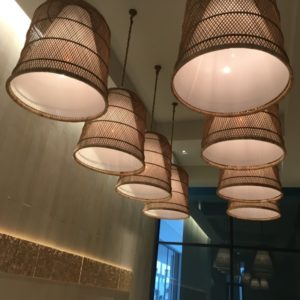 Ceiling lamps in the main lobby

There is more designer magic in public areas, which are vast, skirting around courtyards with living walls, and gardens set around pools, both decorative and swimming variety. The landscaping takes inspiration from the revered Roberto Burle Marx, 1809-1994, who is most famous for his modernist landscape architecture although he was also a skilled artist and musician, and ecologist: he also said never mix flower types, which is the reason suite 771 has displays of single-variety orchids. There are elements of nature all round the inside of the hotel. The tall lobby has complete walls, as well as floors, of local wood, and look at the lobsterpot-like lamps hanging near one of the two blocks of elevators. Tall ceilings come into their own in the restaurants (all of which are designed by Brazilian Arturo Casas): in the bar and the all-day Canto Gastro, for instance, there are ceiling-high shelves holding various bottles, local ceramics, and displays of the venetian gondoliers’ straw hats worn by pool attendants outside. 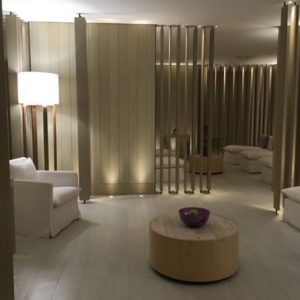 This is a very soothing luxury hotel, an ideal staycation, weekend break for those who live downtown in Rio, about 45 minutes’ drive away. I suspect that many will come, also, for the spa. I had an outstanding back massage from a knowledgeable young lady who, unlike many of her nearly-400 colleagues, had come from another hotel (my driver had previously been an Emirates flight attendant). And those who know the reputations of both Hyatt, and the Frenchman who runs Grand Hyatt Rio de Janeiro, will come for the food, say signature buta bara pork belly skewers or magnificent avocado and salmon-covered sushi with sake or a glass of Angelica Zapata 2011 Malbec Bodiga Cantena Zapata in Senso, or home-made pasta in Tano. To whet your appetite, SEE THE PANORAMA VIDEO, BELOW.