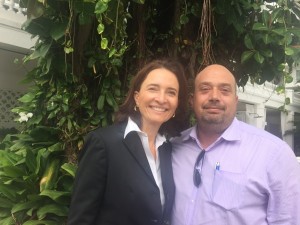 Yes, it is Rio’s Carnaval time, starting February 5th and running through to February 9th, 2016, and the larger-than-life CEO of Rio Convention & Visitors Bureau, Michael Nagy, is bringing in some 40 international influencers to experience the world’s most exciting annual party: every night, samba schools compete, and parades go on for hours. The Bureau’s President, Andrea Natal, in her capacity as GM of Brazil’s iconic luxury hotel, Belmond Copacabana Palace, also hosts the party-of-all parties. This year, the all-night extravaganza, on Saturday February 6th, is themed Olympia Magic Ball. The vast public areas of the 1923-vintage hotel will become Ancient Greece and you can be sure, says the gal, that the costumes will be lifetime memories. 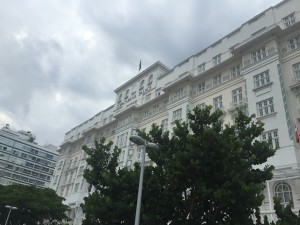 But there are so many memories, anyway, for anyone who has ever stayed at this lovely home-away-from-home. The main-block’s six floor exterior, on the seafront Avenida Atlantica, is subtly painted in six shades of white through to soft grey: set to one side, behind the 100-foot outdoor pool, is a second block, which became a hotel annexe in 1948. The Italian restaurant, Cipriani, and the spa and Technogym are in the annexe, but since the gym does not open until seven I find I can get really good early-morning pre-breakfast exercise by power walking or cycling along the dedicated Copacabana and neighbouring Ipanema beach tracks, going for miles and miles. I can also take the hotel’s stairs in the main block, up and down, all 191 of them. 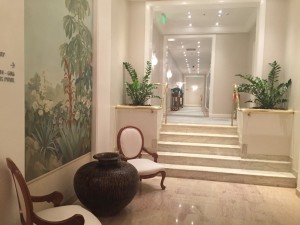 Looking along the sixth floor corridor

All the hotel’s corridors are elegant, but the sixth floor is especially memorable, for champagne colouring with occasional trompe l’oeil floribunda. There were flowers in my suite, 203, too, masses of white flowers that matched the walls, the big candles already lit for my late-night arrival, and the exquisite linens. Luxury? Here there are crisply-starched white-embroidered white linen covers for the night-time eye mask, and even for towels in the bathroom. Here you have not only towel slippers but also Havaianas flipflops, both white, of course. Colour, if you must have it, comes from silver-framed water colours of local scenes, from a photo of moi, last visit to Brazil (also silver framed) and from the intense soft gold of Copacabana Beach outside, and the blue sky over. This was the beach which must have been a riot of colour on July 28th, 2013, when the Pope celebrated mass, to a congregation of over 3.5 million. 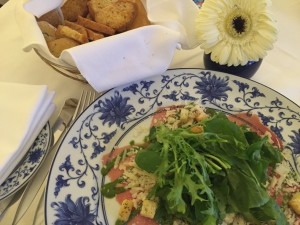 There was colour, too, in my room service dinner. I wanted to savour being back in this luxury hotel and, anyway, I had a lot of writing to do. Look at the china, its beautiful blue pattern. Look at the size of the main plate, a full 12 inches across. There was enough bread for the entire Brazilian army to march on, but I concentrated instead on my beef carpaccio with arugula, followed by tagliatelle with baby tomatoes, and lots of already-grated parmesan. After that, I blew out all the candles, and got into the bed – crispest white linens, of course, but of the daytime complement of a total of ten cushions and pillows piled in military style on it, two were soft blue.