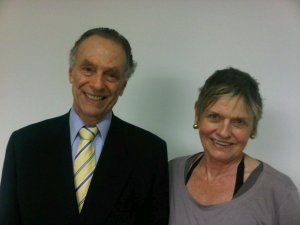 With Carlos Nuzman, in the Olympic headquarters office

Yes there I was, talking with the President of the Rio 2016 Organizing Committee Carlos Nuzman, on 5th August, exactly five years to the day before the start of Rio2016 Olympics, and I was in Rio de Janeiro to see how it was all going.

He had had a meeting that morning with the Mayor of Rio de Janeiro, and then he had his photo taken with his team, numbering at the end of that day 174 (bottom photo). By 5th August, 2016, the team will have swollen to 4,000, plus at least 70,000 volunteers.

But then there had been 2,000 or so involved in the 2007 Pan American Games in Rio, and many of the inner-core have been working with Nuzman ever since.

Nuzman has been working on these games for more than a decade, since 1999 in fact. He and a few others put in an unsuccessful bid for the 2008 Olympics but experience of the Pan American Games coupled with increased effort put into the 2016 bid won out.

The 2016 bid brought in such key players as the highly influential Governor of the State of Rio, Sérgio Cabral Filho, who in turn brought in then-President Lula. Brazil’s best-known businessman, Eike Battista, is thought to have loaned not only his private plane to ferry VIPs to IOC meetings but to have given considerable funds to cover setup costs. Yes, says Nuzman, the involvement of the business community is and will be huge, although it is impossible to calculate what will be the lasting benefit to business not only in Rio but in Brazil in general.

Hospitality is vital to the success of the Games, Carlos Nuzman told me: “We want visitors to come ahead of time or stay on after (or both) so that they have plenty of time to tour this beautiful country. We want our people to smile and be nice, to share passion with celebration. Rio2016 is not only the Games, it is a way of life.” Passion & Transformation is the tagline of these Olympics, broken down into harmonious diversity, Olympic spirit, exuberant nature and contagious energy.

Oh that energy! Rio is of course the home of Carnival and the samba, and Carlos Nuzman wants to invite visitors to see samba schools in action. Carnival might even be added as a non-Games activity, perhaps on Copacabana, Ipanema or one of Rio de Janeiro’s other marvellous beaches. Among the actual participating sports included in Rio2016, by the way, is a return to golf, and a new course is being built at Barra da Tijuca, near the Olympic village (not surprisingly, every top designer in the world wants to do it, says Nuzman with a big smile).

The ability of the city’s infrastructure to cope with mass events will be trialled in June 2012, when Rio hosts the United Nation’s Rio+20 climate change conference, which will bring at least 15,000 visitors to the city at any one time. It will also host some of the games of the 2014 World Cup. Both these events, says Nuzman, will prepare the city, and its infrastructure, for Rio 2016 (only Mexico, in 1968, Germany in 1974 and the USA in 1996, hosted Olympics comparatively close to a World Cup).

Nuzman can reel off facts and figures ad infinitum. Perhaps his long years of being a trial lawyer helps his memory: it has certainly given him attention for the smallest detail, he says. And now his lasting wish is to encourage youth to make the most of life and to express individual talent.

Carlos Nuzman actually participated in the Olympics, in Tokyo in 1964, in the Brazilian volleyball team (that was the sport’s introduction to the Games). Now, his main form of exercise is a stationary bike, and rushing from one meeting to another – as well as leading Rio2016 he is a member of the IOC and also the Pan American Sports Organisation PASO. He never pauses when asked a question.

With whom is he benchmarking Rio 2016, say Barcelona or Los Angeles? Quick as a flash he cites Tokyo, for having the guts to pull off its Olympics so soon after the end of World War II, but, he says, Rio 2016 will turn out to be Number One, for all time. 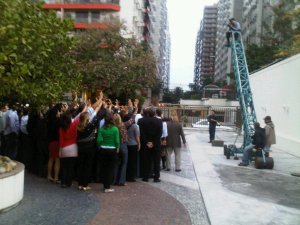 The Rio2016 team poses for a group photo

Our time was up. I headed back to the Copacabana Palace, back to rooftop suite 601. It was already dark but I knew, next morning, I would go out on my balcony and watch the sun come up, to my left, behind Morro do Leme mountain. In front, the pristine sands of Copacabana Beach would, as always, already have runners, and within minutes I would be down there, on a hotel bicycle, to join other fit people on the three-mile-long tarmac circuit between sand and main road that takes you to Forte de Copacabana, whence you can head round to Ipanema. Oh what a life!