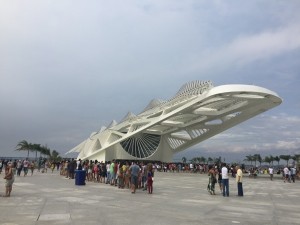 Long lines wait to get into Calatrava’s masterpiece

Only a couple of weeks ago the gal was admiring, yet again, the luxury hotel world’s largest cantilevered support, the 210-foot overhang roof of the three 55-floor blocks of Marina Bay Sands Singapore. And now look at the greatest cantilever of all time, Rio de Janeiro‘s month-old Museum of Tomorrow, Museu do Amanhã, in Praça Mauá. As any lover of modern bridges will guess, the designer is Santiago Calatrava, who says he was inspired by bromeliads in Rio‘s Botanical Gardens, although architectural pundits say it recalls 1960s concrete modernism of Oscar Niemeyer. The $54-million beauty has been funded by the City of Rio de Janeiro, the Roberto Marinho Foundation (part of Globo media group), Banco Santander, BG Project and the Government of Brazil. 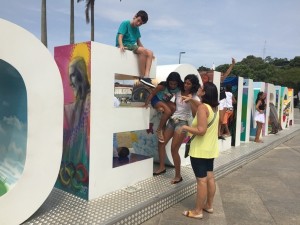 But before you rush off to see it, beware. I had been invited for an internal tour, to see what curator Alberto Oliveira and exhibition designer Ralph Appelbaum currently have displayed within, but when I arrived I found a waiting line of about three hours, snaking even before it got to the official waitline. I had no way of finding my minder, so I left the interior – things like an anthropocene, a scenario in which mankind becomes a geological force – until next time. I took the opportunity to walk around this regenerated area, admiring the big #CUIDADOLIMPICS standing letters, a magnificent selfie, and photo, opportunity for locals and tourists. 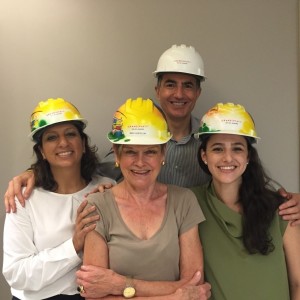 There has never been a better time to visit Brazil, with the exchange rate now around four reals to the US dollar. Especially timed for the Olympics (note that the period August 5-21, 2016, is not a good time to visit, unless you are either taking part, or you are already invited), two significant new hotels are opening, both in the quiet, beach-set Barra de Tijuca area – handy for the private jet airport at Jacarepagua. The ziggurat-shaped 171-room Trump Rio will have seven end suites with private infinity pools on their terraces. I had a hard-hat tour, led by GM Christophe Lorvo, of the 436-room Grand Hyatt Rio de Janeiro, where my favourite was corner suite #771, with views both over the sea and also the mangrove-surrounded inland Lagoa de Marapendi (take the hotel’s shuttle boat a mere seven minutes to the new Gil Hanse-designed Olympics golf course). 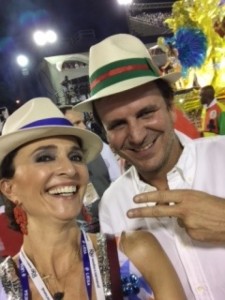 The President of the Convention and Tourist Board, Andrea Natal, with Eduardo Paes, Mayor of Rio

Softly-soothing interiors at this luxury hotel are by Yabu Pushelberg, and yes, there are hints of what the company also did at Park Hyatt New York (here, mini bar cabinets are, however, stunning satin-smooth wood). The Mayor of Rio, who is a driving force in leading the city’s enhancements through the Olympics and beyond, is Eduardo Paes, seen here with the equally determined President of Rio Convention & Visitors Bureau, Andrea Natal – who somehow finds time, too, to head Belmond for Brazil, be GM of the iconic Belmond Copacabana Palace and much more…