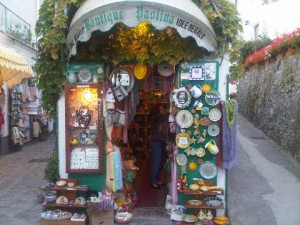 Welcome to superb retail in Ravello, high above the Amalfi Coast

Ravello, a thousand feet above sea level, is not actually a hidden secret.  Richard Wagner came to compose Parsifal here. The centenarian Brazilian architect Oscar Niemeyer came to design and complete a massive auditorium here that has, since 2009, enlivened this Italian hilltop town’s cultural offerings even more (tomorrow, June 16th, 2012, it features Musica Nuda with Petra Magoni and Ferruccio Spinetti).

Gore Vidal lived in Ravello, at La Rondinaia, from 1972 until 2008, and during that time those who visited Vidal and his mate Howard Austen include a couple of Jaggers, Princess Margaret, Paul Newman and Tennessee Williams.

Many of Ravello’s streets are cobbled, stepped and car-free. Some shops, says the gal, are so miniature you wonder if a sumo could even squeeze in. 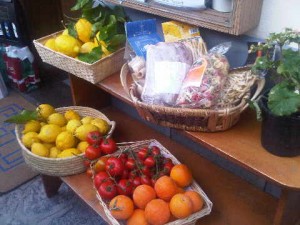 Fruits, home-made breads and pasta, what more does one want?

The shops sell painted ceramics and leather and urgent supplies, necessities like home-made pasta and cheeses, wines and olive oil.  There are fruits galore, so beautiful that anyone coming here from the USA would, even if conditioned only to shopping at Whole Foods, consider that the Ravello produce is dayglo in colour.

Other stores have colourful collections of, say, scarves displayed in such an Italian way that they look absolute perfection (this is what United Colors of Benetton tries to achieve in its mass-market way). 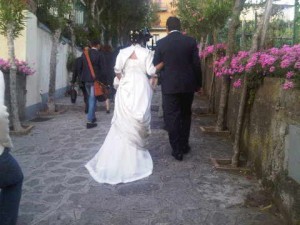 A just-married couple head up the steep steps of Via Richard Wagner ....

Head down, or up, one stepped street leading to, or from, the main square and you see it is named Via Richard Wagner. As it happened one of the groups going up last night was accompanying a bridal party.  They had just married at the main church and were now walking up to their party, which would traditionally be paid for by the groom’s parents.

Never get married on a Tuesday or a Friday in Italy.  They are unlucky days (my good friend Franco Girasoli, who runs the stunning Hotel Caruso Belvedere by Orient-Express, Ravello, says his mother pushed and pushed when she was in labour so that he was born on a Thursday, one minute before midnight). 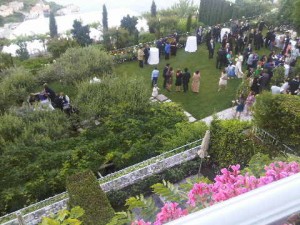 ... to their party, which started on one of the laws of Hotel Caruso Belveder

We too hastened up the stairs, and up to the rear terrace of the Caruso’s amazing lobby.  Looking down from the terrace we could see the party starting down below.  One little bridesmaid, no more than three, carried her white posy up high as, in her full-length white dress, she ran round and round like a non-stop robot, like one of those automatic lawn-cutters but at twice the speed.

The Caruso, named for forefather-owner Pantaleone Caruso whose name actually later helped popularise THE Caruso, is into terraces – as is all Ravello (Vidal’s pad has 20 of them).  The 54-room luxury hotel, a true Leading Hotel of the World, is on so many floors it is almost impossible to find your way immediately so you have to stay the several nights that all desire.

Yes, there are honeymooners here right now, from Japan (and is it true that the Zuckerbergs stayed on their honeymoon immediately following the Facebook IPO?).  There are also lots of well-past-honeymoon Americans who love the peace and quiet here. 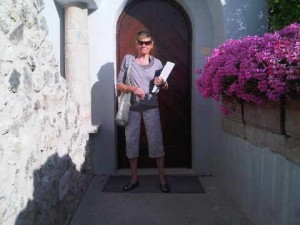 Immediately, one feels in a honeymoon state here.  51 is one of three executive suites formed a year ago out of old ruins.  Outside, it looks rather Hobbit-like, with a wavy concrete roof that echoes with the Niemeyer roof far below. In through the door, you find three side-by-side open-plan rooms, all with white vaulted-ceiling roofs above white plaster walls.

Flooring is big terracotta tiles (some antique, some newly-made from sun-dried clay) with seagrass throw mats.  Beyond the bedroom, to the left as you enter your temporary home, is a big airy bathroom with circular tub. Beyond the four-seat dining area, to the far right as you enter, is a sizeable office annexe with big desk.

Signs of a luxury hotel abound: real linen bedlinens (each bed needs five sets, to allow them to breathe between use); there are European, UK and US sockets; the Kleenex are in silver containers with the hotel logo, there is a choice of three toiletries, and the room fragrance is the hotel’s own Shanghai On The Rocks.  And, as with all Orient-Express hotels (the company was prominent at this year’s ILTM Asia) the bedroom television pops up at your bed’s foot. 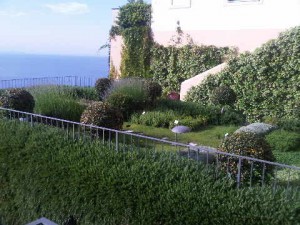 Looking down at the highly-productive herb garden

There are two big private terraces, both large enough for considerable sunbathing and/or dining, looking out at that view. Come out of your main door and look slightly down to your half right, and you see the hotel’s beautiful and highly productive herb garden.

Head down a couple of terraces and turn left for a five-minute walk and hike (up wood stairs) through an orchard abundant with jasmine and you come to the spa house.  Enter this, down more stairs and you find the gym.  More signs of luxury: the gym has several windows, it has lots of space, the equipment is Technogym and the disposable headsets are properly packed stereo sets. 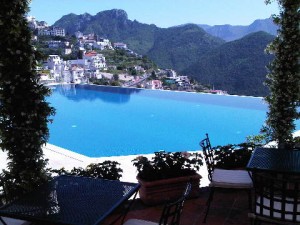 Head up, to the hotel’s signature, the rooftop infinity pool, heated and quiet and totally gorgeous.  Many spend all day long simply recharging, lying around the pool or even more quietly in one of the connecting gardens.

No-one misses the hotel’s boutique, off the main lobby. The room is completely covered in original 18th century frescoes, motifs of which are recreated on stunning chiffon shawls and tops, and cotton dresses, that hang on the beautifully-displayed rails below.  Other guests  take the complimentary shuttle down to Amalfi (for designer shopping and the cathedral, of which more anon), and perhaps on to Positano, or take a sail on the hotel’s 45-foot boat.   Interestingly, this is a great way to meet people, no not the honeymooners but, in one case, friends of an aforementioned honeymooner’s father… on a simple shuttle down the conversation ranged from Beirut to Oxford and T.E. Lawrence.  These are the kind of people who know that Hotel Caruso is perfect for them. 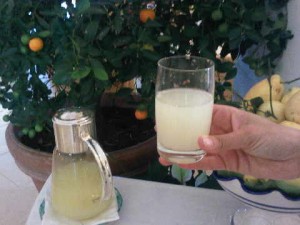 A welcome glass of fresh lemonade, in front of a fruitful orange tree in the hotel's main lobby

We had been welcomed on arrival with a glass of fresh lemonade.  And now, says the gal, this is all very well, but haven’t we come to Italy for the food?  Read on.