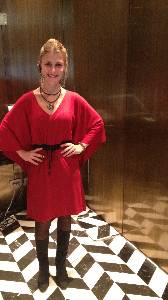 There are uniforms and uniforms.  Grey invariably makes the wearer look unhappy and unhealthy, especially in cold climates.  When what is now the luxury hotel Grand Hyatt Melbourne opened (it was at that time ‘Hyatt on Collins’) they asked a big name to design work gear, which included stunning single blocks of colour, brightest gentian blue, black and white.

Now the re-done Four Seasons Buenos Aires has come up with the most amazing ‘employee fashion’, exclusive by local designer Nathalie Corcias.

The man accompanying the gal on her visit to this eternally-young hotel said the hostesses’ flowing gowns in Elena restaurant were the most beautiful work attire he had ever seen. 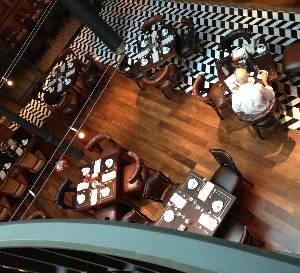 Looking down, from its gallery, at Elena restaurant

Elena, the restaurant, is named for Elena Peña. When she married Felix de Alzaga Unzue in 1920, her bridegroom built her a mansion in Louis XIII style. This is part of the hotel, which now has a 12-floor tower about 30 yards away.

Last month, November 2012, Elena restaurant opened.  It is two floors high, with a giant circular glass dome in the roof. From the upper gallery, which has glass-walled wine stores as well as extra seating, you can look down at the main floor, which has black and white tiled, and wood, floors, and wood tables and heavy leather chairs.  This is gaucho and polo land and the hotel’s owner deliberately wants to theme his hotel as such. 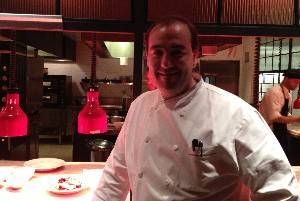 The chef in front of his open kitchen

The chef, Juan Gaffuri, is a Buenos Aires boy who used to be an electrician. He presides over Elena restaurant, and the neighbouring Pony Line gaucho bar (it has a Gucci-type strap ceiling, and seating booths are like stable stalls).

Interestingly, you are encouraged to walk from the bar, where you might have had a Dirty & Smokey Martini (Bombay Sapphire, Cinzano, Talisker, brine, flamed orange zest) to the restaurant via the kitchen.

All the cooking is done in front of the customers, and the kitchen counter’s scarlet heat lamps, pulled down when necessary, add to the flair of the place. 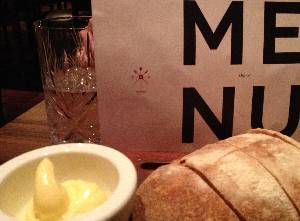 The paper-sheet menu is called just that, MENU

Menus are imaginative. Take a wood rod about two feet long, hang from it paper sheets.   In case there is any confusion, the front of the sheets is simply marked MENU (the restaurant is very good at telling you what is what – the linen napkins are embroidered with the word Elena).

This is simply good eating, as the locals know.  The restaurant was packed that night, and I am sure none of the other diners was staying in the hotel.  We drank an Argentinian wine, Ramanegra Reserva 2010 Casa Rena malbec, and I tried to work out whether to go for Dry-aged, or Angus, or Argentinian kobe-style beef.  When in Argentina, eat what the locals eat… 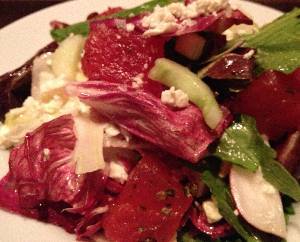 It is a bit of a challenge, in some places, for vegetarians to eat well in carnivore land but Four Seasons has that well in hand. Here you could easily exist on lots of side dishes, including truffled corn soufflé, which comes in a cute little cast-iron cocotte that matches the iron work of the restaurant’s upper gallery, the 21-step spiral staircase leading up to it, and an old-fashioned hoist to take cases of wine up and down.

You can also choose from the main menu, say, a salad of red radicchio, red watermelon, red-skinned radish, baby tomatoes, and some arugula for good measure. 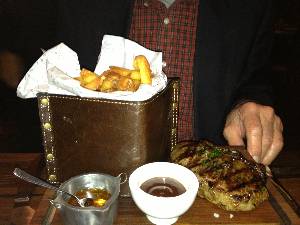 .. can be followed by a steak and fries

My man’s ribeye came on a hearty wood platter, and he was brought a steak knife – labelled Elena – that had one of the heaviest wood handles imaginable.  This is no mimsy-pansy place.

This is serious gaucho, the kind of venue that Argentina’s top polo stars are going to adore (many of them were here for the hotel’s new-look party a couple of weeks ago, when food and wine went with arias from stars of Buenos Aires opera house).  Even the fries are serious here, at this luxury hotel: they come, paper-wrapped, in a large tin can.  This place means business, with style.