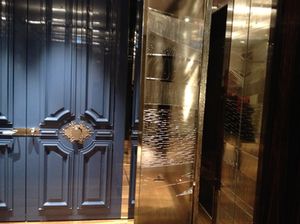 This is a pretty incredible door.  Each half weighs 300 kilos, and the metal fittings are Christofle, as is the section of wall to the right of the photo.  This is the top floor lobby of the 18-floor InterContinental Geneva, which in its 49 years has evolved from a serious 20th century business hotel (it is across the road from the United Nations’ Europe headquarters) to a 21st century business hotel to its current incarnation, a sensible and utterly comfortable business hotel that also has the right to call itself a sensational luxury hotel.  This is certainly true, says the gal, if you staying in the top-floor Residence. 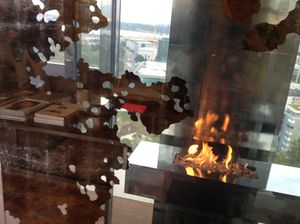 The Residence stretches over 6,200 sq feet and it cost eight million – Swiss francs – to fit out.  Tony Chi, the designer of Park Hyatt Shanghai, has redone the whole of this 333-room hotel, which now includes the Residence.  Whatever his budget, it was always enough to include lots of Christofle (the hotel’s owner happens to be a big shareholder). Think also Bernardaud, the only china used anywhere here, and Riedel, although only used for best-red wine glasses. Once through that blue outer door you see, to your left and right, two pairs of lime-yellow doors just like the blue one: look straight ahead and you have three matching pairs of lime-yellow doors.  These lead to the Grand Salon. 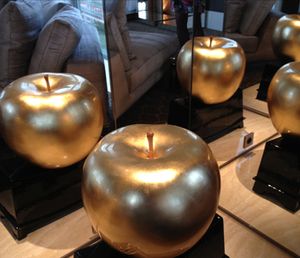 The Residence is two wings (one bedroom each), and a shared Grand Salon, which has a floor-set gas injection fire with glass surround.  Look through the glass and down the hill, down to Lake Leman about three-quarters of a mile south. The Grand Salon has a U-shaped sit-up bar, and lovely seating and art works that include a display of big gold apples (you know they must be real-gold).  I look at the two Residence wings.  They are near-identical, apart from the fact that West has a gym (Technogym) while East has a private spa room. They both have a squash-court-sized main reception room, with rectangular tables with eight red leather chairs: they have Miele kitchens, one and half bathrooms, two gigantic closets… 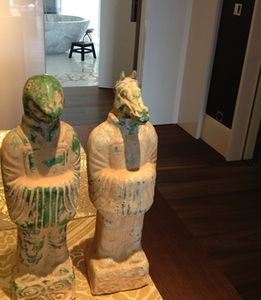 One of the pairs of Chinese figurines holds court

And everywhere there is the kind of art you might have in your own ‘residence’, if your name was Carlos Slim or one of those Russian oligarchs.  In the bigger of the two closets – size about 12 by 12 feet – one of the many pairs of Chinese human-dressed animal sculptures looks north towards the main bathroom.  And oh that bathroom, it is heavenly. Its heated marble floor is inset with delicate tree-shaped patterns (actually wood is the theme throughout the hotel, and even its restaurant, with real leaves forming one entire wall decoration is called Woods).

There are two double-sized showers, both completely marble: one is the steam hammam next to the spa – they bring someone up from the big Clarins spa down in the main hotel to do whatever. 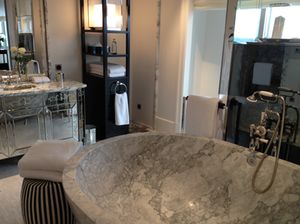 The bathtub, with amazing views north to the mountains

The tub itself is round marble, the kind of tub you feel you could immerse in for ages, as long as you have a bottle of Taittinger, the hotel’s house Champagne, by you, with a Riedel flute, of course.  I muse that downstairs, in the main bar, they cleverly have a cocktail list that goes by history.  Did I know that Daiquiri first appeared in 1898?  No.  Do I want to know?  Probably.  But will I forget that? Certainly.  I will also forget the Aviation, invented in 1916 during WWI, when someone first blended Bombay gin with marasquin liqueur and liqueur de violette. 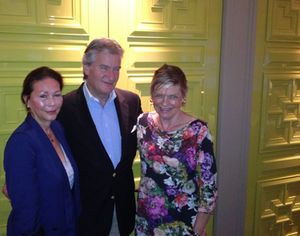 In front of one of the five (total) yellow double-doors, Barbara and Jurgen Baumhoff

The interesting thing is that although the outside of this hotel is still unmemorable – one of those shoebox types of buildings that were popping up in major German cities in the 1960s and 1970s and one somehow happened here in Switzerland – the interior is now stunning.  Just as Tony Chi worked such wonders at Park Hyatt Shanghai, so he has turned this into a 21st century luxury hotel.  As the big boss, Jurgen Baumhoff says, running it is his passion, and he is always thinking of ways to make it even better (it is rumoured he will be adding a fumoir shortly). He also brings onboard a highly-talented major domo, Olivier Denavailles, to look after Residents of the Residence.