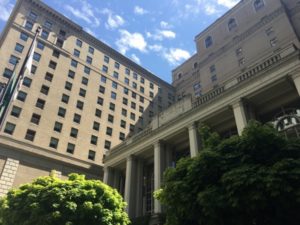 The gal has always been drawn to Rem Koolhaas’ architectural designs and what he has done for Seattle’s Central Library is mind-boggling. As if a free-standing glass origami, it soars 11 floors, or 185 feet high, and inside you move from one level to another by bright dayglo yellow-green escalators, some with inset moving conceptual art to one side (see above). After the library opened, May 2004, it had over two million visitors in the first year. As though illustrating ancient and modern, this 21st-century wonder is five minutes’ walk from Seattle’s luxury hotel icon, the Fairmont Olympic. This opened, says the gal, in 1924, when it had 750 rooms: by the time it was branded as Four Seasons, in 1982, the count was down to 450 rooms – it became Fairmont on August 1st 2003. 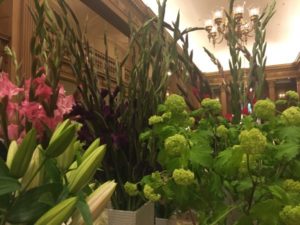 The two-floor lobby is an exquisite testimony to the original architect, George Post, who was told to do something in Italian Renaissance style (try and change it today and the local business types who call this their professional meeting place would be livid). Upper floors and bedrooms, however, have just been renovated, with absolutely gorgeous results. Thanks to designers from DiNapoli Capital, who have a small ownership share, gone are the florals and stripes of yesterday and in are currently-trendy soft greys and lavenders, as if to soothe after what has perhaps been a fraught meeting. It is a very well thought-out hotel, with an indoor pool, overlooked by a good Technogym with good fruit, and the charming young attendant may well even open it just ahead of the stated 5 a.m. start. 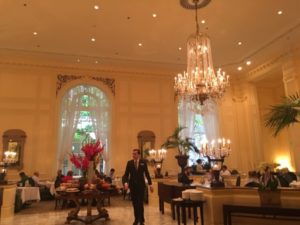 The lowest-level spa, by the way, cleverly lists on its outside door which products it uses, an array that includes Biologique Récherché as well as the Hungarian Omorovicza (do they offer an Omorovicza cocktail, as is now found in one enterprising hotel in Budapest?). I had actually arrived at the lowest-level entrance, on University Street, to be met by two managers who claimed they honestly had only been there two minutes. Whatever, that was really impressive. Yes, says the hotel’s German-born GM Markus Treppenhauer, we may not be the youngest place in town but we do service. That is obviously one reason why so many locals flock for breakfast, daily, in the Georgian Room. 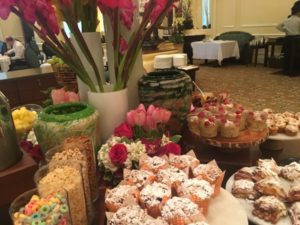 This is an exquisite space, two floors high, with two massive classic chandeliers and moulded panel walls that in all use 11 different shades of pale yellow. The breakfast buffet is a particular pride of the GM – we had a good discussion on how important it is to give customers choice at breakfast and buffets, at least offering cold components, do provide that. Lunch, apparently, is à la carte: the restaurant closes in the evenings, when those who want to stay in can choose oysters-and-more in the appropriately-named Shuckers. As I left this very comfortable and friendly luxury hotel one of my arrival managers appeared, as if by magic. Had I had a good time? On my way out, back to the Link rail to the airport, a veteran doorman said ‘so soon? You have only just arrived’. NOW SEE, BELOW,  THE ROOM I WAS LEAVING BEHIND