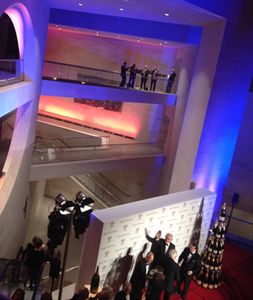 DHM, with President Gombert to the left of the Moët ‘tree’

Earlier this week – on Tuesday November 19th 2013, to be precise – a unique event took place.  A French president was ‘crowned’ in Germany.  The president in question is Philippe Gombert, who owns a luxury Dordogne hotel, Lacave Château de la Treyne, a member of the Relais & Châteaux association.  And he is now head of that 515-hotel association, which held its annual meeting in Berlin.  The events culminated in a 1920s extravaganza at Berlin’s German Historical Museum, Deutsches Historisches Museum (usually known as DHM).  Its extension, designed by I.M. Pei, was unveiled by the Chancellor, Angela Merkel, and it is a brilliant venue for soirées, says the gal. As the photo shows, its multi-levels allow, as in this case, for guests to arrive, be greeted by the president and his court, and rise up stone steps to a mezzanine, to look down at the view, and look up at the welcoming jazz band. 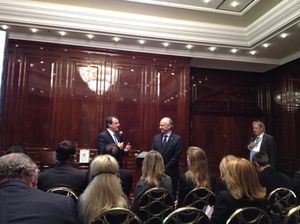 Philippe Gombert is taking over from Jaume Tapies, who during his eight- year regnum brilliantly steered Relais & Châteux through the economic downturn and other crises (Tapies has not yet revealed what he is going to do next, watch this space). At an earlier press conference, Philippe Gombert, on left, and Jaume Tapies spoke in French, simultaneously translated, right on the spot, by someone who also spoke fluent German.  It was mesmerising to watch this guy.  He waved his arms around to such a degree I wondered if he was Italian.  Philippe Gombert had campaigned with his ‘court’ already announced, and he introduced them – his successor as Secretary-General is Olivia Le Calvez, wife of the Didier Le Calvez (she owns and runs hotels in her own right). 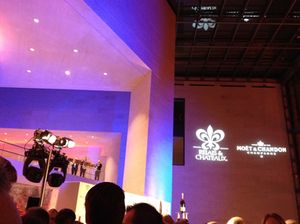 For the first time, his court, now the official board, includes an Asian representative, Delhi-based Sujan MD, Jaisal Singh.  He is a real gentleman, as I discovered later.  He was sitting in front of me on a flight to London and he turned round to check before putting his seat back – when did that last happen?  Last century.  There were so many good friends among the 622  at the Relais event. Raymond Blanc had left Le Manoir aux Quat’Saisons to spend his birthday here with us in Berlin. Michel Roux’s wife Robyn won one of my best fashion prizes for her flapper-style hair cage, like strung-pearl lampshade fringes. 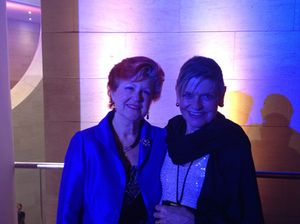 Another of my personal fashion awards went to the wife of Ralf Kutzner, who runs Bülow Palais in Dresden – she had a headpiece that could tickle a giraffe.  Annie Feolde, who runs the Enoteca Pinchiorri restaurants in Florence and Tokyo, decided not to ‘flap’ – her flame hair, which looks somewhat discoloured in the blue light at DHM, is distinctive enough anyway. She heads the Italian national branch of Relais & Châteaux – the UK branch is run by Malcolm Lewis, owner of Longueville Manor on Jersey. Andrew Stembridge, who heads both Chewton Glen and Cliveden, a new member of Relais, is in charge of marketing for the whole world. 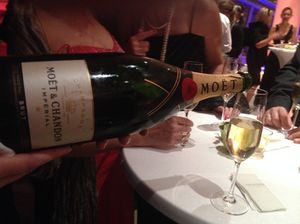 He will be doing a stellar job, I am sure, of pushing the association’s gift cards, stylishly packaged in white boxes with distinctive coloured ribbons. This year’s best luxury Christmas gift has got to be such a ‘card’, offering one of the total 2,800 experiences available at over 380 hotels. The giant LVMH must be hoping that everyone at the gala will be giving, if not drinking, lots of Moët this Christmas – the evening was, indeed, themed the Moët Hennessy Gala Dinner. Now imagine, if you can, having to work backstage at the dinner, producing multiple courses each of over 600 exquisite gourmet dishes for hoteliers and other chefs. Surely there must have been nerves galore, and pandemonium? Every course, cooked by a different ‘grand chef’, came with Champagne. 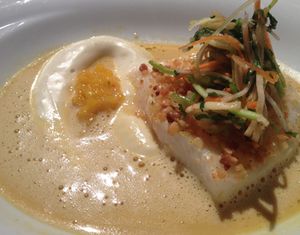 Here, for the record, is a simplified menu: Char by chef Thomas Kellermann, Hotel Burg Wernberg, with Moët & Chandon Grand Vintage 1992; Foie gras platter by Claus-Peter Lumpp, Hotel Bareiss, same Champagne; Halibut Asian-style by Harald Wohlfahrt, Restaurant Schwarzwaldstube, with Moët & Chandon Grand Vintage 2002; Venison by Martin Herrmann, Hotel Dollenberg, with Moët & Chandon Grand Vintage Rosé 2003; Banana milk shake – I will give the whole description – with coriander, kaffir lime and caramelised Valrhona chocolate, by Thomas Bühner and René Frank, Restaurant La Vie, with Hennessy XO. And after that, dear reader, all I wanted was to walk back to the luxury Ritz-Carlton Berlin hotel that was main host throughout the whole congress, but it was dark, and I had shoes that were in no way meant for walkin’…