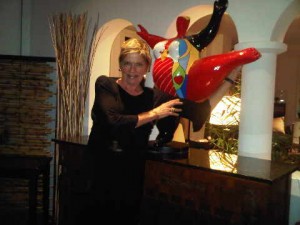 A colourful statue in La Samanna’s lobby is a miniature of the one in the rear lobby of the Negresco, Nice

Luxury, wherever you are, is a big open-space shower ‘room’ with easy-work controls that instantly give water at your required temperature.  The gal needs shampoo, conditioner and shower gel that are easy to identify, and simple to open.

There are other things that speak LUXURY.  Here are just a few. Easy-work electric and air-conditioning switches, ample lighting, a big desk with Europe-UK-US sockets (sorry, Australians and South Africans, you will need adaptors).. and so on. La Samanna, on St Martin, has all those.

It also has art, lots of it. In the lobby is a dancing woman, a pint-sized version of the one at the rear of Negresco in Nice. And it has flowers, a-plenty.  What would James Frankel, who started this luxury resort way back in 1971, think?  He named it, by the way, after his daughters, SAMantha, ANouk and NAthalie. 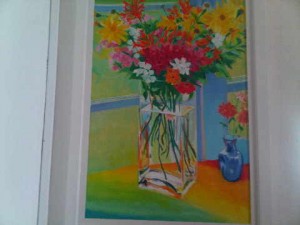 There are hundreds of paintings around the luxury resort…

B-15, upstairs in the two-floor Bougainvillea block, was, admittedly, only redecorated in 2011. The 83-room luxury resort is closed by its owners, Orient-Express, every September and October.  Just as humans need to take regular stock to keep themselves going, so hotels need continual refreshing (think of airlines – planes are taken out of action for detailed checking of equipment, and even stripping down to bare essentials).

Last year rooms were redone by Project3sixty, one of whose principals, Christiane Sattler, was with Four Seasons for ages. She says here the idea was to create an elegant, sophisticated yet comfortable space that did not feel like a hotel room. This is, rather, a home by the beach, with whitewashed oak, Oly mother-of-pearl mirrors, driftwood table bases, bed cushions by Aviva Stanoff and watercolours by French artist Antoine Chapon, who now lives on the island. 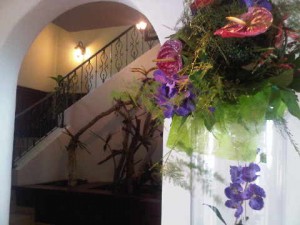 .. and real flowers, too, here also in the lobby

No two bedrooms are alike – which means presumably some of the 35 percent of regular guests always want ‘their’ room. This year, La Samanna’s closing will see the restaurant, La Réserve, moved lock stock and barrel a few metres towards the upper of the two pools.

The bar, an eccentric haven hung with Indian fabrics, will relocate in the opposite direction, and they will be able to add a new bistro.  At the moment, at peak times you can only dine at La Réserve, the only restaurant, at one of two set sittings, which, as one knows from cruising, implies middle- rather than high-class.  But luxury is also knowing what can be made better. 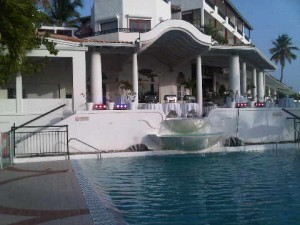 The upper pool is adjacent to what is now the bar, which will be relocated this September

La Samanna, run by GM Pascal Deyrolle, has a team that rises to 200 at those peak times. The employee notice board is posted, fully transparent, for any guest who cares, to read and study. You know which team members this month celebrate their 22nd anniversary at the hotel, and which have birthdays and so on.

You also see honest comments from previous guests, solicited via an outside customer management system.  Were someone to ask me, there would be top marks for so many people.  The night manager who called me personally at four o’clock for early wake-up (yes, requested), and he who brought a perfect continental breakfast at five, and came back for the trusty suitcase  50 minutes later, and buggied us both up to the main building, and made sure the six o’clock car awaited. 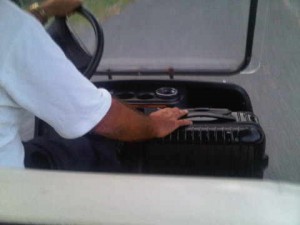 After serving an 0500 in-room breakfast, the night manager drove the Porsche Rimowa – one hand used, to hold it steady – up to the main building, to go on to the airport

And Monica.  Some might say ‘words cannot express’ but a writer knows that words must suffice. Sometimes watching BBC World on an elliptical’s small television set is so unattractive that it is better just to listen…

Monica is one of the concierges. She is quick, alert, personal and even takes magnificent photographs.  She and her colleagues make sure that even at six in the morning there are stacks of at least six different-nation satellited newspapers, today’s, in neat piles, each held down by a big white stone.

Actually since 90 percent of the guests here are from the US, sometimes only the American paper (the NYT’s daily Digest) is needed.  Some of these Americans sensibly stay a long time here.  Others are transitting, en route to St Barth’s for its Disney-meets-Hollywood appeal. 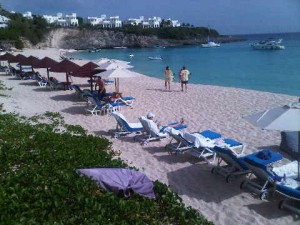 St Martin, the French side and ‘neater’ side of the joint Dutch-French island that also houses St Maarten, is not as Disney-Hollywood as St Barth’s, but neither is it as untidily rustic as some other Caribbean islands.  It is easy to understand why to many it is ‘perfect’.

My new friend Charles de Ressguier was working for Groupe Barrière in Deauville when he got a phone call from a headhunter who wanted to put him forward for a job in the Caribbean.  Where?  La Samanna. He took it, property and financial package unseen.  The only other two ‘luxury brands’ that would similarly have been immediate catches, he says, are The Connaught in London and Mandarin Oriental Barcelona, with perhaps Burj Al Arab as a third alternative. 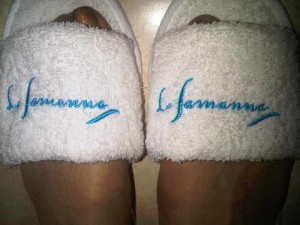 La Samanna, by the way, has so much that other Caribbean places offer, beaches and sea and so on.  It also has an outstanding gym and boutique, and, like its sister Orient-Express hotel, La Residencia on Mallorca, a resident artist.  Here local artist Roland Richardson, known for his ‘plein air’ art and drawings, is heavily featured, and he does weekly Wednesday morning master classes.

He it was who designed the signature fish outline that appears on some of La Samanna’s blue-edged china (wonder who designed the hotel’s simple logo?). Despite prior misgivings, I am beginning to think that luxury and the Caribbean can be compatible, after all.