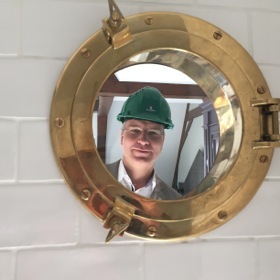 Some might say that the charming Alex van Gastel is a disrupter in that he does things differently. As GM of Hotel Pulitzer Amsterdam, he is peering, here, through a porthole between bedroom and bathroom in one of the luxury hotel’s rooms currently being renovated by Jacu Strauss. But, says the gal, the hotel has always been different, from the days 45 years ago when Peter Pulitzer, grandson of THE Pulitzer, Herbert Pulitzer of the prize, was asked by KLM to devise a luxury hotel that would bring more high-spending visitors to Amsterdam. He accordingly managed to buy ten historic adjacent warehouses on Prinsengracht, and opened, of all things, a Howard Johnson – sensibly renamed a year later as The Pulitzer. Mr M later grew his acquisitions to a total of 25 old buildings, many on the parallel Keizersgracht canal. 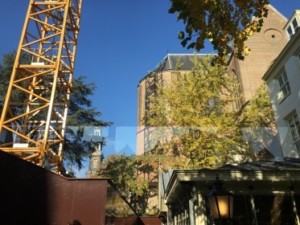 The garden as it is now

Ergo, stay in what, when all renovations are finished, will be a 225-room hotel and you have a choice of canals – looking over Prinsengracht, with the hotel’s private landing dock, or Keizersgracht or face in to what will be a charming and spacious urban-resort garden, with a to-come two-floor fitness building. Yes, there is considerable disruption, right now, for the many conservative residents who live around, but Alex van Gastel has formed a neighbour committee to empathise with those inhabitants. And another kind of disruption: this April, the Pulitzer separated from the safety of Starwood, its brand support and management, after 20 years. But, he says, thank goodness the Pulitzer instantly became part of Preferred, which is helping tremendously, particularly with the growing South American market. 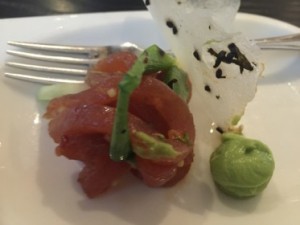 As of now, the entire Keizersgracht block is in maximum hard-hat mode. Come January 2016, those rooms will begin to be operating again, and the other, Prinsengracht, block, will close (with a temporary reception welcome area in Keizersgracht). The new Keizersgracht-set restaurant will be revealed November 11th, 2016, but until it actually opens, in January, there is a highly enjoyable all-day pop-up restaurant. We sat at a high-up table right in the lobby, which apparently, when redone, will look like a warehouse, with wood floor and heavy wood beams as part of the one-floor-high ceiling. Before my requested salad, I was brought an absolutely yummy amuse, a taster of tuna tartare with a wasabi cream, and a paper-thin wafer with encrusted seeds. 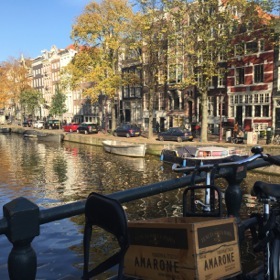 The new-look hotel, says Alex van Gastel, will have a feature that I suspect we will see in more and more luxury hotels – four themed apartments, at ground floor with their own street-side doors. The one that especially excites me is the Book Collector’s Suite, with over 900 real books, some cleverly displayed on a L-shaped, wall-set rack that literally goes up one side of a door, and over it. After lunch, I walked back along the canals, dug by the city in 1613, and mused what difference there may be now that the entire Amsterdam Canal District is a UNESCO World Heritage Site. Next time in Amsterdam, I must take one of The Pulitzer concierge’s guided walking tours, every Wednesday and Saturday morning, to find out more.