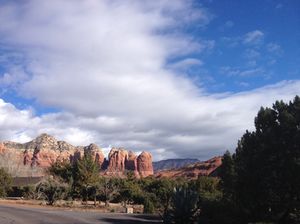 Drive to Sedona and its characteristic red earth

Two hours’ drive north from Phoenix you are not only at well over 4,000 feet above sea level but in another land.  The trip takes you through a living panorama of soft green veldt like east Africa when it has rained, and sometimes forests of centuries-old cactus like nothing else, anywhere.  The gal is off to see luxury resorts in Sedona, one of the fast-growing adventure and New Age destinations in the global traveller’s must-see list.  What is she going to find?  Get into the Sedona environs proper and you know you are arriving as the earth is rust-red with iron oxides. 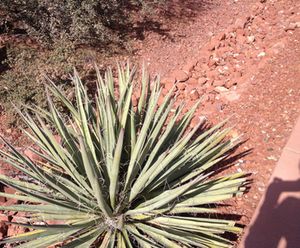 No flowers, but a myriad cactus

Ah Sedona, named after Sedona Schnebly, the wife of one T.C. (Carl) Schnebly, obviously an organising kinda-guy.  Sedona had been home to settlers since Jim Thompson, no not the silk one, had arrived in 1876 (see Hoyt Johnson’s The Sedona Story: Settlement to Centennial).  But the area had no name and the post office would not deliver while it was anonymous.  OK said Mr Schnebly, you, my dear wife, will have a town in your honour.  She joined the regal ranks of Adelaide and Victoria, who have cities as well as islands, in the case of the latter, named after her.  Anyway, I loved Sedona.  I do not think I saw any flowers but I saw lots of different cactus varieties. 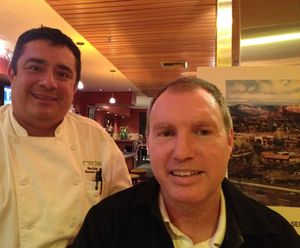 Sedona Rouge is the friendly hotel in West Sedona, right on the main 89-A artery running north to Flagstaff and on to the Grand Canyon.  It belongs to four friends, led by Jim Apple, who sold a shopping centre in Napa and put their money, and faith, here.  Key to the 72-room hotel’s success is not only its location, with masses of free parking around and a shopping centre next door, but the amazingly versatile GM, Ed Conway, a Russian-speaking ice-hockey player who knows how to be a marvellous Mine Host.  He has brought in an equally affable chef, Ron Moler (whose wife is a wedding planner but that is another story, though it is clearly convenient as the hotel has its own wedding garden). 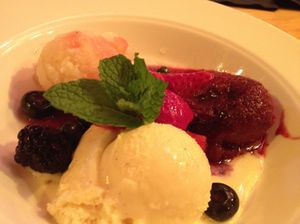 REDS, the all-day restaurant, is evidently the top meeting place in this area of Sedona.  Locals come for Ron’s food, organic versions of local comfort foods, and lovely wines, include such Arizona labels as Stage Stop Vineyards Red Barn, from the Peznick family in Yavapai County.  Arizona’s best-known local winemaker is Eric Glomski, at Page Spring Cellars, but the state’s wines have been publicised nationally by M.J.K. (Maynard James Keenan), lead singer of Tool, who owns the Cadaceus, Merkin and most of the Stronghold labels, plus he has an organic produce store in Cornville, 15 minutes’ drive south of Sedona.  This is entertainment land.  Top guests at this year’s annual Sedona Film Festival, February 20-March 3, 2014, is Susan Sarandon. 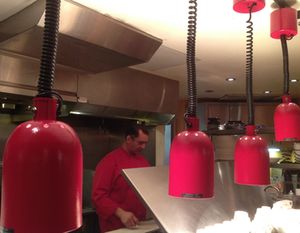 Year round, REDS has local music, not Tool obviously, performing every evening, so locals come in, to sit in its lounge area or up at the two communal tables, and see who is playing tonight.   There are red napkins and red lampshades over and, in the morning, the breakfast chefs wear red ‘whites’ (even the housekeeping trolleys, on the corridors of the three-floor hotel, have red pouches for holding necessities).  I wondered what colour my egg would be but no, it was not red.  I did take a good hike up the adjacent Rodeo, road not drive, and marvelled at the soil’s colour.  I passed one of the 5,000 local residents, wearing a scarlet baseball cap.  Where’re you from?  He asked.  Welcome. 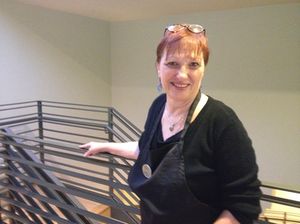 Kim, head therapist in the luxury hotel’s lovely spa, was not wearing red, though her hair had hints of red in it.  Her demeanour definitely had hints of New Age – as someone says, everywhere else in the world therapists are in their twenties but in Sedona they are mostly 40 or so, drawn by the mystical magic of Mrs Schnebly’s area.  Thank you for coming, said Kim, almost chemically infusing me with goodness as she gave me some emerginC samples (will I ever have time to use them?).  I headed up to the hotel’s rooftop viewing platform, looked over the swimming pool and wedding garden, and the spot where the owners and Ed Conway are going to build an additional 36 rooms, to the strategic Thunder Mountain beyond.  It is certainly magical.