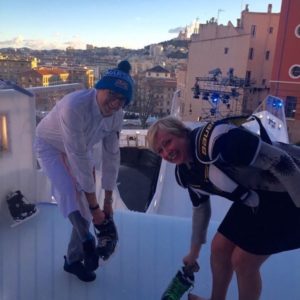 Taking part in this amazing race this January were, as shown above, Dutch GM Madelijn Vervoord and her Michelin-starred chef, Lionel Lévy.  The 194-room luxury hotel has seen many extraordinary happenings since it started life as a shelter for the sick and poor back in the 12th century, and later it was the setting for the first-ever cataract operation by Jacques Daniel. Now, owned by AXA Insurance, it is one of France’s most highly-respected and glorious hotels, and its success is such that more meeting rooms are being added – those conventioneers obviously appreciate the fact that they have two dining choices here, both overseen by Lionel Lévy.  The Red Bull Crashed Ice event here kicked off the 2017 European Year of Sport Programme.  The first time the event has ever been held in France, contestant hurtled down to the finish line at the Vieux Port.

But it was all in a day’s work for the Madelijn Vervoord and Lionel Lévy team.  THIS week the pair was in Berlin at the superb IHG Europe Conference 2017.  At the culinary evening, Lionel Lévy, with three helpers, was one of IHG’s eight Michelin-starred culinarians cooking for over 600 delegates: his Alcyone menu was Bouillabaisse milkshake, and Zucchini cannelloni stuffed with eggplant. The evening’s Champagne was sponsored by Laurent-Perrier.