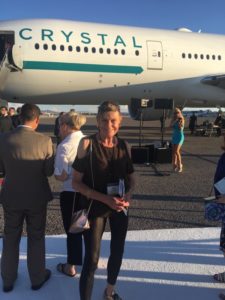 Welcome to Las Vegas, in the form of a plane, and not just any plane but Crystal Skye, christened last Saturday, August 12th, 2017, at Las Vegas International Airport – and among the 88 honoured guests was the gal, no less. Why were there 88? Well, the transformed Boeing 777-200LR, which stands for Long Range – has 88 seats, all not only super-comfy with 24-in video screens, but all lie fully-flat, 180°, to make proper beds. These will certainly be needed for longer flights. This plane has a nonstop range of an incredible 19 hours. Hey, InterContinental London Park Lane RVP/GM Alvaro Rey can send guests off to a sister luxury hotel, InterContinental Sydney, where they would be welcomed by his counterpart, Jürg Boeckeler. The lucky guests had to present passports but no usual plane-type security, though Crystal apparently went through a hurdle race obtaining permission to get everything, and everybody, airside. We were greeted by the word’s most striking violinist, above, size zero-zero, six-inch heels, who fiddled away in over 100 degrees and also managed a ground-set keyboard with one foot, all the time in a turquoise wrap that exactly matched the plane’s livery. 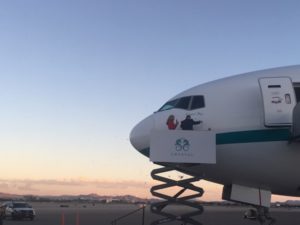 They rose to the nose…

Crystal, incidentally is very strong on music: President and CEO Edie Rodriguez has just announced soprano Anna-Maria Kaufman as godmother of the Crystal Bach river cruiser, to be christened on the Rhine this very day, August 20th, 2017. Crystal Skye, however, has a godfather, in the form of Matthew Upchurch, Chairman and CEO of the mighty travel advisor consortium Virtuoso. He was hugely excited, he said, as he and Edie Rodriguuez, strikingly dressed in bright scarlet, were silently elevated in a hydraulic lift to shatter a bottle of bubbly – in fact bubbly water – against the nose of the plane. I was standing next to the talented engineer Jon Buccola, whose Seattle-based company Greenpoint Technologies, had fitted out the plane, and helped Edie Rodriguez design it. (Jon Buccola, a one-time Boeing engineer, has designed and fitted out private planes, it seems, for half the world’s potentates – he even revealed that one South American President had a barber chair on his official plane.) 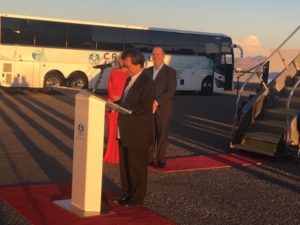 And the Chairman spoke

Crystal is owned by Genting, whose Malaysian Chairman and CEO Tan Sri Lim Kok also made a speech, and then everyone was invited, in groups determined by their ‘boarding passes’. We climbed up the steps and entered this divine champagne-hued interior, with some pale blue carpet streaks and soft purple lighting. As well as the main 88 seats there is a standup bar in front, with a wall of fine wines. Next comes a lounge, with four fixed tables which will each seat up to 12, say for playing cards, or for dining. There is, of course, a full-time a crew who have to be prepared to do long long hauls. Passengers will be looked after well – the washrooms, by the way, are stunning, with Etro toiletries, just like many luxury hotels. The Captain comes from Emirates and the onboard chef, François VanZyl, a South, from Etihad. 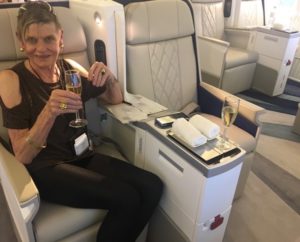 I am sure the food will be stunning. This last Monday, August 14th, 2017, Crystal, the cruise line, won Virtuoso’s coveted ‘best culinary experience’ award at the annual Virtuoso Destinations Dinner. Edie Rodriguez, this time in a black top and full-length emerald skirt, bounced up on the stage to accept the award in front of over 2,000, and admitted she loves to eat but she does not exactly cook: ‘I asked my husband to take me somewhere I had never been before and he took me to the kitchen.