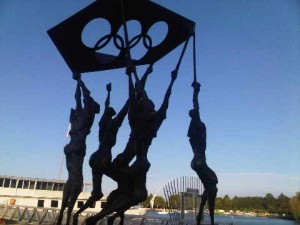 Statue at the lower entrance of the Olympic Park, Lausanne

After the exhilarating unbelievable sight of the now most famous living Englishman WIN the Tour de France, most – but not all – eyes are now turned to the Olympics.  And the best part of the Olympics, says the gal, is right here in the Ouchy part of Lausanne, at the Parque Olympique (Olympic Park).

The gardens themselves are free, and not surprisingly even at seven this morning there were oodles of Chinese taking photos.  The sculptures are brilliant. Someone said Botero and Rodin are present but I did not see them, or rather their incredibly valuable creations. 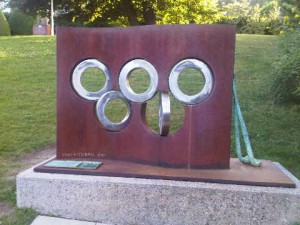 But here are the five Olympic rings, one slightly skew-whiff, with a bronze hockey stick at the end of the hole – this is Drapeau Olympique, by Emilio Armengol. Here is a ten-foot high white sculpture of a foot skeleton – Born Fast, by the Korean Hungkoo Lee.

There are bronzes of runners Paavo Nurmi, by fellow Finn, Wäïnö Aaltonen, and Emil Zatopek, by Jaroslav Broz, from Prague. A white sail (La Vela) is by Francesco Cremoni, a big door shape (L’Homme Volant) is by Jean-Michel Folon and, a big favourite, a trio of cyclists (Olympia 93) is by Gabor Mihaly. 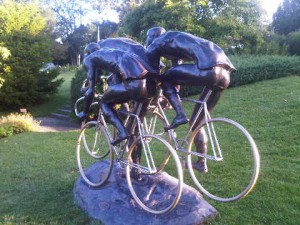 There is also a museum, open Tuesdays through Sunday 1100-1730. It was founded 1993 on the initiative of Juan Samaranch, then head of the International Olympics Committee IOC – and, two years later, the design, seen through by architect Pedro Ramirez Vazquez, fortunately representing Mexico on the Committee, was deemed European Museum of the Year.  There will be some who are giving up on the idea of heading for the hullabaloo that is London 2012 to stay stress-free here, in Lausanne. 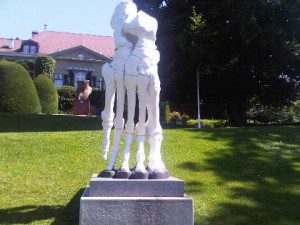 On that day he was at Rütli meadow in nearby Seelisberg for what became known as his Rütlirapport speech, telling his commanding officers never to surrender. Every August 1st, Swiss National Day has a hike that starts at Rütli.

(Speaking of never giving up, what is not generally known is that although fire has been associated with the Olympics from time immemorial, it was the Nazis in 1936, at the Berlin Olympics, who, under Goebbels, added the torch relay that, for London 2012, has been metaphorically hijacked by unhealthy sponsors of the calibre of Coca-Cola and McDonald’s.) 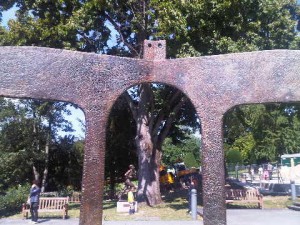 Stay at the luxury Chateau d’Ouchy hotel and the card wallet that holds your room key gives you free access to the Olympics Museum, plus free local transport (London, match that!).

This is one of the most sensual smaller hotels on the luxury circuit anywhere. It looks so welcoming, with bright red geraniums on the outside ledges of all windows.

The original tower goes back at least to 1647 (USA, match that!) and the old and such new features as steel and all-glass conservatories linking surviving buildings, coupled with legendary Swiss workmanship, gives an unbeatable quality product.

As comparison, it does have a little of Amsterdam’s Conservatorium about it, but that is not right lake-side, with regular toot-toot of ferries leaving for Geneva and Vevey and elsewhere around Lac Leman. 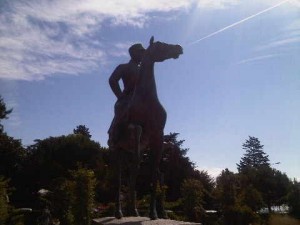 There is also a hint of the Riviera, with an outdoor terrace that is part of the local community. The steeply-sloped tiled roofs could be Disney, but this is all real. It is a unique amalgam.

Go into the lobby, one of the conservatory bits, and you see chairs that might be Starck, and a blue sculpture (a Giacometti that has put on weight) that is one of several specially done by local sculptor Igor Ustinov, son of Peter.

A few beaded curtains and lots of white orchids and vitrines for such brands as Blancpain add to the style (well, you cannot come to Switzerland without encountering watches galore, pussy). 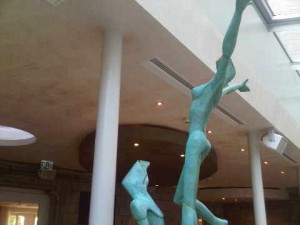 Blancpain, part of the Swatch Group, sponsors the hotel’s 1928-vintage slipper launch, that can take you and up to nine of your friends for your own trip around the lake.  You might, alternatively, go shopping in town, or even head to the Olympics Museum.

And when you get back, to your temporary home, it is a very comfortable feeling.  This may be a chateau but you expect to see your family dogs rush out to welcome you back.  Four of the 50 bedrooms occupy entire floors of the original tower.

Wake up in 516, one of these, and you look out at the lake, 20 yards away, and distant mountains. The windows open easily, for lots of fresh air. Your bed here is surrounded, as a four-poster, by ceiling-hung curtains of finest net, love such design touches as a metal-wire hatstand and a tall plinth that looks like a Bang & Olufsen sound box but is a mirror.

Cleverly, a stunning Hermès scarf is framed in gold, on one wall. WiFi is free, throughout the whole hotel. Jean-Jacques Gauer, the big boss of the Lausanne Palace group, knows what makes a travellin’ gal happy. 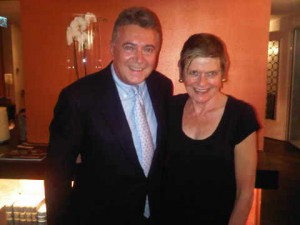 Breakfast reminds you this is Switzerland, and of course it is dairy-heavy. There are Emmi yoghurts and lots of mueslis, and plates of cheeses, and some of the freshest juice in a long while.

The coffee, not surprisingly, is from a big-size Nespresso machine but the jams, including a chocolate paste, are French, and some of the china is German.  Well, this has been an international hotel for some time.

As a plaque in the lobby bar proclaims, this was where the Treaty of Lausanne was devised, discussed and finally signed, in the nine months leading to its eventual proclamation of July 24th, 1923.

This was the treaty that ended the animosity left over from 1914, between Turkey and most of the rest of the world.  This defined the borders of Turkey, which gave up claims to any other parts of the former Ottoman Empire. A bit of history, a bit of art, and a sensational hotel, all in day’s work for girlahead.