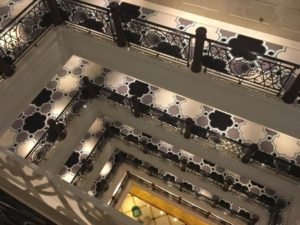 Looking down, from the sixth floor corridor

Not many luxury hotel groups have realised the importance of a big clock, not only to tell the time to everyone who is interested but also to provide a meeting place – the gal thinks how useful the lobby clock is at Fairmont Royal York in Toronto, for instance. Clocks in lobbies of Swissôtels around the world have a similar function, as do clocks in lobbies of all Waldorf Astoria (look at the lobby of the original Waldorf, in New York, and there are invariably people hanging around trying not to look as if they are hanging around, waiting for a contact who is probably late). 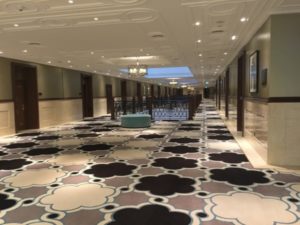 And looking along that corridor

The clock at Waldorf Astoria Ras Al Khaimah, UAE, is different, however. Look at a close-up, above, and you see how its shaft has five different times, marked both in English, as here, and round the other side in Arabic. The clock recalibrates itself every midnight to show the five exact Muslim prayer times for the new day. It was made, and is maintained, by Smiths of Derby and a clock technician comes from England every year to give it a once-over. This is a hotel, by the way, that is very popular with locals: at least 40% of its business is from Emiratis who love retreating an hour, say, from Dubai for the comparative calm of Ras Al Khaimah. 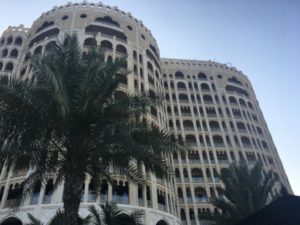 Look up at the 23-floor hotel at the palace-like structure. The top floors are taken up by a magnificent two-floor, two-bedroom Imperial Suite, all of 4,600 sq ft: below are four all-floor Royal Suites, and below them, namely up to the 17th floor, are 346 rooms (smallest size 560 sq ft) leading off long corridors open to the ground below. All the rooms have balconies, but you may prefer not to sit out there as it is generally really hot, and by opening the French windows you may well let in unwanted humidity. But go out, at least quickly, to look down at the beautiful pools, with cabanas around, and the pristine beach. 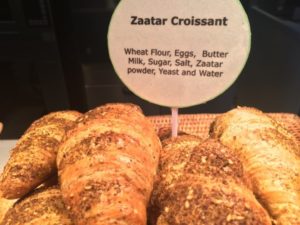 You do not need to leave this luxury hotel. You have a choice of eating, from Italian to Japanese, from steaks to modern-Arabic. We chose that, Marjan’s new-style Middle East cuisine, interpreted by Sasa Nasernia, from Japan, and yes, I tried a gazelle steak, which was new, to me. I wanted to remind myself that Middle East cuisine is not all heavy. And after that I went back up to 630, a sea-view King Suite, for what proved to be a good night’s sleep. SEE THE VIDEO BELOW FOR A PANORAMA OF MY ROOM.