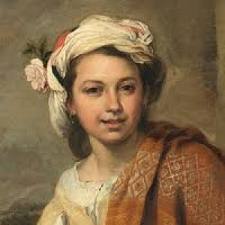 A ‘late Raphael’, showing in the Prado, Madrid, this Summer

There is so much going on in Madrid this summer that any culture-vulture ought to rush there.  Right now the Museo Nacional del Prado has Late Raphael, on until September 16th, 2012.  We all know Raphael, but my goodness, did we all know he died on his 37th birthday, in Rome?

How could he, wonders the gal, have achieved so much in such a short time. (For the record, he was born Raphael, or Raffaello Sanzio, on April 6th, 1483, in Urbino, Italy – a long way from the Amalfi coast, where we were only a week ago…)

And, running until the same date this year, the nearby Museo Thyssen-Bornemisza has a retrospective of the American realist artist Edward Hopper, 1882-1967.

One of his most popular works is Automat 1927, which shows his wife Jo, but somewhat changed. 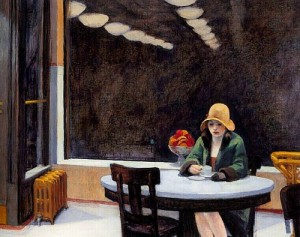 Apparently Jo was 44 in 1927, and she appears much younger, and while she was in fact rather ample, this enigmatic female is flat-chested.  The work was first displayed on Valentine’s Day 1927 at a New York gallery and it sold for $1,200, a considerable sum in those days.  It has been lent to the Madrid exhibition by Des Moines Art Center, Iowa.  (Museo Thyssen-Bornemisza is currently fighting a potential scandal. One of its treasures, Constable’s The Lock, was bought in 1990 by the late Baron, whose daughter Francesca Von Habsburg says would have never sold it on. But his grasping widow says, despite owning nearly £700 million worth of Gauguin, Miro, Monet, Picasso and the like, says she needs the money. Sir Norman Rosenthal, a museum board member, will resign.)

Right, all ye who hanker after the finer things of life, which of course include art appreciation.  There is only one luxury hotel for you now, The Ritz Madrid, set bang in the middle of these two exhibitions.  It is right next door to the Prado and only a few minutes’ walk from the Thyssen-Bornemisza. 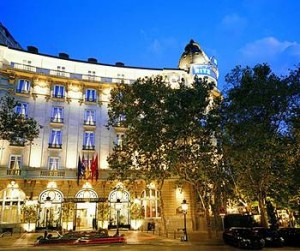 Of course The Ritz Madrid – an Orient-Express hotel and part of Leading –  has a story to tell, as you would expect.  Opened in 1910 by the King of Spain, Alfonso XIII, it became one of Les grand hotels Européens, together with the Ritz Hotel Lisbon and, presumably The Ritz Paris.  The name was licensed from the family of César Ritz.

The hotel passed through various owners until it was sold in 1989 to the Aga Khan’s CIGA Group, whence it passed to Starwood, who ran it as a Le Méridien hotel.  In April 2003 it was handed over to its present marvellous management, Orient-Express, who now co-own it, 50-50 with Omega Capital, in which the famous industrialist and philanthropist (and art collector) Alicia Koplowitz has more than a passing hand. 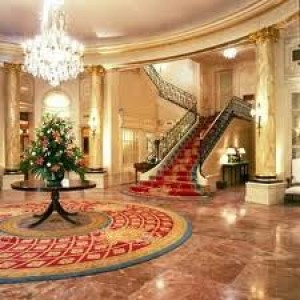 The grand staircase leading from the front lobby

It is glorious.  The six-floor building, by architects Charles Mewès – who did lots of other Ritzs – and Don Luis de Landecho, has gargoyles high above the Plaza de la Lealtad entrance.  Inside, the grand lobby, with a big chandelier over, has a stately staircase, 16 steps up to the first landing, that is ideal for ladies of court, and wedding couples, to process down.

Actually it is up to that first landing that, somewhat surprisingly, one heads to the spa (Le Cinq Mondes again, this brand needs to be taken really seriously) and the Technogym fitness, 24 hours of course.

Orient-Express thinks of its global guests. Head up another 21 carpeted stairs to the first-floor (British style), and there you find suite 124.  Like all its 166 siblings, this room is Rococo-comfy, with lush open-style curtains falling down as the bedhead, and plush carpeting that has an all-over pattern of near lifesize baby lambs on a squashed tomato (colour) background. 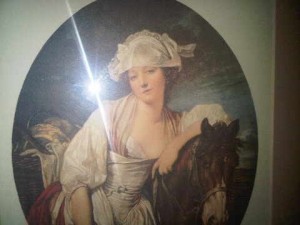 Lady with horse, by your bed

The many wall prints, including a rather endearing lady with a black horse, are mostly in elaborate gold frames.  The lights have ogee-shaped frames. The bathroom fittings are gold. Comfy is the word that springs to the fore, however.

The bathroom has a heated electric rail, and excellent lighting to use the Bobbi Browns that one purchased yesterday at good-price duty-free – the place to spend on cosmetics without feeling guilty.  The bed, ultra comfy of course, is made up with real linen, exquisitely embroidered with the hotel’s coat of arms logo – in white, fortunately.

You can order what pillows you want, as is the norm in top hotels these days.  But, unusually, the pillow menu shows a little baby, sleeping. 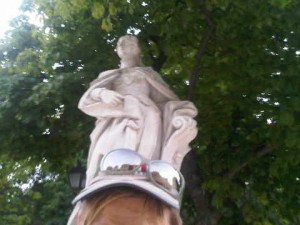 Donna Urcadda, born 1146, with a pair of 21st century runner’s glasses in front

So after a good night’s sleep it was up with the lark, and up to the park.  Out of the hotel, after two minutes turn right up Antonio Maura, and past banks of banks, all with ATMs and not a single sign of the vandalism that the horrid world media would have you think is the norm in Spain these days.

At the top of Antonio Maura, cross Alfonso XII to get into Parque del Retiro.  Now run straight ahead, along one side of Paseo de Argentina, with immaculate box-hedge parterres and some rose beds down the centre and, either side, 13 historic sculptures on plinths.

At the far end you come to a big lake with, at the far side, a monumental memento to dear old Alfonso XIII, he who inaugurated the hotel… 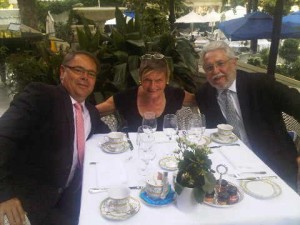 About to breakfast on the hotel’s sensational summer terrace, Filip Boyen, left, and boss of this hotel-that-works, Anton Kung

.. to which one now returns, for a quick shower using the Penhaligon’s and, now that summer is here, a breakfast table on the outside terrace.

The hordes of culture-seeking American and other tourists who are keeping this luxury hotel delightfully full (yes, book ahead!) exclaim over the fresh juice that Tropicana just cannot duplicate back home, while others exclaim at the local wholewheat bread and oh, the Colombian coffee.

And guess what, some lucky one just happens to run into two close friends also sitting on the terrace.  Sorry Raphael and Hopper, you will have to wait.