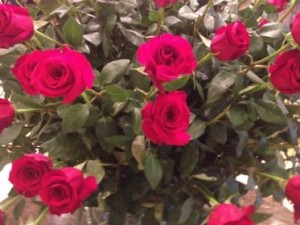 Roses in the lobby of Swissôtel Quito

But we are here in Quito, the capital of Ecuador, and the gal is told that by order of President Rafael Correa, an economist, all hotels must display roses in their lobby. Ecuador is variously said to be the top, or at least among the top, exporters of roses. At top luxury hotel Swissôtel, the roses are changed every week, but certainly during my stay they always looked pristine. Ecuador is very much for Ecuador’s products. The snacks on domestic planes are local, probably salt-free banana or vegetable chips, the chocolate is local, and the people working in hotels are, with the exception of the Peruvian GM and the Italian chef, Ecuadorian. 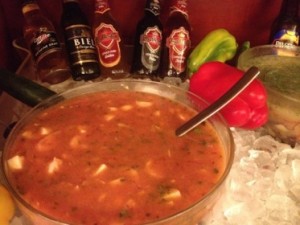 Ceviche and beer for breakfast…

The Ecuadorians are lovely people, and intensely nationalistic. Saturday and Sunday morning, brunch in Swissôtel’s Café Quito includes a ceviche bar, which attracts some 200 local enthusiasts every morning. Ceviche, or the cebiche of La Mar in the gorgeous Mandarin Oriental Miami, is growing in popularity worldwide, although not generally at breakfast. Here in Quito however no hour is too early for marinated raw seafood, especially if it comes with a range of domestic beers, say Club Premium Negra. But the breakfasts every day are outstanding at Swissôtel Quito. 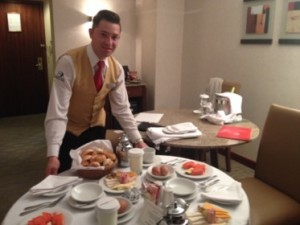 Café Quito has the most prolific of the offerings, a gigantic open-square buffet that has everything you can think of, including a live chef.   Sensibly, this starts at five, which is jolly thoughtful for those leaving for early flights – Mariscal Sucre airport is an hour’s drive away. You can also breakfast up on the top-floor, if you have been clever enough to buy a club-access room: there is a chef up here, too. And if you have a REALLY early flight, as I did my last night, room service offers a Swiss breakfast from four a.m. It arrived on the dot, with a charming young man who told me his name, set up a table. I had half a pint of drinking yoghurt, juice, my choice of fresh fruit and eggs, and a plate of rolled hams and cheeses, with walnuts, a big thermal pot of good coffee, and a basket of warmed croissants, Danish and bread rolls. 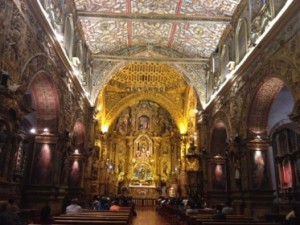 One of the many churches on a city tour

On the previous day, I naturally had to take a city tour, at least to visit the Old Town. Quito has two unique features. It is the world’s highest capital, at 9,350 feet above sea level (Bolivia’s capital is legally not La Paz, at 12,087 feet above sea level, but Sucre, down in the lowlands to the east – it is only 9,219 feet above sea level). Quito also has a snake-like shape, 40 miles long by under three miles wide – there is no metro, but six main roads run north to south. For tourists, however, luxury hotels sensibly merely suggest visiting the Old Town, four by four kilometres total, for its straight and narrow cobbled roads that rise and fall as a switchback. This is where you find the Church of San Francisco, La Compania and a myriad other beautiful churches, and more…