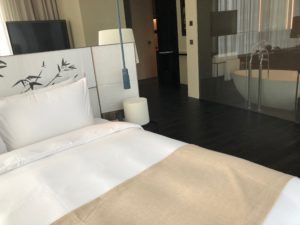 Shanghai is one of those world cities that seems to launch new luxury hotels with every new moon, and of course all of them seem to be successful in an environment that craves the latest, and innovation abounds. The gal was lucky enough to visit two of these just-opened.  First was Middle House, latest in Swire Hotels’ Collective range. The car swung into a slate and real bamboo oasis, surrounded by highrises. Inside the 111-room hotel designer Piero Lissoni seems to have blossomed: yes, there are his signature dark colours and sombre tones, here and there, but there are also such delights as a coffee corner, shown above.  And he has cleverly put the beds in the centre of rooms, with high-enough bedheads really to become ‘walls’ separating working from sleeping space. 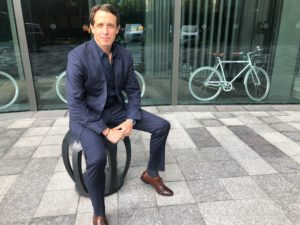 GM Michael Faulkner, seen here in that arrival courtyard – in front of the hotel’s Ulac bikes – showed me how the 14-floor hotel block connects below ground to another block, which has 102 serviced apartments. Along the walkway is a splendid eight-room spa, which uses LVMH’s new products, Cha Ling Ancient Pu’er tea cosmetics, harvested in Yunnan. Bedrooms In both blocks use Bamford, and there are Illycaffè espressos.  I especially liked the hotel’s two-room Penthouse Suite, on the 14th floor – with a round dining table to seat six, it is probably also used for small meetings.  Three other notable features at Middle House: every room has a simple attached-to-ceiling cord by the bedside, the master switch (Faulkner calls this ‘Mr Goodnight’); a Café Gray, as in Hong Kong’s Upper House; and, in the complex’s integral HKRI Taikoo Hui shopping mall, the world’s largest Starbuck’s Reserve Roastery. 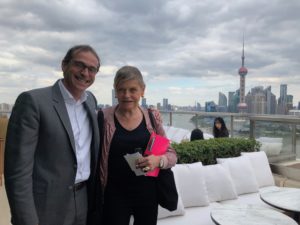 And then it was off to EDITION Shanghai, which opened this July. This is another entertainment place that happens to have rooms, in fact 147 of them.  Particularly fascinating was the way GM Ronan Henaff, from Brittany, relayed how EDITION founder and leader Ian Schrager is in control of everything – he appears to check how far down the ceiling-hung living garden rods actually hang, for instance.  The really good EDITION newspaper, an A4 sheet presented folded in half, has a quote from Schrager: ‘to turn a hotel into a destination you need a unique experience that touches people in some personal, emotional and visceral way’. 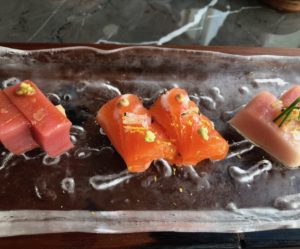 Ian Schrager has obviously had a close hand not only in putting in rooftop lounges on both of the hotel’s towers, and, inside, a Club lounge, a red-hued night club and a screening room. There are also restaurants, lots of them, which is just fine for Ronan Henaff who was previously GM of Shanghai’s multi-use Three on The Bund.  Today, he hosted lunch at EDITION’s Japanese restaurant, Hiya, on the 27th floor – it is run by Brit Jason Atherton, who also runs this modern-luxury hotel’s ground floor Shanghai Tavern.  The sashimi, in particular, was absolutely ace.