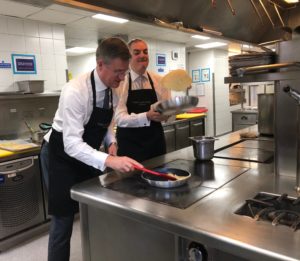 There were multiple reasons to pop quickly into one of London’s ‘relaxed luxury’ havens, The Langham hotel, five minutes’ walk north of Oxford Circus. For a start, MD Bob van den Oord – who still harbours a childhood ambition to be a mayor – was flipping pancakes to celebrate Shrove Tuesday. Both his Nutella pancake and the traditional sugar and lemon one produced by his Hotel Manager, Nicholas Davies, were deemed to be great successes, said the assembled spectators. The gal was there to see the hotel’s gorgeously tweaked lobby – see the video below. With flowers by The Langham’s own Argentinian florist, Adrian Ghione, who was originally hired as a housekeeping porter, and a soft ginger-flower perfume, and art and books, this lobby is now absolutely gorgeous. 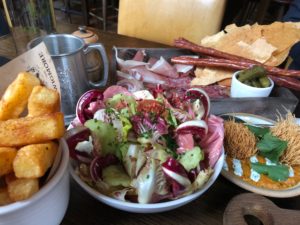 When I was last at the hotel the former bank on the corner of the hotel was spa reception. In August 2017 it metamorphosed into an English pub, The Wigmore. When Swedish designer Martin Brudnizki first saw the space apparently he said lovely, it will be entirely racing green, and that is what he has done, painted walls and ceiling in this rich hue. He deliberately left uneven patches on walls to suggest age. There is a prominent central bar (see above) and two adjacent snugs, both of which can be sectioned off for parties. Seating a total 150, The Wigmore has masses of regulars, local business people popping in for lunch, and after work, and hotel guests love it. Bob van den Oord says it really does sell hotel rooms, especially to Americans and Russians. 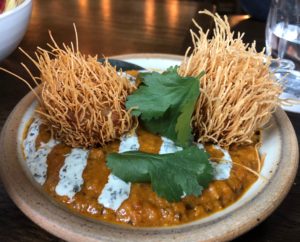 Gorgeous Group helped with drinks, which include glass wines from £5.25 to £29, the latter for Amarone Monte del Fra Veneto. The daily-changing food menu often includes buttered crumpets with steamed cock crab, Cannon & Cannon cured meats, and masala-spiced scotch eggs, plus what I would call must-have thick fat chips dusted with Bloody Mary butter. Michel Roux Jr, who is consultant to the hotel, devises the menu here. I loved the way Scotch eggs, spiced with Masala, look like prickly sea urchins. An order of ‘XXL stovetop 3 cheese & mustard toastie’ came as a long baguette held under a lid specially made at Netherton Foundry near Ironbridge, Shropshire, where iron production in England started. Bringing the story-telling forward to today, the whole toastie presentation comes on a platter made in one of the establishments housing citizens detained ‘at Her Majesty’s pleasure’. 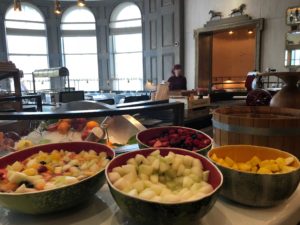 There are so many stories at this lovely luxury hotel. Artesian cocktail bar, named for the 360-foot well under the hotel, has a charismatic new Parisian mixologist, Remy Savage. The adjacent all-day Landau restaurant, designed, like Artesian, by David Collins Studio, re-opened February 14th, 2018, after a tweak that saw a couple of central tables replaced by a a central serving counter, a hollow oval. This allows a chef to stand inside the oval for live cooking, and guests can sit up at one of 18 counter chairs, an ideal service for those who like chatting to the chef and also for single diners whom, I sincerely believe, feel more at ease sitting ‘up’ as they can more easily ‘escape’ if they feel the need to get away from others. Anyway, all these experiences came rushing at me during a remarkably short visit to this luxury hotel that never seems to stand still. Goodness knows what Bob van den Oord, who actually is ‘mayor’ of the operation, would be up to were he running, say, Amsterdam. NOW SEE THE BEAUTIFUL LOBBY, BELOW